This article is about a computer input device. For the teaching and presentation aid, see Pointer (rod). 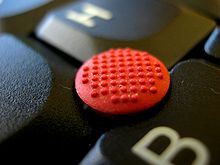 Pointing stick on a Lenovo ThinkPad. 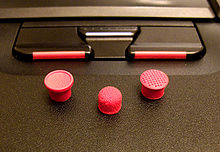 The pointing stick (trademarked by IBM as the TrackPoint and by Synaptics as the TouchStyk) is an isometric joystick used as a pointing device (compare especially touchpad and trackball). It was invented by research scientist Ted Selker. It is present on many brands of laptops, including Lenovo's line of ThinkPad laptops, Toshiba Tecra laptops, HP business notebooks and on Dell Latitudes under the name of Track Stick. It has also been used on computer mice and on some desktop keyboards (as an integrated pointing device).

The pointing stick operates by sensing applied force (hence it is also known as an isometric joystick), by using a pair of resistive strain gauges. The velocity of the cursor depends on the applied force. On a QWERTY keyboard, the stick is embedded between the 'G', 'H' and 'B' keys, and the mouse buttons are placed just below the Spacebar. The mouse buttons can be operated right-handed or left-handed due to their placement below the keyboard along the centerline.

The pointing stick has a replaceable rubber cap, traditionally red on the ThinkPad but also found in other colors on other machines. The cap can be a slightly rough "eraser head" material (Classic Dome) or other optional shapes (Soft Dome or Soft Rim).[1]

The sensitivity of the TrackPoint is usually adjustable, and can be set to provide an extremely light touch.

Press-to-select is an optional feature, where a sharp tap on the pointing stick is equivalent to a button-click. The button thus clicked can be configured to be 1, 2 or 3. However, it is quite easy to accidentally click the mouse when typing.

Together with software wheel-emulation, the Trackpoint (and 3 buttons) can provide almost the entire behavior of a 3-button, 2-wheel mouse. Tapping button-2 will generate a middle-click; holding button-2 while simultaneously moving the pointer will generate vertical and horizontal scrolling events.

Cursor drift is a ubiquitous problem among pointing sticks, requiring frequent recalibration. However, TrackPoints automatically recalibrate when the stick recognizes a steady cursor drift; to trigger a recalibration, the user must lift his or her finger temporarily off the TrackPoint for about 1 second.

The concept of TrackPoint was created in 1984 by Ted Selker, a PARC researcher. He learned about a study that demonstrated that it takes relatively long time, three-quarters of a second, for a computer user to shift his hand from the keyboard to the mouse, and as much time to shift back. Ted Selker wanted to construct a device that would largely eliminate this delay. Selker built a model of a pointing stick, but actually had no time to work on it. Three years later, working at IBM, Selker was able to refine the TrackPoint design and transform his invention into a product.[4] IBM was issued the US patents in 1996.[5][6] 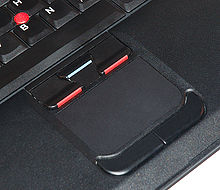 The pointing stick can be used in ultra-compact netbooks (see Sony Vaio P, for example)[7] where there would be no place for a touchpad.

The pointing stick is positioned such that the hands do not need to be removed from the home row to manipulate the mouse pointer.[8]

Some users claim it is easier to finely position the pointer than when using a touchpad because there is virtually no 'dead zone'. Some users feel that pointing sticks cause less wrist strain, because user does not need to avoid resting wrists on a touchpad, usually located just below the keyboard. Some people find them more appealing for mobile gaming than a touchpad, because the track-point allows infinite movement without repositioning.[8]

One criticism is that because the pointing stick depends on the user applying pressure, it can cause hand cramps (although this can be partly solved by setting the sensitivity to high, and lifting the finger when the pointer is not being moved). Another criticism is that it stresses the index finger and may lead to repetitive strain injury. In addition, a finger slipping off of the stick can lead to accidental pressing of one or more keys in immediate proximity.

A number of ergonomic studies to compare trackpoint and touchpad performance have been performed.[9][10][11] Most studies find that touchpad is slightly faster; one study found that "the touchpad was operated 15% faster than the trackpoint."[11] Another study found that average object selection time was faster with a touchpad, 1.7 sec compared to 2.2 sec with a trackpoint, and object manipulation took 6.2 sec with a touchpad, on average, against 8.1 sec with trackpoint.[12]

These studies measured pointing performance only and cannot verify or disprove the claim that trackpoint is faster in a mix of pointing and typing actions. It is also unknown whether or not the studies took into account differences in the learning curve between each device or each device's sensitivity setting.

In attempting to avoid trademarked names and the ambiguity of the term "pointing stick", which commonly refers to a stick used to point at chalkboards or flip charts, various informal names have been invented, including "nipple mouse", "nub", "eraser mouse", "joy button", "clit mouse", and "keyboard clit".[13]