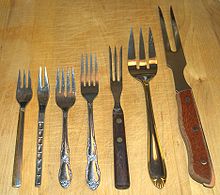 As a piece of cutlery or kitchenware, a fork is a tool consisting of a handle with several narrow tines on one end. The fork, as an eating utensil, has been a feature primarily of the West, whereas in East Asia chopsticks have been more prevalent. Today, forks are increasingly available throughout East Asia. The utensil (usually metal) is used to lift food to the mouth or to hold food in place while cooking or cutting it. Food can be lifted either by spearing it on the tines, or by holding it on top of the tines, which are often curved slightly. For this latter function, in the American style of fork etiquette, the fork is held with tines curving up; however, in continental style, the fork is held with the tines curving down.[citation needed] A fork is also shaped in the form of a trident but curved at the joint of the handle to the points.

Bronze forks made in Iran during the 8th or 9th century.

The word 'fork' comes from the Latin furca, meaning "pitchfork." The ancient Greeks used[1] the fork as a serving utensil, and it is also mentioned in the Hebrew Bible, in the Book of I Samuel 2:13 ("The custom of the priests with the people was that when any man offered sacrifice, the priest’s servant came, while the fresh flesh was boiling, with a fork of three teeth in his hand..."). Bone forks had been found in the burial site of Qijia culture as well as later Chinese dynasties' tombs.[2]

In the Roman Empire, bronze and silver forks were used, indeed many examples are displayed in museums around Europe.[3][4]. The use varied according to local customs, social class and the nature of food. In the western area, the fork is only occasionally mentioned in high medieval sources linked to Byzantium. It was not commonly used in Western Europe until the 16th century when it became part of the etiquette.

Before the fork was introduced, Westerners were reliant on the spoon and knife as the only eating utensils. Thus, people would largely eat food with their hands, calling for a common spoon when required. Members of the aristocracy would sometimes be accustomed to manners considered more proper and hold two knives at meals and use them both to cut and transfer food to the mouth, using the spoon for soups and broth.[citation needed]

The earliest forks usually had only two tines, but those with numerous tines caught on quickly. The tines on these implements were straight, meaning the fork could only be used for spearing food and not for scooping it. The fork allowed meat to be easily held in place while being cut. The fork also allowed one to spike a piece of meat and shake off any undesired excess of sauce or liquid before consuming it. Wider use of the table fork in Western Europe was facilitated by two Byzantine imperial princesses who married into the Western aristocracy: the Empress Theophanu, wife of Emperor Otto II, in 972, and the Dogaressa Teodora Anna Dukaina Selvo, wife of the Doge of Venice Domenico Selvo, in 1075.[citation needed]

By the 11th century, the table fork had made its way to Italy. In Italy, it became quite popular by the 14th century, being commonly used for eating by merchant and upper classes by 1600. It was proper for a guest to arrive with his own fork and spoon enclosed in a box called a cadena; this usage was introduced to the French court with Catherine de' Medici's entourage. In Portugal, forks began being used with Infanta Beatrice, Duchess of Viseu, king Manuel I of Portugal's mother [5]. That happened around 1450.

Long after the personal table fork had become commonplace in France, at the supper celebrating the marriage of the duc de Chartres to Louis XIV's natural daughter in 1692, the seating was described in the court memoirs of Saint-Simon: "King James having his Queen on his right hand and the King on his left, and each with their cadenas." In Perrault's contemporaneous fairy tale of La Belle au bois dormant (1697), each of the fairies invited for the christening is presented with a splendid "Fork Holder."

The fork's adoption in northern Europe was slower. Its use was first described in English by Thomas Coryat in a volume of writings on his Italian travels (1611), but for many years it was viewed as an unmanly Italian affectation. Some writers of the Roman Catholic Church expressly disapproved of its use, seeing it as "excessive delicacy": "God in his wisdom has provided man with natural forks — his fingers. Therefore it is an insult to Him to substitute artificial metallic forks for them when eating."[6][7] It was not until the 18th century that the fork became commonly used in Great Britain, although some sources say forks were common in France, England and Sweden already by the early 17th century.[8][9] The curved fork that is used in most parts of the world today, was developed in Germany in the mid 18th century. The standard four-tine design became current in the early 19th century.

The 20th century also saw the emergence of the "spork", a utensil that is half-fork and half-spoon. With this new "fork-spoon", only one piece of cutlery is needed when eating (so long as no knife is required). The back of the spork is shaped like a spoon and can scoop food while the front has shortened tines like a fork, allowing spearing of food, making it convenient and easy to use. It has found popularity in fast food and military settings.

A fork used for picking up very thin slices of meat. This fork is shaped like a regular fork, but it is slightly bigger and the tines are curved outward. The curves are used for piercing the thin sliced beef.

A two-pronged fork used to hold meat steady while it is being carved. They are often sold with carving knives or slicers as part of a carving set.

A two-pronged disposable fork, usually made out of sterile wood (though increasingly of plastic), specifically designed for the eating of chips (known as french fries in North America).

A small fork resembling a trident, used for spearing cocktail garnishes such as olives.

Any of several different special types of forks designed to eat desserts, such as a pastry fork. They usually have only three tines and are smaller than standard dinner forks. The leftmost tine may be widened so as to provide an edge with which to cut (though it is never sharpened).

A narrow fork, usually having two tines, long shaft and an insulating handle, typically of wood, for dipping bread into a pot containing sauce

A fork used which is used to pick up pieces of fruit such as grapes, strawberries, melon and other varies types of fruit.

A utensil combining characteristics of a knife and a fork

A long handled fork used for extracting pickles from a jar, or an alternative name for a ball joint separator tool used to unseat a ball joint.[10]

Similar to a regular fork, but may be shorter, or have one of the outer tines shaped differently. Often, a "salad fork" in the silverware service of some restaurants (especially chains) may be simply a second fork; conversely, some restaurants may omit it, offering only one fork in their service.

A utensil combining characteristics of a spoon, a fork and a knife

A utensil combining characteristics of a spoon and a fork

A fork, usually having two tines, very long metal shaft and sometimes an insulating handle, for toasting food over coals or an open flame 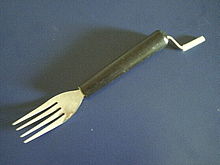 A long-tined fork with a telescopic handle, allowing for its extension or contraction.

A fork with a metal shaft loosely fitted inside a hollow plastic handle. The shaft protrudes through the top of the handle, ending in a bend that allows the metal part of the fork to be easily rotated with one hand while the other hand is holding the plastic handle. This supposedly allows spaghetti to be easily wound onto the tines. Electric variations of this fork have become more prevalent in modern times.

This audio file was created from a revision of Fork dated 2006-05-10, and does not reflect subsequent edits to the article. (Audio help)
More spoken articles