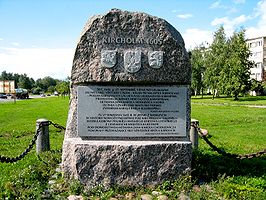 pronunciation (help·info); German: Kirchholm) is a town in Latvia, the administrative centre of Salaspils municipality. The town is situated on the northern bank of the Daugava River 18 kilometers to the south-east of the city of Riga.

Salaspils is one of the oldest settlements in Latvia. Archaeological excavations of 1964-1975 (during the construction of Riga HES) in ancient settlements, burial grounds and castle mounds give evidence of very dense population of the region. At this time, the remains of 11,000-year-old reindeer hunters were found (the oldest known human settlement in all of Latvia) and 3500-year-old remains of Baltic hunters, buried in hollowed out oak-tree trunks, were found as well. There is evidence that both Livs and Balts built hill forts in the region.

At the end of the 12th century, German crusaders and merchants travelled up the Daugava, establishing missionaries among the Liv settlements. One important Daugava Liv centre, the small island Mārtiņsala (German:Kircholm) had a Christian church as early as 1186. So began the Christianizing and gradual subjection of the local Liv tribes – took place. In 1206 the Liv chieftain Ako organized the first revolt against the German crusaders but suffered defeat.

In 1380 the Livonian Order built Salspils castle (Neu-Kircholm) on the mainland, with St George’s church by it. The castle was an important support-point outside of Riga, and a small town grew up around it. Both the castle and village were destroyed in 1577 during the Livonian War.

In 1605 the village was a site of the Battle of Kircholm in which forces of the Polish-Lithuanian Commonwealth defeated a much more numerous army of Sweden. This was the biggest battle of the Polish-Swedish war. The battle took place near St George’s church and about 9000 Swedish soldiers were buried there. Two memorial stones in Salaspils commemorate of one of the biggest battles in Europe in the 17th century – in memory of the victory of the Polish-Lithuanian forces. Up to the second part of the 20th century a magnificent 17th century military fortification near the Daugava – the Swedish rampart. The destroyed church was renovated in 1631, but later – in 1896 and 1923 - rebuilt.

In the 17th-19th century the surrounding area of Salaspils was governed by the Salaspils Estate which, was established near the destroyed Order’s castle and was a part of Riga since 1630, and the Kurtes Estate which was situated in the territory of present Līvzemes street in Salaspils.

The Riga – Daugavpils railway opened in 1861, and the new center of the town developed near Salaspils station just opposite the Kurtes Estate. In the second part of the 19th century, military summer camps were organized in the territory of Salaspils and an Orthodox church was built into a garrison. During the World War I, the front line was at Salaspils for two years, and many of the buildings and farmsteads, especially along the river, were destroyed. The infamous battles at Nāves Sala and Mazā Jugla were fought nearby.

During the first Republic of Latvia there were three parishes in Salaspils territory – Stopiņi, Salaspils (Ķesterciems) and Dole.

During World War II, the Nazis established Stalag-350-s, a camp for Soviet prisoners of war, in Salaspils. Two km outside of the city, in the nearby forest, the Nazi SS also established the largest civilian concentration camp in the Baltics. The exact numbers of those who died at Stalag-350-s is the subject of ongoing debate. According to a report compiled in 1944 by the Soviet authorities, 43,000 captured Red Army personnel were either killed or died from diseases and starvation there.[1] Three other numbers have been mentioned in accounts published subsequently by Soviet historians. The history of the Latvian SSR printed in 1959 claims 56,000 people were killed. The Little Latvian Encyclopedia published in the 1970s claims 53,000 were killed. History textbooks published in the 1980s by the Soviet Union claim that over 100,000 people were killed in Salaspils. Similarly, archival documents of Soviet provenance recently published in Russia estimate the total number killed in Salaspils concentration camp to be 101,000.[2] Recent scholarship produced outside Russia questions the magnitude of these Soviet-era figures. The Latvian historian Heinrihs Strods[1] and the German Holocaust historians Andrej Angrick and Peter Klein[3] conclude that a more a realistic number of deaths at Salaspils is 2,000–3,000 in total, including children. At the site of Stalag-350-s, a major monument complex in remembrance of the Soviet victims of Nazism was opened on 31 October 1967.

Camp survivor H. Baermann, who was imprisoned at Salaspils from December 1941 to August 1942, reported that in this period 15,000 persons passed through the camp, and almost all of them were killed, only 192 survived.[4] According to another eye-witness account, by E. K. Salijums, Soviet children in particular were annihilated by the Nazis through "medical experiments", from which some 150 children died each day.[5] In total from 1942 to 1944 some 12,000 Soviet children passed through the camp, most of them being tortured by pumping out their blood (500 grams from each).[6] In one of the burial places by the camp, 632 corpses of children of ages 5 to 9 were revealed, with total number of Soviet children killed in the camp estimated to be 7,000.[7]

As indicated in the notes and elsewhere [2], the civilian and military concentration and death camp victims, children and adults, Latvian and "Soviet," civilian and POW, included Jews. {See also [8]

During the late 1950s and early 1960s, various industrial enterprises and governmental institutions developed in Salaspils, such as the nuclear plant and four branches of the Academy of Science. Large multi-storied housing blocks appeared to house incoming power plant workers, many of whom were Russians. In a few decades Salaspils transformed from a very peaceful rural settlement to a mikroraion-style town. Due to the rapid development, Soviet authorities ordered construction of the Riga HES and Riga TEC-2. The dam created a massive reservoir that flooded monuments of Salaspils ancient history. The last unsubmerged sections of old Salaspils have been preserved at Salaspils railway station.

Due to the industrial development of Salaspils, the population has reached 21,000. As of 2000 census, 42% of population is Latvian, 42% is Russian and 16% belongs to other ethnic groups.

The National Botanical Gardens occupy 129 ha in the northern part of Salaspils between the railway and former peat extraction site. The National Botanical Gardens are famous for their richest plant collection in the Baltic States, as well as they have one of the biggest arboretums in the world. The gardens are open to visitors, their territory is used as a walkabout place by the inhabitants of Salaspils.

The reactor site is located in the forest, to the west of the institute of physics, in the northeastern part of the town. The reactor was operational from 1969 to 1998. The plant partook in neutron activation analysis and gamma irradiation for various materials. It was a pool-type reactor. It is now being demolished.