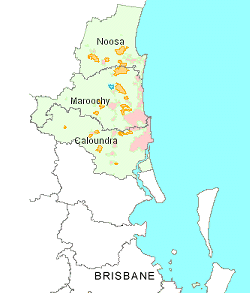 caption =
pop = 290,645* (2005)The Sunshine Coast (population 290,645 with up to an additional 50,000 in visitors and seasonal workers) is a coastal region located in , north of the capital of . The Sunshine Coast has recently been united into a single Local Government Area, the .

The Sunshine Coast is bordered by the Pacific Ocean in the east, and extends to the local government boundaries beyond the to the west. Occasionally, the towns of Gympie, which is 30 minutes' drive north of Noosa Heads, and Caboolture, 30 mins drive south of Caloundra, have been included in a broader definition of the Sunshine Coast region.

Since the Glass House Mountains were first sighted by from the deck of in 1770, the Sunshine Coast's history has been as diverse and colourful as its scenery.

The Sunshine Coast's first white inhabitants were three castaways who shared the life of the Aborigines for 8 months; it became the home of numerous runaway convicts who preferred life among the Aborigines to the living hell of the Moreton Bay Convict Establishment; it was the scene of some of the most bitter skirmishes of Australia's ''.

Timbergetters used its rivers and lakes as seaways to float out their great logs of cedar, gold diggers scaled its mountains to reach the Gympie gold. With the coming of the railway line to Gympie, the coastal towns, founded as ports for its early river trade, were bypassed, and grew slowly into quiet holiday resorts whose peace remained undisturbed until the development boom of the 1960s and 1970s - just 200 years after Cook had passed that way.

Localities and suburbs within the Sunshine Coast region include Maroochy Shire suburbs such as Mooloolaba, Alexandra Headland, Maroochydore, Buderim and Nambour. The Sunshine Coast also produces many varieties of and nuts and, until recently, .

The region is characterized by beautiful beaches, expansive coastal views and rich fertile soils in the hinterland. Many World and Australian-renowned beaches are located at Noosa Heads, Alexandra Headland, , Coolum and Kings Beach in . There are popular surfing areas along the beaches and headlands.

The Sunshine Coast is a centre for , containing attractions such as 's , UnderWater World marine park, Aussie World with the Ettamogah Pub, The , Big Pineapple and the Majestic Theatre.

The Sunshine Coast's infrastructure includes, but is not limited to:
*Universities - The major university campus being the , with having a small campus based in Noosa.
*TAFE - five campuses at Caloundra, Mooloolaba, Maroochydore, Nambour & Noosa.
*s - Many varied denomination, private and public primary and secondary schools.
*
*

Nambour Hospital is the region's major hospital and attended to over 35,000 cases in 2005

The car is the dominant mode of transport for Sunshine Coast residents, with the region connected to Brisbane via the . The Nicklin Way & are the major arterial roads, which passes through most major areas of the Sunshine Coast. Many Intercity and interstate coach operators also operate daily bus services to Brisbane using the major corridors.

Flights from the Sunshine Coast depart from 10 km north of Maroochydore and fly direct to , and with , and .

The Sunshine Coast has an extensive public transport network, with QR 's Nambour and Gympie North railway line operating numerous interurban services daily, with most trains running express between Caboolture and Bowen Hills stations. The train lines run through the Sunshine Coast Hinterland, connecting buses run to the coastal strip. Going north beyond Nambour station the trains only run once or twice per day.

Bus services are operated by Sunbus, which operates under the TransLink public transport system, in which buses connects the suburbs and localities within the Caloundra, Maroochy and Noosa Local Government Areas. Noosa Shire Council operates free bus services connecting Noosa Heads to surrounding suburbs and major park and ride stations during the peak summer holiday period.

There is a public ferry that operates between Tewantin, Noosaville, Noosa Waters, Northside and Noosa Heads

Due to its proximity to the beach, the coast has a strong beach culture. Many surfers live on the coast, with beaches such as Mooloolaba famous for their cleanliness and large waves.

There are numerous skate parks on the Sunshine Coast, with one of the most popular being at Alexandra Headland.

There are a number of Youth Groups on the Sunshine Coast, some of the biggest being [http://goodlifeyouth.org/ Goodlife] , [http://www.suncoastcoc.org.au/ Suncoast] , and [http://www.myspace.com/kingsyouth_empire Kings] .