Queensland Rail, also known as QR, is a government-owned railway operator in the state of Queensland. Under the control of the Queensland Government, Queensland Rail operates the inner-city and long-distance passenger services, as well as some freight operations and gives railway access to other rail businesses.

Queensland Rail started business in 1865[2] with the first service carrying school children and dignitaries on the first rail line in Queensland running from Ipswich to Grandchester.[3] 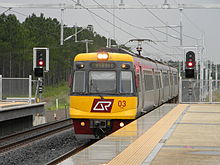 Due to low patronage, lines such as the Pinkenba line have been closed and replaced by bus services known as a RailBus. During some times of the day trains on the Gympie North line and Doomben line are also replaced by the RailBus.

Queensland Rail aims to operate 99.75% of peak services and to have 93.77% of those services running no longer than four minutes late.[4] 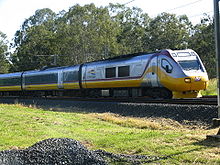 One of the two diesel tilt trains running its route in Queensland.

Traveltrain's annual patronage is approximately 969,000.[5] Whilst proportionately smaller than other regional rail services, relative to population, this is largely as Traveltrain caters to a touring market more so than other operators. In 2007–08, the subsidy for the Brisbane-Cairns route was $130 million, or $900 per passenger. In 2001–02 it was $270.[6][7]

Railmotor 93 running as The Gulflander, stop at Golden Gate near Croydon

Queensland Rail runs tourist trains between Normanton and Croydon as The Gulflander, Cairns to Kuranda as the Kuranda Scenic Railway, and Cairns to Forsayth as The Savannahlander.

As of September 2011 the Queensland Rail fleet consists of the following trains:[8]

On June 2, 2009 the Queensland Government announced the 'Renewing Queensland Plan', with Queensland Rail's commercial activities to be separated from the Government's core passenger service responsibilities, and formed into a new company called QR National Limited.[9][10] The new structure was announced by the State Government on December 2, 2009,[11] and was in place from July 1, 2010.[12]