The Star Kingdom of Manticore (SKM), frequently referred to as Manticore or the Star Kingdom, is a fictional star-nation in the Honorverse series of military science fiction novels and short stories by David Weber and others, published by Baen Books.

The Star Kingdom was founded in the Manticorian system, which consisted of a binary star, three settled planets, and the Manticorian Wormhole Junction. This unique combination of large amounts of habitable planetary real estate and instantaneous travel via the Junction had made the Star Kingdom an economic and diplomatic power house. Indeed, Manticore compared very favorably to most Solarian League systems which have generally been settled longer, and contained higher populations and larger infrastructures, than the Star Kingdom. These factors, and those required to properly exploit them, had resulted in an extensive Manticorian merchant marine and well funded research programs. Manticore had also birthed a very effective navy with a strong tradition of excellence and institutional history. A popular nickname for a native of the Star Kingdom was "Manty" (plural "Manties").

Manticore had begun as a slow boat (sublight ship, also known as an interstellar ark) colony sent from Earth. It was particularly well planned, however, e.g. Manticore Colony Trust was established as well as protection of the colony from claim jumpers. During the 640 years that it took the colony ship Jason to travel to Manticore, developments in gravity technology had made hyper travel safe. Therefore, the arriving colonists found themselves greeted by employees already building infrastructure on Manticore, the most temperate of the three habitable planets orbiting the two stars in the system. Not long thereafter, there was a plague which killed more than half of the population, setting the colony back substantially.

It was in reaction to that circumstance that the aristocratically dominated monarchical polity was begun (the Star Kingdom of Manticore). New colonists invited to make up for the losses of the plague were not intended to be part of the power structure. These colonists were divided into two sets, those who could pay for some or all of their passage (Yeomen) and those who could not (Zero-Balancers). This aristocratic dominance scheme went awry when Elizabeth I, the second monarch, proved to be better at political maneuvering than the nobility. After her, the SKM had an effective monarchy, not merely a constitutional figurehead.

A convention of colony shareholders (the Framers) converted the Corporation's elective board into a constitutional monarchy and crowned Roger Winton King Roger of Manticore on August 1, 1471 P.D. (a primary constitution chartered then).

The Manticoran constitutional law consisted of written constitution and some unwritten tradition, e.g. concerning the Crown powers strengthened by Queen Elizabeth I (1474–1507 P.D.) or some Prime Minister issues. The constitution contained a strong "Declaration of Fundamental Rights" according to which all Manticoran subjects were equal in the eyes of the law, but the franchise to vote was limited to citizens who had paid taxes for at least five consecutive years. The Manticoran monarchy was hereditary, but the heir to the throne (Crown Prince or Crown Princess) was required by law to marry a commoner (Roger I and Elizabeth I Amendment). 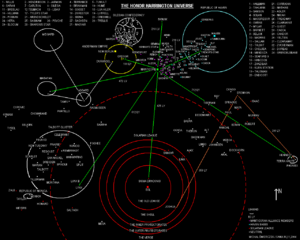 The Star Kingdom of Manticore held sovereignty to the Manticore Wormhole Junction termini. The only exception was Sigma Draconis Terminus, where Manticore shared sovereignty over the terminus with planetary state of Beowulf in the Sigma Draconis System. Joined areas connected with Manticore Wormhole Junction termini included, Gregor A, the Basilisk System, the Trevor Star System, the Lynx Terminus System, and the Lynx system. Other out of the Home System termini facilities at the Sigma Draconis and the Hennessy Systems and at Matapan Cluster include the Beowulf Terminus area, the Hennessy Terminus area, and the Matapan Terminus area.

In 1919 P.D. during Havenite operation "Thunderbolt" SKM lost every single system taken away from the People's Republic of Haven—with the exception of Trevor's Star—since the war started.

The Sidemore Republic, allied with SKM on the basis of bilateral defensive treaty of 1911 P.D., probably was a member of the Manticoran Alliance also.

Because of the policies of Baron High Ridge's government, Erewhon has left the Alliance and signed a mutual defence treaty with the Republic of Haven. With the end of the resumption of active warfare between the Alliance, Erewhon no longer participated in the war, as it was not obliged to join with RoH if it resumes hostilities. However, it made available a good portion of the technological advances achieved by the Alliance during the War.

It is revealed in Storm from the Shadows that following the ratification of the Talbott Cluster Annexation Constitution, the Star Kingdom is now officially known as the Star Empire of Manticore. This new political entity's territory includes the Manticore, Trevor's Star, and the Medusa systems, in addition to roughly one half of the former Silesian Confederacy which was split with the Andermani Empire, and Manticore. Accordingly, all governmental institutions transition to an Imperial status, and Elizabeth III of Manticore is crowned Empress Elizabeth I.

A system of federalism is put into place between Manticore and Talbott, with the Cluster electing a separate local Parliament and various planetary Governors in addition to having representation in the Parliament of Manticore. Exactly how Manticore will administer Silesia has yet to be revealed.

The Star Kingdom of Manticore was a force to be reckoned with in galactic politics, and considering the exponential increase in resources available to Manticore following the founding of the Empire, it can be presumed that the nation of Manticore as a whole will only become more powerful over time. Manticore currently possesses the most technologically advanced and battle hardened Naval fleet in space. While the Solarian League still operates the largest force known to man by far, the League is very far behind in ship and weapons technology, to the point where the vast majority of its ships would be completely worthless in a hypothetical battle. The League Navy has also not fought a major war in over 200 years. The Solarians themselves, as portrayed thus far, seem to be nearly completely ignorant of this disparity, believing that no "neo-barbarian" nation like Manticore could ever hope to challenge them.

Thus, as Manticore has changed, so have the challenges facing it. Despite the super massive confrontation with the Republic of Haven in the Battle of Manticore (HH11), relations with Haven following the revelation that renewed confrontations between itself and Manticore were in fact engineered by Mesa have prompted renewed interest in negotiation on both sides. The Solarian League and Mesa have become Manticore's (and Haven's) new nemesis, and a war the likes of which has never been seen before lies on the horizon.

Though originally settled as a single system star-nation, the Star Kingdom enjoyed several advantages most star-nations do not enjoy. Specifically, the Manticore system contained three habitable planets (Manticore, Sphinx, Gryphon). Most star-nations limited to a single star system had considerably less habitable real estate. This granted obvious advantages in terms of what the Star Kingdom was able accomplish even before orbital infrastructure and its impacts on system GNP and population capacity were considered.

Additionally, the Manticore system also contained the Manticore Wormhole Junction. Discovered approximately 100 years after the Star Kingdom was founded, it was the largest wormhole junction ever discovered. Initially, there were only five destinations reachable via the Junction, within the last 40 years before 1919 P.D. two more were located.

In large part due to tolls and usage fees charged to ships making transit via the Junction, the Star Kingdom enjoyed the largest single-system GNP outside the Solarian League itself. It was only this enormous economic advantage which had enabled Manticore to maintain its highly productive research and development programs, and to fuel the budget of the Royal Manticorian Navy. This same economic advantage also lent itself to diplomatic and foreign relations leverage, as threat of closure of the Junction to a star-nation's shipping would often resulted in that barred nation falling significantly behind its competitors for the bottom-line business of moving interstellar cargo. Finally, there were obvious military advantages in moving fleets strategically via the Junction as well as vulnerabilities from hostile forces using the Junction to move attacking forces into the Manticore system.

The third pillar of Manticoran economic power was a large merchant fleet, fourth in the known universe (only three Solarian League planets had larger merchant fleets).

The primary branch of the Star Kingdom's military was the Royal Manticoran Navy. The RMN was the senior service in terms of sheer budget and necessity; control of systems and planetary orbitals all but precludes other military action in many circumstances. With a five hundred year tradition of service, the RMN had amassed considerable institutional experience and knowledge, and had evolved from its beginnings as a system defense force, passed its lengthy formative years focusing primarily on commerce protection for the Manticoran merchant marine, and was regarded as one of the premier navies in the galaxy, due in part to the reinforcing experience from the naval academy at Saganami Island.

Backed by the significant resources Manticore commands, the RMN was further powered by strongly pursued and implemented research and development programs. Particularly since the start of the war with Haven, the RMN had seen its capabilities grow explosively compared to what had been the technological cutting edge prior to the onset of hostilities.

Other branches of the Manticoran military were the Royal Manticoran Marine Corps and the Royal Manticoran Army. These were professional ground forces which acted in concert with the RMN in actions to secure enemy worlds, space stations, and ships. The Marines were charged with maintaining security, providing reaction forces onboard RMN ships and with spearheading planetary assaults, whereas the Army was tasked with defending the surface of the Star Kingdom's worlds, reinforcing initial attacks by the Navy and Marines and providing garrison troops for occupied planets.

The RMMC's primary duty is to serve as ground troops, security elements and boarding parties for the Royal Manticoran Navy. Marine contingents are stationed on board every Royal Navy ship, the size of these contingents depending on the type of ship. When on board a Navy ship, Marines are in charge of the ship's security, protection of VIPs and conduct ground combat actions when ordered by the ship's captain. Common tasks for shipboard Marines include boarding actions against pirate vessels or suspicious merchantmen. During combat they fulfill some of the duties of naval ratings, primarily as weapon crews and damage control teams. Since the Marines conduct some of the tasks normally done by naval ratings the RMN is able to carry more Marines than other navies. In addition to shipboard duties, the Marines also act as the spearheading forces during a planetary assault, clearing the path for follow-up Army troops.

Political parties and its policies