Max Wolf
This article is about the German astronomer Max Wolf. For the Czech astronomer, see Marek Wolf.

Maximilian Franz Joseph Cornelius Wolf (June 21, 1863 – October 3, 1932) was a German astronomer and a pioneer in the field of astrophotography. He was Chairman of Astronomy at the University of Heidelberg and Director of the Landessternwarte Heidelberg-Königstuhl observatory from 1902 to 1932.

He was born in Heidelberg, Germany on June 21, 1863, the son of a popular medical doctor, Dr. Franz Wolf. His father encouraged an interest in science and built an observatory for his son in the garden of the family home. It is from here that Wolf is credited with his first astronomical discovery, comet 14P/Wolf, in 1884.[1]

Life at the university

He attended the town's world famous university and, in 1888, at the age of 25, he was awarded a Ph.D. by the University of Heidelberg. He spent one year of post-graduate study in Stockholm, the only significant time he would spend outside of Heidelberg in his life. He returned to the University of Heidelberg and accepted the position of privat-docent in 1890. A popular lecturer in astronomy, he declined offers of positions from other institutions. In 1902 he was appointed Chair of Astronomy and Director of the new Landessternwarte Heidelberg-Königstuhl observatory. Positions he would hold until his death in 1932.[2] 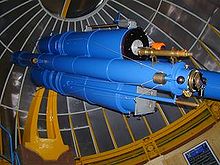 While the new observatory was being built Wolf was appointed to supervise the construction and outfitting of the astrophysics half of the observatory. He proved to be a not only a capable supervisor but also a successful money raiser. When sent to America to study the construction of the large new telescopes being built there he returned not only with telescope plans but also with a grant of $10,000 from the American philanthropist Catherine Wolfe Bruce. Wolf immediately designed and ordered a double refractor telescope from American astronomer and instrument builder, John Brashear. This instrument, known as the Bruce double-astrograph, with parallel 16 in (41 cm) lenses and a fast f/5 focal ratio, became the observatory's primary research telescope. He also raised money for a 28 in (71 cm) reflector telescope, the first for the observatory, used for spectroscopy.[3]

In 1910 Wolf proposed to the Carl Zeiss optics firm the creation of a new instrument, now known as the planetarium. World War I intervened before this could be developed, but the Carl Zeiss company resumed this project after peace was restored. The first official public showing was at the Deutsches Museum in Munich, Germany on October 21, 1923.[4]

During his trip to America he was interested in learning more about the relatively new field of astrophotography and so he met the famous American astronomer and astrophotographer E.E. Barnard. The two would become life long correspondents, competitors, collaborators and friends. Wolf was clearly moved by the death of his friend in 1923 and wrote a long obituary.[5]

The University, already world renowned in many other fields, became well known for astronomy, due primarily to Wolf's leadership. Wolf himself was an active researcher, contributing numerous papers in many areas of astronomy up to the end of his life, which must have been sudden and unexpected. Like his friend, E. E. Barnard, he died rather young for an astronomer. He died in Heidelberg on October 3, 1932, at the age of 69. He was survived by his widow and three sons.[1]

Wolf started his career as a comet hunter and continued to discover them throughout his life. He discovered or co-discovered several comets, including 14P/Wolf and 43P/Wolf-Harrington. He won a competition with E. E. Barnard on who would be the first to observe the return of Halley's Comet (P1/Halley) in April, 1910.[3]

One of the many significant contributions Wolf made was in the determination of the nature of dark nebulae. These areas of the sky, thought since William Herschel's time to be "holes in the sky", were a puzzle to astronomers. In these areas no stars could be seen, only featureless black. In collaboration with E. E. Barnard, he proved, by careful photographic analysis, that these dark nebulae were actually huge clouds of fine opaque dust.[3]

Along with E. E. Barnard, Wolf applied astrophotography to the observation of stars. The Bruce double-astrograph was originally designed to hunt dim asteroids but it was found to be ideally suited for the study of the proper motion of low luminosity stars using much the same technique. In 1919 Wolf published a catalog of the locations of over one thousand stars along with their measured proper motion. These stars are still commonly identified by his name and catalog number.[6] Among the stars he discovered is Wolf 359, a dim red dwarf that was later found to be one of the nearest stars to our solar system.[7] He continued to add proper motion star discoveries to this catalog throughout his life, with the catalog eventually totaling over 1500 stars, many more than all of his competitors combined.[8] These stars are significant because stars with low luminosity and high proper motion, such as Barnard's Star and Wolf 359, are usually relatively close to the Earth and thus the stars in Wolf's catalog remain popular subjects for astronomical research to this day. The methods used successfully by E. E. Barnard and Wolf were continued with success by Frank Elmore Ross and George Van Biesbroeck up through the mid 20th century. Since that time photographic plates have been gradually replaced with more sensitive electronic photodetectors for astronomical surveys.

The first asteroid discovered with the Bruce double-astrograph was 323 Brucia, in 1891. Wolf named it after the American philanthropist Catherine Wolfe Bruce, who had donated the $10,000 used for the construction of this telescope. He pioneered the use of astrophotographic techniques to automate the discovery of asteroids, as opposed to older visual methods, as a result of which asteroid discovery rates sharply increased. In time-exposure photographs, asteroids appear as short streaks due to their planetary motion with respect to fixed stars.since He discovered more than 200 asteroids in his lifetime.

Among his many discoveries was 588 Achilles (the first Trojan asteroid) in 1906, as well as two other Trojans: 659 Nestor and 884 Priamus. He also discovered 887 Alinda in 1918, which is now recognized as an Earth-crossing Amor asteroid (or sometimes classified as the namesake of its own Alinda family). Shortly after his last discovery (on February 6, 1932), his record 248 discoveries were beaten by his pupil Karl Wilhelm Reinmuth, on July 24, 1933.

The crater Wolf on the Moon is named after him, as is the asteroid 827 Wolfiana.