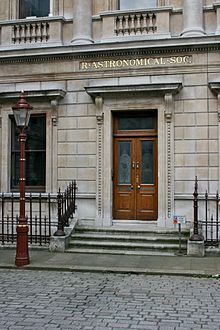 The entrance to the Royal Astronomical Society at Burlington House.

The Royal Astronomical Society (RAS) is a learned society that began as the Astronomical Society of London in 1820 to support astronomical research (mainly carried on at the time by 'gentleman astronomers' rather than professionals). It became the Royal Astronomical Society in 1831 on receiving its Royal Charter from William IV. A Supplemental Charter in 1915 opened up the fellowship to women. It is the UK adhering organisation to the International Astronomical Union and a member of the Science Council, and encourages and promotes the study of astronomy, solar-system science, geophysics and closely related branches of science.[1] Meetings are held in Burlington House, in Piccadilly, London and across the United Kingdom. They are also involved in the production of astronomical journals and periodicals. The Society has over 3000 members,[1] around a third of whom live outside the United Kingdom. In addition, those members of the public who have an interest in astronomy and geophysics and wish to support the work of the Society may become Friends of the RAS.

One of the major activities of the RAS is publishing refereed journals. It currently publishes two world-leading primary research journals, MNRAS in astronomy and (in association with the Deutsche Geophysikalische Gesellschaft) GeoJI in geophysics, and A&G, which publishes review and other articles of wide interest in a 'glossy' format. The full list of journals published (both currently and historically) by the RAS, with abbreviations as used for the NASA ADS bibliographic codes is:

Members of the RAS are styled fellows, and may use the postnominals FRAS. Fellowship is open to anyone over the age of 18 who is considered acceptable to the society. As a result of the society's foundation in a time before there were many professional astronomers, no formal qualifications are required. However, around three quarters of fellows are professional astronomers or geophysicists. The society acts as the professional body for astronomers and geophysicists in the UK and fellows may apply for the Science Council's Chartered Scientist status through the society. The fellowship passed 3,000 for the first time during 2003.

Friends of the Royal Astronomical Society

In 2009 a new initiative was launched for those with an interest in astronomy and geophysics but without professional qualifications or specialist knowledge in the subject. Such people may join the Friends of the RAS, which offers popular talks, visits and social events.

The Society regularly organises monthly discussion meetings on topics in astronomy and geophysics, which are usually held in London on the second Friday of every month from September through to June. (Reports of the meetings appear in The Observatory.) It also sponsors the RAS National Astronomy Meeting, a lengthier meeting of professional astronomers held each spring, and occasionally meetings in other parts of the UK.

The Royal Astronomical Society has a more comprehensive collection of books and journals in astronomy and geophysics than the libraries of most universities and research institutions. The library receives some 300 current periodicals in astronomy and geophysics and contains more than 10,000 books from popular level to conference proceedings. Its collection of astronomical rare books is second only to that of the Royal Observatory in Edinburgh in the UK. The RAS library is a major resource not just for the Society but also the wider community of astronomers, geophysicists, and historians.[2]

The society is also involved in promoting astronomy to members of the general public through their various outreach pages for students, teachers, the public and media researchers. The RAS has an advisory role in relation to United Kingdom public examinations, such as GCSEs and A Levels.

The RAS sponsors a number of topical groups, many of them in interdisciplinary areas where the group is jointly sponsored by another learned society or professional body:

The first person to hold the title of President of the Royal Astronomical Society was William Herschel, though he never chaired a meeting, and since then the post has been held by many distinguished astronomers. The post is currently offered for a period of two years.

The highest award of the Royal Astronomical Society is its Gold Medal. Among the recipients best known to the general public are Albert Einstein in 1926, and Stephen Hawking in 1985.

The Society occupies premises at Burlington House, London, where a substantial library and meeting rooms are available to fellows and, by arrangement, other interested parties. The Society represents the interests of astronomy and geophysics to UK national and regional, and European government and related bodies, and maintains a press office, through which it keeps the media and the public at large informed of relevant developments in these sciences. The society also allocates grants to worthy causes in astronomy and geophysics, and assists in the management of the Paneth Trust [3]