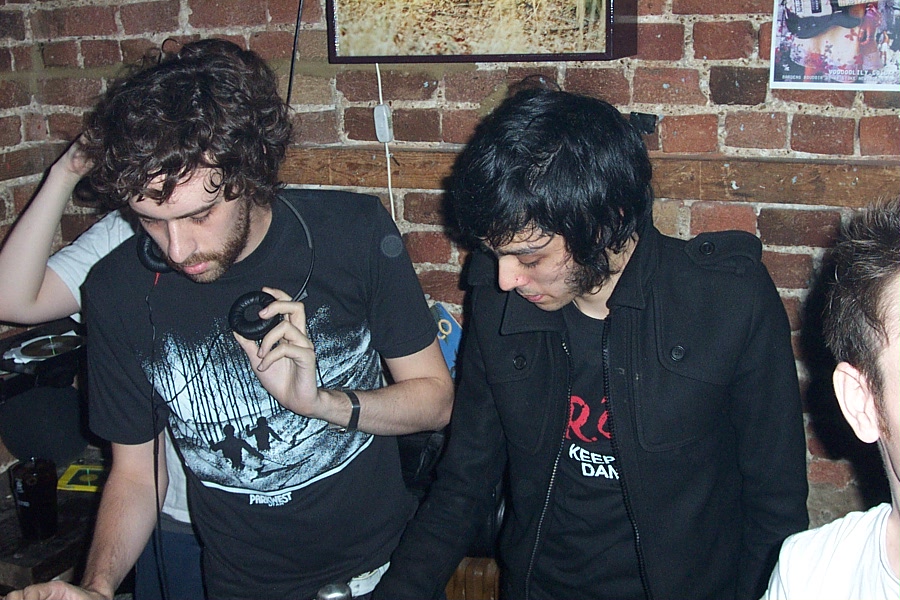 Justice first produced tracks together for Musclorvision's Hits Up To You, a concept compilation where tracks were meant to sound like they were meant for the Eurovision song contest.

After the original release of "Never Be Alone", Justice worked on remixes for a number of French groups (, Scenario Rock, Gambit) as well as for larger mainstream acts such as , , and . Justice's first solo single, "", was released on in September 2005 and was championed by DJs such as , , and . The track was re-released in 2006 with additional remixes. The duo's prolific remix work continued, as they turned in mixes for Franz Ferdinand, , and .Justice won the award for Best Video at the 2006, for Justice vs. Simian - "We Are Your Friends". Augé and de Rosnay were not present at the ceremony, and the award was accepted by label art director "So Me" and video director Jérémie Rozan. So Me was famously interrupted mid-speech by rapper , who went onto the stage arguing that he should have won the award instead. [cite web|url=http://www.mtv.co.uk/channel/mtvuk/news/02112006/emas_shocker_kanye_stage_invasion|title=EMAs Shocker: Kanye Stage Invasion! | MTV UK ]

Their debut album, titled "†", was released on Ed Banger Records on . The album was released in the United States on Downtown/Ed Banger. The album was preceded by the " EP", released on , which featured the tracks "Phantom" and their own remix of "D.A.N.C.E." titled "B.E.A.T". "D.A.N.C.E." was nominated for "Video of the Year at the . On the first of November Justice received the "Video Star" award at the European Music Awards in Munich and also picked up the best French act of the year. Justice was chosen to do a mix for the series in 2008, but Fabric rejected it. Xavier de Rosnay said that, " [t] hey weren't ready for something like this." Now titled "Justice Xmas Mix," the mix is available on the web. [ Pitchfork article http://www.pitchforkmedia.com/page/news/47956-update-rejected-justice-fabric-mix-turned-xmas-gift]

Justice appeared as a at the 2007 Coachella festival, the in Niigata, , the in , , the festival in , , the in , , the in , , in , at the "I LOVE TECHNO" festival in Ghent - .
in Belgium and the Lowlands festival in The Netherlands, also at Tennents Vital in the Radio One Tent and at the Phoenix Park Marquee in . Justice's performance at Coachella in 2007 was their first ever live music performance per se. The band's performances before Coachella had seen them DJ using either turntables or CD mixers. Justice was nominated for Best Dance Recording (for "") and Best Electronic/Dance Album (for "†") at the 50th s. [50th Annual Grammy Awards Nominations List http://www.grammy.com/GRAMMY_Awards/50th_Show/list.aspx]

The video clip for "Stress" was boycotted by several TV-stations, so the band dumped the video on YouTube where it was seen by 14,000 people within 24 hours after having been posted on . The music video features a group of youths committing acts of vandalism and wearing jackets bearing the Justice cross on the back. On their MySpace in late 2005 they describedthemselves as “electro-Christian-club” and used a as a logo. Xavier said, “Eighty percent of France is Christian. My Dad was a bit uncertain and thought it was bad taste, but I was like, This is what I want to do Dad. It’s odd because in America we have received support from Christian groups thanking us for spreading the word. We do not invert the cross and I suppose they think we look like nice guys so there has not been a problem.” In an interview for Dummy in 2005, Justice said that they wanted a strong concept for each record they put out and with this one they wanted to keep people guessing. [http://dummymag.blogspot.com/2008/01/from-dummy-magazine-archive-justice.html]

On , the Sun announced that Justice was chosen by of the to produce the band's follow up to , [cite web |url = http://www.nme.com/news/tabloid-hell/37771 |title =Justice to produce Red Hot Chili Peppers album – Tabloid Hell |accessdate = 2008-07-1 |publisher = NME.com ] but this was quickly corrected by manager as Anthony Kiedis had only stated he was a fan of Justice, not preparing for a collaboration. [cite web |url = http://www.mixmag.net/content/justice-not-producing-red-hot-chili-peppers-album |title =Justice not producing Red Hot Chili Peppers album |accessdate = 01/07/2008 |publisher = Mixmag.net ]

In July , Justice was revealed to have done a mix for the Summer 2009 Fashion Show, much like did for in 2007. [cite web |url=http://asianmandan.blogspot.com/2008/07/jusice-x-dior-homme.html |title=Asian Dan: Justice x Dior Homme: Spring-Summer 09 Mix |accessdate = 8/16/2008 |publisher = asianmandan.blogspot.com ] The track, now known as Planisphere, was released in four parts on the band's MySpace page, with an extra final cut that did not make it into the Fashion show mix (known as "Planisphere IV", or "Planisphere Final").

On August 25 2008, the band announced via Myspace that their next major release would be a DVD documentary/concert film titled "A Cross the Universe". The announcement was also tied in with an invitation for fans to email photos, images and artwork to an address so that the received photos could be compiled for use as the artwork for the release.

Their style has been thought of as having some heavy metal influence [ New York Times review [http://www.nytimes.com/2007/10/22/arts/music/22just.html] ] and combines cut up bass lines with a compressed and distorted synth sound. Their music often includes bass slapping which results in an style similar to the French label . Additionally, Justice uses samples of other songs to add to the effect, as with their song "Tthhee Ppaarrttyy", featuring .

Equipment used by Justice in their productions include an Ensemble Recording Interface, the , software, and SX.

*"A Cross the Universe"