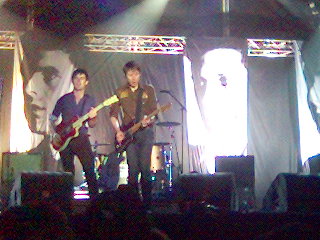 The members of Franz Ferdinand played in various bands during the 1990s including , , 10p Invaders and Embryo. Alex Kapranos and Paul Thomson played together in and subsequently teamed up to write songs. Around the same time, Kapranos taught his friend Bob Hardy how to play bass. Kapranos met co-guitarist Nick McCarthy, who had returned to Scotland after studying bass in Germany, in 2001.

The band moved to Gula Studios in , with Cardigans producer to record their debut album. In January 2004 the single "Take Me Out" (audio|Franz Ferdinand - Take Me Out.ogg|sample) reached #3 in the UK charts. The album, "Franz Ferdinand", was released in early 2004, debuting at #3 in the in February 2004 and at #12 in the Australian album charts in April 2004. The album only reached the lowest levels of the Billboard 200 album charts in the US as of early 2004, but reached the top 5 of the chart and the Heatseeker chart for debut artists. After a couple of North American tours and heavy rotation of the "Take Me Out" video on MTV, the album eventually reached #32 on the Billboard 200 later in 2004 and sold over a million copies in the United States. "Franz Ferdinand" received a generally strong positive response from critics. "" rated with 9 out of 10 and said that hed n ot been the band was the latest in the line of art school rock bands featuring , , , , , the , Wire, Travis and Blur.

On , the album was awarded the 2004 . "Take Me Out" gained first place in the Australian for 2004, winning more than twice the votes of the second-place entry. Franz Ferdinand proceeded to win an in 2004 and two in 2005. The avant-garde music video for "Take Me Out" earned them a Breakthrough Video MTV Award. The NME named Franz Ferdinand the best album of 2004 [ [http://www.nme.com/reviews/albums/oftheyear NME.COM - The world's fastest music news service, music videos, interviews, photos and free stuff to win ] ] , and also placed it 38th on their "100 Best Albums of All Time" list. [ [http://www.timepieces.nl/Top100's/2006NME.html 2006 NME 's 100 Best Albums Of All Time - All Time Top 100 Albums ] ] The band performed at the where they performed "Take Me Out" as a live medley with , , and . "Take Me Out" was also featured on the video game

"You Could Have It So Much Better"

The band spent much of 2005 in the studio in Scotland working on their follow-up album, "", which was released on 2005. The band initially intended to leave the album self-titled like their debut, [McLean, Craig. "Ferdinand: No Bull". "Spin". September 2005.] but they changed it to "You Could Have It So Much Better...With Franz Ferdinand" before settling on the final title. [Spitz, Marc. "Franz Ferdinand". "Spin". November 2005.] The album's cover design was modelled on Alexander Rodchenko's 1924 portrait of Lilya Brik. The band attempted to broaden its musical range on the album; Hardy said, "There's more to life than disco-beat guitar music". After the critical acclaim of their debut, some reviews towards the new album became more polarised, with some complaints that the recording was rushed.Fact|date=January 2008 However, it was generally well-received in the press and seen as an album equal to, or better than their first by most critics, including the NME.Fact|date=January 2008 It entered the UK Album Charts at Number 1 and the US charts at Number 8. On the tour that followed the album release, Franz broke the record for the longest run at the , , by playing 4 sold out nights during November-December 2005.Fact|date=January 2008 To support the album, four singles were released. Included in that set is a single that contained a video-clip only single as well (both the AA-side "L. Wells" and the video-clip "Jeremy Fraser" are not featured on the album, recorded in early 2006 during the band's tour of Australia in support of the album). Also included is another video-clip-only single called "Wine In the Afternoon" which is the B-side to , and was also not featured on the album, but recorded on tour in Michigan. "" made it to number 4, while "Walk Away" and "The Fallen" / "L. Wells" entered the top 15 of the . The 4th and final single from the second album, "" peaked at number 30.

Since late 2007, the band have been recording their third studio album in , and it is expected to be released in January 2009. [ [http://www.pitchforkmedia.com/article/news/51540-franz-lp-set-for-january-song-due-in-madden-09 Franz LP Set for January] ]

In an interview with British newspaper "The Independent" the band stated that the upcoming third Franz Ferdinand album would have plenty of African influences. This was revealed at a recent African Express show, an event set up by , of Blur and fame. This was revealed after the band played a new song, which is unofficially titled "Can't You Let Me Stay Tonight". When it was played at the event, the song featured Malian ngoni player Bassekou Kouyaté, Senegalese percussionists, and British rapper Kano. While this has not yet been confirmed if the stated musicians will appear in an official recorded version, [ [http://www.independent.co.uk/arts-entertainment/music/features/a-whole-new-world-for-franz-ferdinand-795342.html A whole new world for Franz Ferdinand - Features, Music - Independent.co.uk] ] the band have reportedly finished recording the album, and Alex Kapranos has subesequently also stated that "The last record was...like a teenager having sex. This one's a bit more assured and a bit friendlier for the dance floor." [cite web|url=http://www.idiomag.com/peek/42950/franz_ferdinand|title=Franz Ferdinand News - Franz Ferdinand on New Record: Friendlier for the Dance Floor|accessdate=2008-09-26|date=2008-09-24|publisher=]

On October 7th, 2008, reporter Michael Hogan from "Vanity Fair" interviewed Alex and Paul, who confirmed the title of their third album to be, simply, "Tonight". [http://www.vanityfair.com/online/politics/2008/10/an-obama-fundraiser-my-big-franz-ferdinand-scoop.html] The band also confirmed the "Tonight" title at a 'secret' Brooklyn show on October 8th, 2008. Six new songs were played during Franz Ferdinand's Music Hall of Williamsburg set, including "Ride Together", "Turn It On", "Send Him Away", "Katherine Kiss Me", "Ulysses", and "What She Came For". [http://www.self-titledmag.com/home/2008/10/09/the-st-scoop-franz-ferdinand-reveal-new-record-title-songs-at-secret-brooklyn-show/]

Franz Ferdinand covered the song "" which appeared as a B-side on the single, and is also working on an album of Sparks covers, collaborating with the group on the recordings. [citeweb|url=http://www.contactmusic.com/new/xmlfeed.nsf/mndwebpages/franz%20plan%20heroic%20sparks%20album_04_04_2006|title=Franz Plan Heroic Sparks Album] They have also covered "Sexy Boy" by Air and "It Won't Be Long" by , Pulp's popular single "", 's top 5 hit "" and 's song "Sound and Vision", featuring

As far as collaborations go, Kapranos has announced that on the 22/04/08 he will begin collaborating with an unknown Canadian artist, as well as implying that the band was working with on the new album, as Alex is a fan of their work with . The band also performed, played, and recorded with , covering the song "Sorry Angel" for the 2005 album . In addition, Franz re-recorded the track "Brown Onions" for David Shringley's compilation album "Worried Noodles". [ [http://www.davidshrigley.com/worriednoodles/newcd.htm New Cd From David Shrigley, Worried Noodles, 2007 ] ] The band kept instrumentation identical but used lyrics written by Shringley which include the consistent repetition of the word "No" and occasionally "No brains, no teeth, no legs, no eyes...". a band who, it is reported are a favourite of Franz Ferdinand also performed their own version of "No" on the same album.

The name of the band was originally inspired by a called The Archduke. After seeing the horse run on television the band began to discuss Archduke Franz Ferdinand and thought it would be a good band name because of the sound of the name and the implications of the Archduke's death (his assassination was a significant factor in the lead up to ). They discussed it in a very early interview with the Scottish magazine "Is This Music?" [ [http://www.franzferdinand.org/press/f_isthismusic_000603.htm "Is This Music?" (link dead)] , June 2003, SHOOTING STARS: FRANZ FERDINAND MARRY HISTORY AND ART, John Clarke.]

"Mainly we just liked the way it sounded," says Bob. "We liked the ." "He was an incredible figure as well," continues Alex. "His life, or at least the ending of it, was the catalyst for the complete transformation of the world ... he was a pivot for history. But I don't want to over-intellectualise the name thing. Basically a name should just sound good ... like music." Paul has a much grander notion. "I like the idea that, if we become popular, maybe the words Franz Ferdinand will make people think of the band instead of the historical figure."

The song "Take Me Out", on the band's first album, was the second single to be released by the band. The single release of "Take Me Out" came with the B-side, "All for You Sophia", based on the assassination of Archduke Ferdinand and his wife, whose name was Sophie, not Sophia. The band changed the name Sophie to Sophia to give the song a better ring to it.

The band is notable for its use of imagery in album and single covers. Examples include: "", which references a 1924 portrait of by ; "Take Me Out", which references "One-Sixth Part of the World," also by Alexander Rodchenko; "This Fire" which references "Beat the Whites with the Red Wedge" by ; and "Michael", with single art based on "A Proun" by Lissitzky. The song "Love and Destroy" was inspired by the scene of disorder made by Margarita, a character of Michael Bulgakov's "Master and Margarita", in the apartment of the literature critic Latunzky.

Also, in "Outsiders", the lyrics "In seventeen years will you still be Camille, , Gala or whatever" are a reference to the lovers of the artists , and .

Many of the videos to promote the band's singles take inspiration from n much like their LP & CD sleeves.

The avant-garde music video for "Take Me Out", directed by , was inspired by ism, choreographies and Russian constructivist design.

The lyrics of "Do You Want To" make reference to parties at the 'trendy' Glasgow art gallery Transmission and the video includes a variety of the work of contemporary artist , along with a reference to Pink Floyd in the mix. In each one of the music videos of Franz Ferdinands, the music sounds slightly different to the regular song.

"An A-Z of Franz Ferdinand" by Helen Chase

In September 2005, Alex Kapranos began writing about what he ate while touring the world with the rock band Franz Ferdinand. The writing is as much about where he eats and the people he eats with as the unusual flavours he tastes on the road. Whether it's munching donuts with cops in Brooklyn, swallowing bull's balls with the band in Buenos Aires or queuing for a saveloy in South Shields, these are surprising and vivid snapshots of life on the road. Funny, poignant, sickening or sexual depending on the situation, the material, both new and previously published in the Guardian, is fascinating and entertaining.