The logo of the National Audit Office.

The National Audit Office (NAO) is an independent Parliamentary body in the United Kingdom which is responsible for auditing central government departments, government agencies and non-departmental public bodies. The NAO also carries out Value for Money (VFM) audit into the administration of public policy.

The NAO is the auditor of bodies funded directly by the Parliament of the United Kingdom.

The NAO has three main streams of work:

Financial audit The NAO’s financial audits give assurance over three aspects of government expenditure: the truth and fairness of financial statements; the regularity (or statutory validity) of the expenditure, and; the propriety of the audited body’s conduct in accordance with parliamentary, statutory and public expectations. Financial audits are carried out in much the same way as private auditing bodies and the NAO voluntarily applies the International Standards of Auditing (ISAs).

Value for Money (VFM) audits are non-financial audits to measure the effectiveness, economy and efficiency of government spending. Roughly sixty of these reports are produced each year, the most notable from recent years being the reports on MRSA, which led to an increase in public interest in the topic, the report on the rescue of British Energy and the report in the Public Private Partnership to maintain the London Underground. The remits of the NAO and the Public Accounts Committee do not allow them to question the policy itself and so VFM reports only examine the implementation of policy. The responsibility for questioning policy is left for other select committees and debating chambers of Parliament, but this has not prevented the PAC being named committee of the year in 2006.

Good Governance is a smaller but increasing area of work for the office and is somewhere in between VFM and financial audit work. The work tends to produce shorter, quicker reports than VFM and includes briefing documents and papers for select committees. The work also includes Section 2 Reports which examine the collection of taxes by HM Revenue and Customs and the DVLA.

The NAO and Public Accounts Committee (PAC) form the key links of the Public Audit Circle which has the following sequence:

The Public Accounts Commission (TPAC) annually approves the NAO's corporate plans and budgets. It also receives value for money reports on the operation of the NAO. These are written by private sector audit firms in much the same manner as the NAO reports on Central Government.

The NAO developed from the former Exchequer and Audit Department (founded in 1866) in 1983 as the auditor for central government (including most of the externalised agencies and public bodies) as part of an "appropriate mechanism" to check and reinforce departmental balance and matching of quantitative allocation with qualitative purpose (as set out by public policy). The existence and work of the NAO are underpinned by three fundamental principles of public audit:[1] 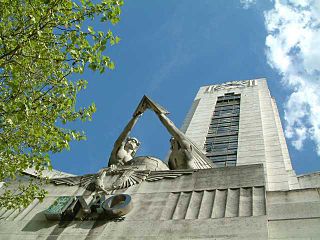 The National Audit Office building, built originally as the Imperial Airways Empire Terminal. The statue, "Speed Wings over the World" is by Eric Broadbent"

The basic need for the NAO arises from these three fundamental principles, in that, as Parliament votes on public expenditure of various activities by public bodies, they need auditors that are independent of the body in question, the government and/or opposing political parties; while auditing for compliance and legal spending by departments on the activities voted for by Parliament, in a transparent and public forum.

The campaign for New Public Financial Management (NPM) has been the driving force behind the technological and functional development and change in the scale and scope of the NAO’s work. Determined to emulate the managerial efficiencies of the private sector, which is driven by profit-maximisation goals, NPM provided public sector audit with the moving goal that is VFM-maximisation: which is achieved by maximising economy, efficiency and effectiveness (3Es).

VFM/performance audits have widened the scope of audit work beyond financial concerns and provided the “customer-based” approach that was lacking in the public sector. The research methodology referred to in the appendices of most VFM studies (carried out by the NAO) reflects on the use of a wide-range of market-research techniques such as focus groups, customer-interviews, expert panels, commissioned research, longitudinal studies. The NAO uses these to measure and verify the results and effectiveness of service provision, and to better understand customers and competitors, in order to evaluate performance and to provide relevant and constructive recommendations.

Having predominantly taken what Pollit & Suma (1997) call the “managerial” approach to self accountability, the NAO has tended to put an emphasis on the benefits it provides as justification for its existence.[2] And this is possibly explained by two things, the first and more positive view, is that the NAO is applying similar VFM criteria to itself as an example and form of assessment; the second view is that the NAO being financed by public funds is also under a pressure to exhibit a need for its existence and the derived usefulness.

The NAO works under pressure to meet statutory and public expectations, playing multiple roles: as auditor, evaluator and guide.

The NAO is based in London and Newcastle and has a staff of 900.

Part of the NAO's London Office is listed building, originally built for Imperial Airways as their "Empire Terminal". The building has recently undergone a £60m restoration and refurbishment.

Following the controversy over a previous C&AG’s expenses, see the critisims, the governance arrangements of the NAO were overhauled and Board was put in place to oversee the running of the organisation. The Board is made up of

Some of the criticisms that have been levelled at the NAO include the following:

There are several other public sector auditing bodies in the United Kingdom: