Hannah Dakota Fanning[1] (born February 23, 1994), better known as Dakota Fanning, is an American actress. Fanning's breakthrough performance was in I Am Sam in 2001. As a child actress, she appeared in high-profile films such as Man on Fire, War of the Worlds, and Charlotte's Web. Fanning began the transition to more adult roles with Hounddog and The Secret Life of Bees. Recent films have included The Twilight Saga, the fantasy/horror animated children's movie Coraline and The Runaways. She has won numerous awards and is the youngest nominee for a Screen Actors Guild Award.

Fanning was born in Conyers, Georgia, the daughter of Joy Fanning (née Arrington), who played tennis professionally, and Steve J. Fanning, who played minor league baseball and now works as an electronics salesman in Los Angeles.[2][3] Her maternal grandfather was former American football player, Rick Arrington, and her aunt is former ESPN reporter Jill Arrington.[4] Dakota is the elder sister of Elle Fanning, also an actress.

Fanning has German and Irish ancestry.[5] She and her family are Southern Baptist.[6] In June 2011, she graduated from Campbell Hall School in North Hollywood, California,[7] where she participated on the varsity spirit cheerleading squad and was voted homecoming queen.[8][9] As of September 2011, she attends New York University.[10]

Fanning began acting at the age of five after appearing on a Tide commercial. Her first significant acting job was a guest role in the NBC prime-time drama ER, which remains one of her favorite roles ("I played a car accident victim who has leukemia. I got to wear a neck brace and nose tubes for the two days I worked.").[11]

Fanning subsequently had several guest roles on established television series, including CSI: Crime Scene Investigation, The Practice, and Spin City. She also portrayed the title characters of Ally McBeal and The Ellen Show as young girls. In 2001, Fanning was chosen to star opposite Sean Penn in the movie I Am Sam, the story of a mentally challenged man who fights for the custody of his daughter (played by Fanning).

Her role in the film made Fanning the youngest person ever to be nominated for a Screen Actors Guild Award, being seven years of age at the time.[12] She also won the Best Young Actor/Actress award from the Broadcast Film Critics Association for her performance.[13]

In 2002, director Steven Spielberg cast Fanning in the lead child role of Allison "Allie" Clarke/Keys in the science fiction miniseries Taken. By this time, she had received positive notices by several film critics, including Tom Shales of The Washington Post, who wrote that Fanning "has the perfect sort of otherworldly look about her, an enchanting young actress called upon ... to carry a great weight."[14]

In the same year, Fanning appeared in three films: as a kidnap victim who proves to be more than her abductors bargained for in Trapped, as the young version of Reese Witherspoon's character in Sweet Home Alabama, and as Katie in the movie Hansel and Gretel.

Fanning was featured even more prominently in two films released in 2003: playing the uptight child to an immature nanny played by Brittany Murphy in Uptown Girls and as Sally in The Cat in the Hat.

Fanning did voice-over work for four animated projects during this period, including voicing Satsuki in Disney's English language release of My Neighbor Totoro, a little girl in the Fox series Family Guy, and a young Wonder Woman in an episode of Cartoon Network's Justice League. 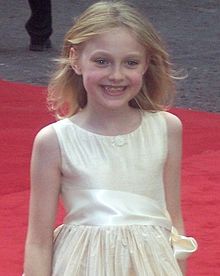 Fanning at the London premiere of War of the Worlds, June 2005

In 2004, Fanning appeared in Man on Fire as Pita, a nine-year-old who wins over the heart of a retired mercenary (Denzel Washington) hired to protect her from kidnappers. Roger Ebert wrote that Fanning "is a pro at only 10 years old, and creates a heart-winning character."[15] She was also the voice of Satsuki Kusakabe in the Disney re-dub of the 1988 Hayao Miyazaki animated film, My Neighbor Totoro.

Hide and Seek was her first release in 2005, opposite Robert De Niro. The film was generally panned, and critic Chuck Wilson called it "a fascinating meeting of equals – if the child star [Fanning] challenged the master [De Niro] to a game of stare-down, the legend might very well blink first."[16] Fanning voiced Lilo (succeeding Daveigh Chase) in the direct-to-video film Lilo & Stitch 2: Stitch Has a Glitch. She also had a small part in the Rodrigo García film Nine Lives (released in October 2005), in which she shared an unbroken nine-minute scene with actress Glenn Close, who had her own praise for Fanning: "She's definitely an old soul. She's one of those gifted people that come along every now and then."[17] Fanning also recorded voice work for Coraline during this time.[18]

Fanning completed filming on Dreamer: Inspired by a True Story (opposite Kurt Russell) in late October 2004. Russell declared he was astonished by his co-star's performance in the film. Russell, 54, who plays her father in the movie, says, "I guarantee you, (Dakota) is the best actress I will work with in my entire career."[19] Kris Kristofferson, who plays her character's grandfather in the movie, said that she's like Bette Davis reincarnated.[20]

While promoting her role in Dreamer, Fanning became a registered member of Girl Scouts of the USA at a special ceremony, which was followed by a screening of the film for members of the Girl Scouts of the San Fernando Valley Council.[21] She is not a member of a troop, but rather registered as a "Juliette", GSUSA's title for independently registered girls.[citation needed]

She then went directly to the set of War of the Worlds, starring alongside Tom Cruise. Released in reverse order (War in June 2005 and Dreamer in the following October), both films were critical successes. War director Steven Spielberg praised "how quickly she understands the situation in a sequence, how quickly she sizes it up, measures it up and how she would really react in a real situation."[22]

After filming was completed on War of the Worlds, Fanning moved straight to another film without a break: Charlotte's Web, which she finished filming in May 2005 in Australia. Producer Jordan Kerner said, "...when she was so caught up in War of the Worlds, we had to end up going on a search for other young actresses. They would have been nothing compared to her."[23]

Over the summer of 2006, Fanning worked on the film Hounddog, described in press reports as a "dark story of abuse, violence and Elvis Presley adulation in the rural South."[24] Fanning's parents have been criticized for allowing her to film a scene in which her character is raped. However, in response, Fanning said that "It's not really happening," to Reuters. "It's a movie, and it's called acting."[25]

In 2006, at the age of twelve, she was invited to join the Academy of Motion Picture Arts and Sciences, becoming the youngest member in the Academy's history.[26] Her income for 2006 was $4 million, earning her the fourth place in Forbes Magazine's list of top-earning stars aged under 21.[27]

In March and April 2007, she filmed Fragments – Winged Creatures alongside Kate Beckinsale, Guy Pearce, Josh Hutcherson, and Academy Award winners Forest Whitaker and Jennifer Hudson. She plays Anne Hagen, a girl who witnesses her father's murder and who turns to religion in the aftermath.

In July 2007, Fanning filmed for three days a short film titled Cutlass, one of Glamour's "Reel Moments" based on readers' personal essays. Cutlass was directed by Kate Hudson.

From September to December 2007, Fanning filmed Push, which centers on a group of young American expatriates with telekinetic and clairvoyant abilities who hide from a U.S. government agency in Hong Kong and band together to try to escape the control of the division.[28] Fanning played Cassie Holmes, a 13-year-old psychic.

In January 2008, Fanning began filming the movie adaptation of The Secret Life of Bees, a novel by Sue Monk Kidd.[29] Set in South Carolina in 1964, the story centers on Lily Owens (Fanning), who escapes her lonely life and troubled relationship with her father by running away with her caregiver and only friend (played by Jennifer Hudson) to a South Carolina town where they are taken in by an eccentric trio of beekeeping sisters (played by Queen Latifah, Sophie Okonedo, and Alicia Keys). Her movies Coraline and Push were released on the same day, February 6, 2009.

Fanning played Jane, a member of the Volturi Guard, in New Moon and reprised the role in Eclipse, based on novels by Stephenie Meyer.[30] New Moon was released on November 20, 2009, and Eclipse was released on June 30, 2010.

In 2010, she starred in the movie The Runaways, alongside Kristen Stewart, Stella Maeve, and Scout Taylor-Compton, where she played Cherie Currie, the lead singer of the band. In late 2010/early 2011, Fanning filmed Breaking Dawn, reprising the role of Jane.[31]

Dakota was originally set to star as Mia, the lead role in the film adaption of If I Stay based on the novel, but later withdrew from the project. In December 2010, it was announced that Fanning would not be filming any lead roles until after she finishes high school in 2011.[32]

Fanning's voice was heard in Rise, a documentary film commissioned by U. S. Figure Skating to mark the fiftieth anniversary of the crash of Sabena Flight 548 which resulted in the loss of the entire American team and subsequent cancellation of the 1961 World Figure Skating Championships. She read a poem written by national champion Laurence Owen (who died in the crash) that was said to be an eerie premonition of the afterlife.

Dakota Fanning will play Princess Margaret in the upcoming film Girls' Night Out.[33] She will play Annie James in "The Motel Life" in February. She has also signed onto "Mississippi Wild", which will begin production in Atlanta on March 21, 2011 and will be released into theaters in 2012. She will play Tessa in Now Is Good. Dakota Fanning became the face of Marc Jacobs’ Oh, Lola! perfume campaign, but the ad was banned in the U.K. for being too racy.[34]