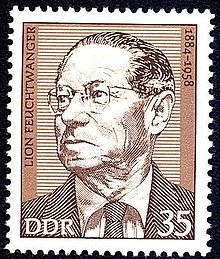 Stamp in memory of Lion Feuchtwanger

Lion Feuchtwanger (7 July 1884 – 21 December 1958) was a German-Jewish novelist and playwright. A prominent figure in the literary world of Weimar Germany, he influenced contemporaries including playwright Bertolt Brecht.

Feuchtwanger's fierce criticism of the Nazi Party—years before it assumed power—ensured that he would be a target of government-sponsored persecution after Adolf Hitler's appointment as chancellor of Germany in January 1933. Following a brief period of internment in France, and a harrowing escape from Continental Europe, he sought asylum in the United States, where he died in 1958.

Feuchtwanger's ancestors originated from the Middle Franconian city of Feuchtwangen which, following a pogrom in 1555, expelled all its resident Jews. Some of the expellees subsequently settled in Fürth where they were called the Feuchtwangers, meaning those from Feuchtwangen.[2] Feuchtwanger's grandfather Elkan moved to Munich in the middle of 19th century.[3] Lion Feuchtwanger was born in 1884 to Orthodox Jewish margarine manufacturer Sigmund Feuchtwanger and his wife Johanna nee Bodenheim. He was the oldest in a family of nine siblings of which two, Martin and Ludwig became authors; Ludwig's son is the London-based historian Edgar Feuchtwanger.

Lion studied literature and philosophy in the universities in Munich and Berlin. He made his first attempt at writing while still a student, earning a literary award. In 1903 he joined the school leaving exam at the grammar school Wilhelm Munich. He then studied history , philosophy and German philology in Munich and Berlin. He received his PhD in 1907 in Francis Muncker on [[[Heinrich Heine]]'s The Rabbi of Bacharach.

After studying a variety of subjects, he became a theatre critic and founded the culture magazine, "Der Spiegel", in 1908.[4] The first issue on 30 April appeared. After 15 issues and six months, they merged with Siegfried Jacobsohn 's journal The stage for which Feuchtwanger continued to write. In 1912 he married a Jewish merchant's daughter Marta Loeffler . She was pregnant at the wedding, but the child died shortly after birth. At the outbreak of the First World War in 1914 Feuchtwanger served in the German military service, but was released early for health reasons. Feuchtwanger's experience as a soldier in the German Army during World War I contributed to a leftist tilt in his writings.

In 1916, he published a play based on the story of Joseph Süß Oppenheimer which premiered in 1917 but Feuchtwanter withdrew it a couple years later as he was dissatisfied with it.

During the November Revolution of 1918/1919, Feuchtwanger was ill and unable to participate.

Feuchtwanger soon became a figure in the literary world, and was sought out by the young Bertolt Brecht, with whom he collaborated on drafts of Brecht's early work, The Life of Edward II of England, in 1923-24.[5] According to Feuchtwanger's widow, Marta, Feuchtwanger was a possible source for the titles of two other Brecht works, including Drums in the Night (first called Spartakus by Brecht).[6]

Shift from drama to novels

After some success as a playwright, Feuchtwanger shifted his emphasis to the historical novel . His most successful work in this genre was Jud Süß (written 1921-22, published 1925), which was well-received internationally. His second great success was The Ugly Duchess Margarete Maultasch . For professional reasons, he moved to Berlin in 1925, and then to a large villa in Grunewald in 1932. In that same year, he published the first part of the trilogy Josephus The Jewish War .

Opposition to the Nazis

Feuchtwanger was one of the very first to recognize and warn against the dangers of Hitler and the Nazi Party. As early as 1920 published in the satirical text Conversations with the Wandering Jew, a vision of what would later become the reality of anti-Semitic racist mania:

Towers of Hebrew books were burned, and bonfires were erected high up in the clouds, and people burnt, innumerable priests and voices sang: Gloria in excelsis Deo. Traits of men, women, children dragged themselves across the square from all sides, they were naked or in rags, and they had nothing with them as corpses and the tatters of book rolls of torn, disgraced, soiled with feces Books roles. And they followed men and women in kaftans and dresses the children in our day, countless, endless.

Feuchtwanger was already well-known throughout Germany in 1925, when his first popular novel, Jud Süß ( Jew Suss), appeared. The story of Joseph Süß Oppenheimer had been the subject of a number of literary and dramatic treatments over the course of the past century; the earliest of these having been Wilhelm Hauff's 1827 novella. The most successful literary adaptation was Feuchtwanger's 1925 novel titled Jud Süß based on a play that he had written in 1916 but subsequently withdrew. Feuchtwanger did not intend his portrayal of Süß as an antisemitic slur but as a study of the tragedy caused by the human weaknesses of greed, pride and ambition.

The novel was rejected by the major publishing houses and was only reluctantly taken on by a small publishing house. However, the novel was so well-received that it went through five printings of 39,000 copies within a year as well as being translated into 17 languages by 1931. The novel's success established Feuchtwanger as a major German author as well as giving him a royalty stream that afforded him a measure of financial independence for the rest of his life.[7]

Persecution by the Nazis

He also published Erfolg (Success), a fictionalized account of the rise and fall of the Nazi Party (which he considered, in 1930, a thing of the past) during the inflation era. The new fascist regime soon began persecuting him, and while he was on a speaking tour of America, in Washington, D.C., he was a guest of honor at a dinner hosted by then German ambassador Friedrich Wilhelm von Prittwitz und Gaffron. That same day (January 30, 1933) Hitler was appointed Chancellor. The next day, Prittwitz resigned from the diplomatic corps and called Feuchtwanger, recommending that he not return home.

In 1933, while Feuchtwanger was on the tour, his house was ransacked by government agents who stole or destroyed many items from his extensive library, including invaluable manuscripts of some of his projected works (one of the characters in The Oppermanns undergoes an identical experience). His books were burned in 1933 . In the summer of 1933, his name appeared on the first of Hitler's Germany Ausbürgerungsliste. During this time, he published the novel The Oppermann brothers.

Feuchtwanger and his wife did not return to Germany, moving instead to Southern France, settling in Sanary-sur-Mer. His works were included among those burned during the May 10, 1933 Nazi book burning held across Germany. On August 25, 1933, the official government gazette, Reichsanzeiger, included Feuchtwanger's name on the first list of those whose German citizenship was revoked because of "disloyalty to the German Reich and the German people." Because Feuchtwanger had addressed and predicted many of their crimes even before they came to power, Hitler considered him a personal enemy and the Nazis designated Feuchtwanger as the "Enemy of the state number one", as mentioned in The Devil in France (Der Teufel in Frankreich).

In his writings, Feuchtwanger exposed Nazi racist policies years before the official London and Paris governments abandoned their policy of appeasement towards Hitler. He remembered that American politicians also had suggested that "Hitler be given a chance." With the publication of The Oppermanns in 1933, he became a prominent spokesman in opposition to the Third Reich. Within a year, the novel was translated into Czech, Danish, English, Finnish, Hebrew, Hungarian, Norwegian, Polish and Swedish languages.

In 1936, still in Sanary, he wrote The Pretender (Der falsche Nero), in which he compared the Roman upstart Terentius Maximus, who had claimed to be Nero, with Hitler.

The following year he traveled to the Soviet Union. His notes about life in Moscow, Moskau 1937, show him praising life under Joseph Stalin and approving of the Moscow Trials. The book has been criticized as a work of naive apologism.[8]

After leaving Germany in 1933, Feuchtwanger lived in Sanary-sur-Mer , a center of German-speaking exiles in southern France. Due to the high circulation of his books, especially in the Anglo-Saxon world, he led a relatively comfortable life in exile. As a result of the little anti-Nazi attitude of Western powers, he approached the continued Soviet communism on. He traveled from November 1936 to February 1937 in the Stalinist Soviet Union , where his works with Artemi Chalatows were laid. In his travel impressions of Moscow in 1937 , he justified the show trials against alleged Trotskyites, attracting outrage from Arnold Zweig, Franz Werfel and Frank Bruno. His friendly attitude toward Stalin later delayed his naturalization in the United States. In exile he expects from the satirical German intellectuals who remained in the German Reich. When France declared war on Germany in 1939, Feuchtwanger was interned for a few weeks at Les Milles (Camp des Milles). When the Germans invaded France in 1940, Feuchtwanger was captured and imprisoned again at Les Milles.[9] Later, the prisoners of Les Milles were moved to a makeshift tent camp near Nîmes due to the advance of German troops. From there he was smuggled to Marseilles - disguised as a woman. After months of waiting in Marseilles , he was able to flee with his wife to the United States via Spain and Portugal. He escaped with the help of his wife Marta; Varian Fry, an American journalist who helped refugees escape from occupied France; Hiram Bingham IV, US Vice Consul in Marseilles; and, the Rev. Waitstill and Mrs. Martha Sharp, a Unitarian minister and his wife who were in Europe on a similar mission as Fry. The Rev. Sharp volunteered to accompany Feuchtwanger by rail from Marseilles across Spain to Lisbon. If Feuchtwanger had been recognized at border crossings in France or Spain, he would have been detained and turned over to the Gestapo. Realizing that even in Portugal, Feuchtwanger was still not out of reach of the Nazis, Martha Sharp gave up her own berth on the Excalibur, so Feuchtwanger could sail immediately for New York City with her husband.

Asylum in the United States

Feuchtwanger was granted political asylum in the United States, settled in Los Angeles in 1941. That same year, he published a memoir of his internment, The Devil in France (Der Teufel in Frankreich). In 1943, Feuchtwanger bought Villa Aurora in Pacific Palisades, California, and continued to write there until his death in 1958. In 1944, he co-founded the publishing house Aurora-Verlag in New York.

During the McCarthy era, he became the target of suspicion as a left-wing intellectual. In 1947 he wrote a play about the Salem Witch Trials, Delusion, or The Devil in Boston, which premiered in Germany in 1949 and 1953, translated by June Barrows Mussey (The Devil in Boston) in Los Angeles and was performed in New York City. At the end of life, he dealt with Jewish themes again ( The Jewess of Toledo ) and advocated a Jewish state as a refuge.

In 1953, Lion Feuchtwanger, the National Prize of East Germany first Class for art and literature. There he was as ardent anti-fascist and communist sympathizer held in high honor, even if the Jewish moments of his work was less appreciated.

Lion Feuchtwanger became ill with stomach cancer in 1957. [5] After several operations, he died from internal bleeding in late 1958. His wife, Marta, continued to live in their house on the coast, and remained an important figure in the exile community, devoting the remainder of her life to promoting the work of her husband. Before her death in 1987, Marta Feuchtwanger donated her husband's papers, photos and personal library to the Feuchtwanger Memorial Library, housed within the Special Collections of the Doheny Memorial Library at the University of Southern California. 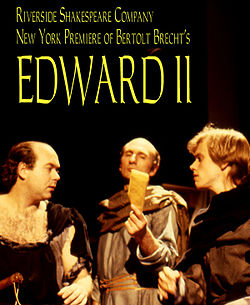