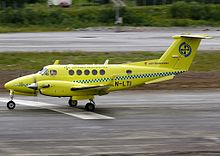 Air ambulance services in Norway have been operated by private companies and the military since the 1920s, but the first dedicated service came in 1972 when the Air Force 330 squadron was equipped with Westland Sea King helicopters. The helicopters were purchased by the ministry of justice while they were to be operated by the Air Force.

Helicopters are stationed at the hospitals in Arendal, Bergen, Brønnøysund, Dombås, Førde, Lørenskog, Stavanger, Tromsø, Trondheim, Ål and Ålesund. The helicopters must be airborne within 15 minutes. 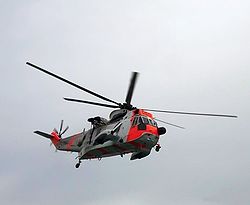 A Westland Sea King helicopter operated by the 330 Squadron

The squadron operates 12 Sea King helicopters and had 1 038 operations in 2005. At any given time the 330 squadron has six helicopters on 15 minutes readiness, one at each station. The helicopters are under command of the Joint Rescue Coordination Centre of Southern Norway located at Sola which is responsible for Southern Norway (Rygge, Sola, Florø and Ørland) and the Joint Rescue Coordination Centre of Northern Norway located at Bodø which is responsible for Northern Norway (Bodø and Banak). The primary function is search and rescue (SAR) but several hundred air ambulance missions are undertaken each year.