Seventeen Point Agreement for the Peaceful Liberation of Tibet

Seventeen Point Agreement for the Peaceful Liberation of Tibet

The Agreement of the Central People's Government and the Local Government of Tibet on Measures for the Peaceful Liberation of Tibet, or the Seventeen Point Agreement for the Peaceful Liberation of Tibet for short, is the document by which the ersatz[clarification needed] delegates of the 14th Dalai Lama allegedly reached an agreement with the government of the newly-established People's Republic of China on affirming Chinese sovereignty over Tibet. It was signed by Ngapoi Ngawang Jigme, who advocated Tibetan acquiescence to China, and sealed in Beijing on 23 May 1951 and confirmed by the government in Tibet a few months later.[1] In addition, the following letter purportedly written by the Dalai Lama indicating his acceptance was also sent to Beijing in the form of a telegram on the 24th of October. Some say that the delegates were coerced to sign the agreement, others insist that it actually never happened:

"The Tibet Local Government as well as the ecclesiastic and secular people unanimously support this agreement, and under the leadership of Chairman Mao and the Central People's Government, will actively support the People's Liberation Army in Tibet to consolidate national defence, drive out imperialist influences from Tibet and safeguard the unification of the territory and the sovereignty of the Motherland." [2]

According to the Tibetan government-in-exile, some members of the Tibetan Cabinet (Kashag), for example, Tibetan Prime Minister Lukhangwa, never accepted the agreement.[3] But the National Assembly of Tibet, "while recognizing the extenuating circumstances under which the delegates had to sign the 'agreement', asked the government to accept the 'agreement'...the Kashag told Zhang Jingwu that it would radio its acceptance of the 'agreement'."[4]

Chinese sources regard the document as a legal contract that was mutually welcomed by both governments and by the Tibetan people. Tibetan exile sources and international governments generally consider it invalid, as having been reluctantly or unwillingly signed under duress.[5]

On the path that was leading him into exile in India, the 14th Dalai Lama arrived March 26, 1959 at Lhuntse Dzong where he repudiated the "17-point Agreement" as having been "thrust upon Tibetan Government and people by the threat of arms."[4] and reaffirmed his government as the only legitimate representative of Tibet.[6][7] 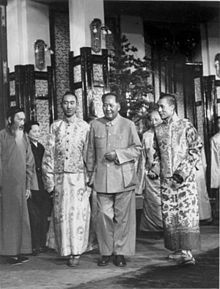 The 14th Dalai Lama and Panchen Lama meeting with Mao Zedong in 1955.

The People's Liberation Army crossed the Jinsha River on 6 or 7 October 1950 and had defeated the Tibetan army by 19 October.[8][9] Instead of continuing with the military campaign, China asked Tibet to send representatives to Beijing to negotiate an agreement. The draft agreement was written by China, and Tibetan representatives were not allowed to suggest any alterations. China did not allow the Tibetan representatives to communicate with Lhasa. The Tibetan delegation was not authorized by Lhasa to sign, but ultimately submitted to pressure from the Chinese to sign anyway, using seals which had been specifically made for the purpose.[10]

However, Tibetologist Melvyn Goldstein, who interviewed at least two negotiators and the only interpreter (the Dalai Lama's brother-in-law) from the Tibetan side, provides a different account:

And, as a Tibetan negotiator recalled, instances indeed exist when the Tibetan delegates, with Dalai Lama's authorization,[12] were free to suggest alteration.[13] 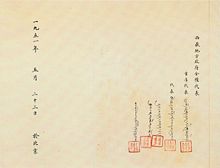 Signed and sealed by delegates of the Central People's Government with full powers:

Delegates with full powers of the Local Government of Tibet: