Ifá refers to the system of divination and the verses of the literary corpus known as the Odú Ifá. Yoruba religion identifies Orunmila as the Grand Priest; as that which revealed Oracle divinity to the world. Such is his association with the Oracle divinity; in some instances, the term "Orunmila" is used interchangeably with Ifá.

Originating in West Africa in the form of a stringent Yoruba philosophy; celebrated in traditional African medicine, Santería (referred to as Lukumi), Candomblé, West African & Diaspora Vodou, and similarly in Orisa'Ifa lineages all over the globe.

In the Yoruba religion, divination gives priests unreserved access to the teachings of Orunmila. Esu, is seen as being in charge of justice and the transportation of ebos, one said to lend authority (ase) to the oracle during provision of direction and or clarification of counsel. Ifa divination rites are claimed to provide an avenue of communication to the spiritual realm.

In Togo, Ifá is known as Afa, where the Vodou deities come through and speak. In many of their Egbes, it is Alaundje who is honored as the first Bokono to have been taught how to divine the destiny of humans using the holy system of Afa. The Ifa Divination system was added in 2005 by UNESCO to its list of "Masterpieces of the Oral and Intangible Heritage of Humanity".

Performing Ifa divination is called Ifa dida or idafa (or dida owo and ounte ale).[1] Ifa dida / Idafa is performed by a Babalawo or Iyalawo or iyanifa (an initiated priest or priestess). Babalawo can be translated as "father of the secrets" while "Iyalawo" {mother of secret} or sometimes "Iyanifa" means "mother that has Ifa(i.e. its blessing)". The babalawo or iyanifa provides insights about the current circumstances impacting the life of a person requesting this information and provides any necessary information to aid the individual. Awo is a reference for devotees in Orisa worship. It includes Babalawos, Iyalawo,Iyanifas, Babalorishas, Iyalorishas and even uninitiated devotees.

Initiation into Ifa requires rigorous study. A Babalawo must learn and understand each of the 256 chapters (Odu) of Ifa. The minimum of four verses will of necessity include ebos and ooguns (medicine) that are embedded and relevant to each of the verses, plus other issues that complement divination. An accomplished Babalawo must know about ten verses of each of the 256 chapters of Ifa (256 Odu Ifa). Regardless of gender, whoever aspires to practice Ifa must have this qualification. In essence, Ifa practice does not preclude a woman provided such woman acquires the required qualification. Odu—a special Orisa—can only be received by a Babalawo who decides to perform the special initiation that will allow him access to Odu. In essence, initiation into Ifa is the first step towards initiation into Odu. A woman cannot be initiated into Odu. This is because since she already has a womb, she has no need to receive Odu. It can be said to be redundant. Character Traits of a Awo: Orunmila demands humility from his priests and priestesses, therefore, a Babalawo should be an embodiment of patience, good character, honesty, and humility.

Apetebi is a title given to the wife of a Babalawo. Apetebi is the name Orunmila gave to his wife, whom he cured from leprosy before giving birth to his child. This is from the Sacred Odu Ifa Obara Ogunda.

Iyanifa is the title of an initiated female priestess of IFA. 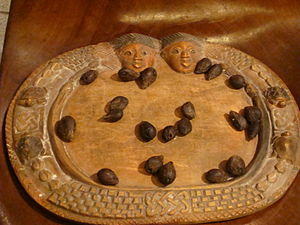 Special instruments are used to assist in the divination to transcribe Orunmila's wisdom through the diviner. The items used for divination include:

The (opon Ifa) or tray and (iroke Ifa) or tapper are used in Ifa divination, a central ritual within Ifa tradition. This tray, adorned with carved images and dusted with powder, serves as the template on which sacred signs (odu) related to the personal concerns of a diviner's client are traced as the point of departure for analysis. In contrast to those transitory signs, the more permanent backdrop of the carved motifs on the tapper and tray constitutes an artistic exegesis of the forces that shape human experience and the universal needs fulfilled by such quests for enlightenment.

To initiate the ritual, the babalawo/iyanifa places the tray in front of him and taps rhythmically on it with the pointed end of the tapper, invoking the presence of Orunmila, past diviners, and other Orisa.

There are a variety of Ikin (sacred palm nuts) that are available, but only 4 "eyes" ikin must be used for ifa divination. The Ikin (sacred palm nuts) are grouped in one hand, then the diviner attempts to shift them all to his/her other hand at once, and counts the remaining Ikin left, hopefully to discover that either one or two remain. (Odu, which are the foundation of the binary data, can only be marked with either one or two palm nuts, remaining in the diviner's original hand. As this process goes on, the diviner marks single or double marks in wood powder spread on his divination tray until he or she has created one of the 256 odus that are available.[3]

Each of these odus is associated with a traditional set of Ese (poetic tutorials), often relating to Yoruba religion, which explain their divinatory meaning. These tutorials represent thousands of years of observation and are filled with predictions, and both mundane and spiritual prescriptions that resolve issues found in that Odu. Within Ifa, Believers find all the knowledge of the world past, present. and future.

After obtaining the Odu that governs a situation or event, the diviner then determines whether the Odu comes with Ire (signifies good outcome; good times; good news; goodluck; e.t.c) or Ibi (which could be viewed as obstacles or impediments to success). After this process the diviner now determines appropriate offerings, spiritual disclipines and/or behavioral changes that are Ọwọ̀n - necessary to bring, keep or compel success for the person receiving divinatory counsel.[2]

There are sixteen major books in Odu Ifa[4] literary corpus. When combined there are total of 256 Odu[5] (a collection of sixteen, each of which has sixteen alternatives ⇔ 16^2, or 4^4) believed to reference all situations, circumstances, actions and consequences in life based on the uncountable ese (poetic tutorials) relative to the 256 Odu coding. These form the basis of traditional Yoruba spiritual knowledge and are the foundation of all Yoruba divination systems.

Where I is an odd count or a "heads" result, and II is an even count or a "tails" result, the sixteen basic patterns and their Yoruba names are set forth in the sidebar (please note this is only one way of ordering them, this changes depending on area within Nigeria, or the diaspora. An alternative order used in Ibadan, and Cuba is: Ejiogbe, Oyekun meji, Iwori Meji, Idi Meji, Irosun Meji, Oworin Meji, Obara Meji, Okanran Meji, Ogunda Meji, Osa Meji, Ika Meji, Oturupon Meji, Otura Meji, Irete Meji, Oshe Meji, Ofun Meji. Heepa Odu! This is important to note as it changes the outcomes of certain parts of the reading).

The babalawo recites a series of poems with proverbs and stories from the Ifa poetry that go with that choice. The final interpretation is made by the person seeking guidance, who decides how the verses that the babalawo has recited should be applied to the problem at hand. (This may be one style, however other schools of thought with Ifa have the Diviner interpreting what Ifa says and not simply chanting and leaving it to the client) Though the number of symbols is different, the Chinese I Ching divination system also bears some resemblance to Ifa divination. Like the I Ching, Ifa combines a large body of wisdom literature with a system for selecting the appropriate passages from it. Unlike the I Ching, however, Ifa poetry is not written down but passed down orally from one babalawo to another. Today, there are many texts that are designed to help Babalawos to learn and retain the huge corpus of knowledge.

Believers deem Ifa as being nothing but the "truth"; functioning to the devoted as not only a system of guidance, but one that fuses way of living with the psychological, providing them with a legitimate course of action that is genuine and unequivocal.

Ifá invest with me,
As Éjìwòrì invested interest in his protégée,
Ifá smile upon me,.

Ifa priests, devotees, celebrants and believers sometimes inherit names related to the divinity; typically, but not necessarily, beginning with the term ‘Ifa’, like Ifadairo, Ifabiyi, Ifadare, Ifabunmi, etc. The first "I" in these names may be omitted to form Fadairo, Fabiyi, Fadare, Fabunmi, Falola, etc. The prefix "Awo" is also used in names ascribing Ifa or the fellowship - Awolalu, Awodele, Awolowo, Awosika, etc.