Clutch is an American rock band from Germantown, Maryland, formed in 1990. The band's first release was an EP entitled Pitchfork, which debuted in October 1990. Their first studio album, Transnational Speedway League, was released three years later in 1993. To date, Clutch has released nine studio albums, and several rarities and live albums. They now own their own label, Weathermaker.[1] 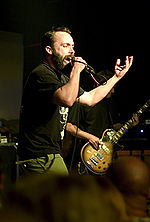 Neil Fallon and Clutch performing in 2007.

Clutch formed in 1990 by Dan Mains (bass) and Jean Paul Gaster (drums) meeting. Soon after they got a singer and then recruited Tim Sult (guitar) and built a local following through constant live performances. At one show the lead singer couldnt make it so Neil Fallon, a back up singer, sang lead and got put up as their lead singer. Following the initial 7" single release of "Passive Restraints" on the Earache label, Clutch was signed by the EastWest Records label. The debut LP, Transnational Speedway League, was released in 1993. It was followed by a self-titled album two years later that afforded Clutch mainstream exposure. The band moved to the larger Columbia label for 1998's The Elephant Riders release.[1]

Pure Rock Fury appeared in 2001 on the Atlantic label. The title track was initially released as the first single. The program director for North Carolina rock station, WXQR (Rock 105), Brian Rickman, suggested that the label switch singles to another track from the album, "Careful with that Mic". Atlantic did so, and Clutch was afforded a surprise hit single. The follow-up tracks, "Immortal" and "Open Up the Border" were also well-received by American rock stations.

Among Clutch's numerous side releases were a groove-based album, 2000's Jam Room, as well as Live at the Googolplex and the rarities record Slow Hole to China, both issued in 2003. The 2005 release Pitchfork & Lost Needles combined Clutch's 1990 Pitchfork 7 with unreleased demos and early tracks. In 2005 the band saw their first lineup change since the early 1990s with the addition of organist Mick Schauer, who performed on the albums Robot Hive/Exodus and From Beale Street to Oblivion. The latter album was released in March 2007 and featured producer Joe Barresi (Kyuss, Melvins, Queens of the Stone Age, Tool). The album was leaked onto the internet in early March. Critical reaction has been overwhelmingly positive; the magazine Metal Hammer called it a "future classic, the best album the group has ever produced, and easily a front runner for album of the year."[citation needed]

While the band has not recovered their previous radio airplay with subsequent releases, Clutch have accumulated a devoted cult following. The following has been cultivated by an ambitious touring schedule; the band often performs more than one hundred shows per year. The band's first live DVD, Full Fathom Five, and accompanying CD, produced/directed by Agent Ogden, were released in September 2008. A dual DVD set, also produced/directed by Agent Ogden, called "Live at the 9:30" was released in 2010. It featured a 90min live performance from the 9:30 Club in Washington, DC and a 90 min Road movie entitled, "Fortune Tellers Make A Killing Nowadays". The band also released a remastered version of Slow Hole to China: Rare and Unreleased on April 28, 2009.

The band's ninth studio album Strange Cousins from the West, was released on July 14, 2009. Songs from the album were played live on tour prior to the album's recording.

On March 9, 2010, the band announced via its Myspace page, a 2 disc DVD set Clutch Live at the 9:30 via Weathermaker Music was due for a May 11, 2010 release. The set includes the entire December 28, 2009 show at Washington, D.C.'s 9:30 club, which the band performed the entire self-titled LP. The second disc is to include a road movie entitled Fortune Tellers Make a Killing Nowadays, produced/directed by Agent Ogden, which is rumored to include material from as far back as 1991.

On May 10, 2011, Clutch re-issued their 2004 album Blast Tyrant on Weathermaker Music. The new edition contained a bonus album known as Basket of Eggs, which includes unreleased songs as well as acoustic versions of previous hits.[3][4] In its first week of release Blast Tyrant sold close to 3,000 copies nationally, landing it an upper echelon re-debut at #26 on the Billboard Hard Rock Top 100, more than 7 years after the original version debuted at #15.

In July 2011, New Belgium Brewing Company released a beer named after Clutch as part of their Lips of Faith series.[1]

Each Clutch album is marked by a distinct and cohesive sound dubbed the ultimate jam band. The musical style of the band has migrated from heavy metal and hardcore punk to hard rock. The band has also integrated funk influences into their rock sound. Strong blues influences have also become prominent in the releases of the later years as vocalist/guitarist Neil Fallon notes: "We've been really conscious of the blues over the last couple of years, and you have to admit that the blues really is the source of all rock and roll. I think it's important to go to the source to find that inspiration."[5]

The lyrics of Clutch songs have progressed from early releases that were marked with an angry, serious tone to latter releases that are characterized by intelligence, wordplay, and subtle humour. The songs make frequent references to history, mythology, popular culture, and religion; for example, "I Have the Body of John Wilkes Booth", from the self-titled album, tells the story of a fisherman who discovers the corpse of Lincoln's assassin in the Susquehanna River. Jam Room's "Release the Kraken" inserts a hero called Useless the Younger into the movie Clash of the Titans. The band's lyrics also often contain surrealistic imagery.

Clutch members also feature in several other musical projects. Drummer Jean-Paul Gaster made an appearance on the album The Mystery Spot of blues-rock band Five Horse Johnson. The album was released on May 23, 2006 via Small Stone Records.[6] In 2007, Gaster collaborated with Opeth keyboardist Per Wiberg and Kamchatka guitarist Thomas Andersson in a band called King Hobo, which has thus far released one album.[7] Gaster also appears on the album Punctuated Equilibrium by Scott "Wino" Weinrich, released via Southern Lord Records in 2009.

Neil Fallon has provided guest vocals on the songs "Two Coins for Eyes" and "Empire's End" on the 2008 album Beyond Colossal by Swedish stoner rock band Dozer; "Crazy Horses" (Osmonds cover) by Throat; "Slippin' Out" by Never Got Caught; "Mummies Wrapped in Money" by Lionize; and "Blood and Thunder" by Mastodon (band), on their 2004 album Leviathan. Fallon is also the singer for The Company Band.

Clutch in other media

Fallon's younger sister Mary Alice Fallon-Yeskey appears in the Food Network reality show Ace of Cakes as office manager of Charm City Cakes in Baltimore, Maryland. One episode featured a cake, in the style of an amp, being made for the band. In late 2009, the Clutch song "Electric Worry" was used in a commercial to promote the video game Left 4 Dead 2 created by Valve Software, the song "10001110101" also was featured in the Human Head Studios developed 2006 first person shooter Prey as a selectable song playing in a jukebox at a bar in the game's opening scene. The Clutch song "The Incomparable Mr. Flannery" is used in highlight clips during Fox NFL games. The song "Spleen Merchant" has also been used as a commercial bumper in the nationally-syndicated Nights with Alice Cooper radio show. The song "Power Player" features in Need For Speed Pro Street. The song "Immortal" appears in the fifth mission of Hitman: Contracts inside the bikers HQ. The song "Power Player" was used in an episode of the television show Sons of Anarchy as well as promotional advertisements for NASCAR. The song "Electric Worry" is used in the movie trailer for Race Across the Skyas well as in the promotional commercials for TNT's "Memphis Beat" TV show. The song "Big News 1" was used in the movie Haggard. The song "Electric Worry" is also used as a theme song in the Mucha Lucha spin-off The Hairy Knuckle Show. Also the Clutch songs "50,000 Unstoppable Watts" and "Escape from the Prison Planet" have been used for intermissions for the news radio show Alex Jones. "Mice and Gods" was used by DaMarques Johnson as entrance music at UFC 112. Their song the "Promoter" is the theme song for long running and popular podcast Weekend Justice which was given permission by the band to use the song.