DaMarques Johnson (born June 28, 1982) is an American mixed martial artist. He was the runner up for the welterweights on The Ultimate Fighter: United States vs. United Kingdom.

Johnson was born and raised in West Jordan, Utah, he and his family were poor and lived in a bad part of the town.[2] Johnson was primarily raised by his Mormon mother, as his father died when he was nine years old.[2] Johnson attended and graduated from Kearns High School. In 2000, Johnson joined the United States Army and National Guard, an option given to him as a kid to get out of some trouble.[2] Johnson worked in the S-1 and did paperwork for other Soldiers while assigned to a Special Forces Group. Johnson took up jiu jutsu in the army.He trained at Close Combat Institute (CCI)[3] After returning to civilian life following his 8 years of active duty, he met Jeremy Horn and began training mixed martial arts at his gym.[4] Johnson had his first fight in 2005, losing by technical knockout. He was submitted by the highly-regarded Brock Larson in his second fight. In his third pro fight, Johnson had his first win at a King of the Cage event, winning the fight by submission due to punches.[5]

Johnson appeared on The Ultimate Fighter: United States vs. United Kingdom. He defeated Ray Elbe by technical knockout in an elimination match earning him a spot on the United States team. Johnson won his second fight against Dean Amasinger by submission using a triangle choke, which is noted by his coaches and teammates to be his signature submission move. Johnson won his semi-final match up against Nick Osipczak by unanimous decision. This win earned him the first spot in the welterweight finals.[7]

Johnson also gained notoriety throughout the series due to his ongoing feud with Team UK coach Michael Bisping. Tensions reached an all-time high after Bisping squirted water into Johnson's face citing that Johnson had made a racist comment toward him earlier in the week. However, the comment was made by fellow USA team mate Cameron Dollar, causing Bisping to apologize to Johnson for his behavior.

Johnson lost his Ultimate Fighting Championship debut when he fought James Wilks on June 20, 2009 in Las Vegas to crown the winner of TUF 9 welterweight. Johnson was overwhelmingly defeated after Wilks applied a rear naked choke with six seconds left in round one. After the finale, Johnson was offered a multi-fight contract with the UFC. 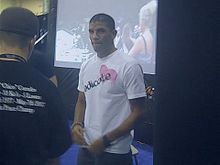 Johnson was scheduled to face against Peter Sobotta on November 14, 2009 at UFC 105, but the bout was cancelled due to a military commitment for Sobotta.[8][9] Johnson instead fought and defeated Edgar Garcia via submission (triangle choke) at UFC 107 in his first career pay-per-view fight and he even earned the Submission of the Night award.[10] UFC.com ranked the submission fourth in the UFC's 2009 Submission of Year and had honorable mention for UFC's 2009 Fight of the Year.

At UFC 112, Johnson fought seasoned veteran Brad Blackburn, defeating him via TKO after a strong kick to the body.[11][12] Johnson received knockout of the night honors, adding an extra $75,000 to his paycheck.

Johnson then faced Matt Riddle on August 1, 2010, at UFC on Versus 2. However, Johnson weighed in at 172.5 lbs (and only lost half a pound after the weigh-in). Johnson had to give up 20% of his purse to Matt Riddle. [13] Riddle eventually defeated Johnson via TKO in the second round.

Johnson next faced Mike Guymon on January 22, 2011 at UFC Fight Night 23.[14] He won the fight via verbal submission in the first round after applying a body triangle.

Johnson faced Amir Sadollah on March 26, 2011 at UFC Fight Night 24, replacing an injured James Wilks on just two weeks notice.[15] Johnson lost the bout in the second round due to a tapout to elbows while he was trapped in the 'gift wrap' control.

Johnson was expected to face Clay Harvison on September 17, 2011 at UFC Fight Night 25[16] However, Johnson was forced from the bout with an injury and replaced by Seth Baczynski.[17] The fight against Harvison was then rebooked to take place on November 12, 2011 at UFC on Fox 1.[18] Johnson won the fight via first round KO after hitting Harvison with an uppercut that knocked him down and seemingly unconscious.

Johnson has a son named Maxton.[2]