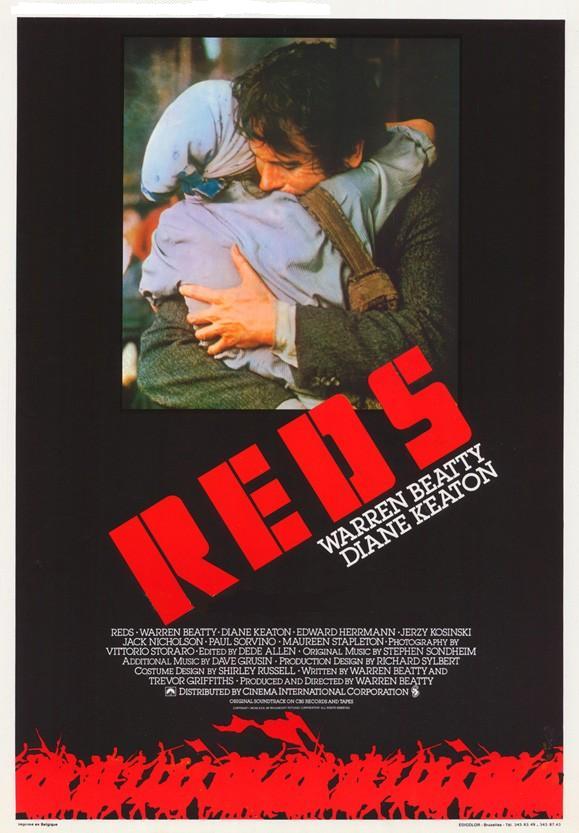 
"Reds" is a 1981 film starring and . It centers on the life of John Reed, the Communist, journalist, and writer who chronicled the Russian Revolution in his book "".

Besides Beatty and Keaton, the movie stars , , , , , , , and . It was adapted by Warren Beatty, (uncredited), , (uncredited) and from Reed's memoir. It was produced and directed by Beatty.

"Some are very well known, others less so."

Warren Beatty came across the story of John Reed in the mid 1960s and film editor remembers Beatty mentioning making a film about Reed's life as far back as 1966. Later, in the 1970s Beatty would begin to write the first drafts of what would later become "Reds", but the process stalled. In 1976, Beatty though would find a suitable collaborator in who began work but was delayed when his wife died in a plane crash. [cite news | author = | title = Thunder on the Left | date = 2006-03 | url = http://www.vanityfair.com/culture/features/2006/03/reds200603?currentPage=1| accessdate= 2008-06-23] The first draft of the script was finished in 1978 but Beatty had problems with it and the two spent four and a half months on fixing it and later Beatty's friend would also collaborate on the script.

Beatty originally had no intention of acting in the film or even directing it because he had learned on various projects that producing a film alone is a difficult task. He considered for the part of John Reed because the two looked similar but eventually Beatty decided to act in the film and direct it himself. Jack Nicholson was cast as over and . [cite news | author = | title = Thunder on the Left | date = 2006-03 | url = http://www.vanityfair.com/culture/features/2006/03/reds200603?currentPage=4| accessdate= 2008-06-23]

When principal photography began in August 1979 the original intention was for a 15 to 16 week shoot but it would take one whole year to just shoot the film. The process was slow because it was shot in five different countries and at various points the crew had to wait for snow to fall in (and other parts of), which stood in for the , and for rain to stop in . Beatty would also not stop the camera between takes and would have it continuously roll. He also insisted on a large amount of takes. said he did as many as 70 takes for one scene and actress had to do 80 takes of one particular scene which caused her to quip to Beatty, "Are you out of your fucking mind?". [cite news | author = | title = Thunder on the Left | date = 2006-03 | url = http://www.vanityfair.com/culture/features/2006/03/reds200603?currentPage=7| accessdate= 2008-06-23]

and Beatty's romantic relationship also began to deteriorate during the filming as Peter Biskind writing about the making of "Reds" said, "Beatty’s relationship with Keaton barely survived the shoot. It is always a dicey proposition when an actress works with a star or director—both, in this case—with whom she has an offscreen relationship. ... Keaton appeared in more scenes than any other actor, save Beatty, and many of them were difficult ones, where she had to assay a wide range of feelings, from romantic passion to anger, and deliver several lengthy, complex, emotional speeches. George Plimpton once observed, “Diane almost got broken. I thought [Beatty] was trying to break her into what Louise Bryant had been like with John Reed.” Adds executive producer Simon Relph, “It must have been a strain on their relationship, because he was completely obsessive, relentless.” [cite news | author = | title = Thunder on the Left | date = 2006-03 | url = http://www.vanityfair.com/culture/features/2006/03/reds200603?currentPage=8| accessdate= 2008-06-23]