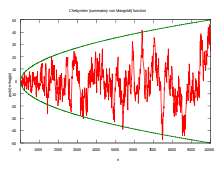 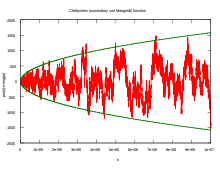 with the sum extending over all prime numbers p that are less than or equal to x.

The second Chebyshev function ψ(x) is defined similarly, with the sum extending over all prime powers not exceeding x:

Both functions are named in honour of Pafnuty Chebyshev.

where k is the unique integer such that pk ≤ x but pk+1 > x. A more direct relationship is given by

Note that this last sum has only a finite number of non-vanishing terms, as

The second Chebyshev function is the logarithm of the least common multiple of the integers from 1 to n.

Further, under the Riemann hypothesis,

In 1895, Hans Carl Friedrich von Mangoldt proved[3] an explicit expression for ψ(x) as a sum over the nontrivial zeros of the Riemann zeta function:

(The numerical value of ζ'(0)/ζ(0) is log(2π).) Here ρ runs over the nontrivial zeros of the zeta function, and ψ0 is the same as ψ, except that at its jump discontinuities (the prime powers) it takes the value halfway between the values to the left and the right:

From the Taylor series for the logarithm, the last term in the explicit formula can be understood as a summation of xω / ω over the trivial zeros of the zeta function,

Similarly, the first term, x = x1/1, corresponds to the simple pole of the zeta function at 1. Its being a pole rather than zero accounts for the opposite sign of the term.

A theorem due to Erhard Schmidt states that, for some explicit positive constant K, there are infinitely many natural numbers x such that

and infinitely many natural numbers x such that

In little-o notation, one may write the above as

Hardy and Littlewood[6] prove the stronger result, that

The first Chebyshev function is the logarithm of the primorial of x, denoted x#:

This proves that the primorial x# is asymptotically equal to exp((1+o(1))x), where "o" is the little-o notation (see Big O notation) and together with the prime number theorem establishes the asymptotic behavior of pn#.

Relation to the prime-counting function

The Chebyshev function can be related to the prime-counting function as follows. Define

The transition from Π to the prime-counting function, π, is made through the equation

, so for the sake of approximation, this last relation can be recast in the form

The Riemann hypothesis states that all nontrivial zeros of the zeta function have real part 1/2. In this case,

, and it can be shown that

By the above, this implies

Good evidence that RH could be true comes from the fact proposed by Alain Connes and others, that if we differentiate the von Mangoldt formula with respect to x make x = exp(u). Manipulating, we have the "Trace formula" for the exponential of the Hamiltonian operator satisfying 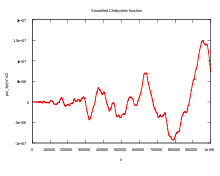 The smoothing function is defined as

It can be shown that

The Chebyshev function evaluated at x = exp(t) minimizes the functional