The von Mangoldt function, conventionally written as Λ(n), is defined as

It is an example of an important arithmetic function that is neither multiplicative nor additive.

that is, the sum is taken over all integers d which divide n. This is proved by the fundamental theorem of arithmetic, since the terms that are not powers of primes are equal to 0.

For instance, let n=12. Recall the prime factorization of 12, 12=22·3, which will turn up in the example.
Take the summation over all distinct positive divisors d of n:

This provides an example of how the summation of the von Mangoldt function equals log (n).

The summatory von Mangoldt function, ψ(x), also known as the Chebyshev function, is defined as

von Mangoldt provided a rigorous proof of an explicit formula for ψ(x) involving a sum over the non-trivial zeros of the Riemann zeta function. This was an important part of the first proof of the prime number theorem.

The von Mangoldt function plays an important role in the theory of Dirichlet series, and in particular, the Riemann zeta function. In particular, one has

. The logarithmic derivative is then

These are special cases of a more general relation on Dirichlet series.[1] If one has

for a completely multiplicative function f(n), and the series converges for

The Mellin transform of the Chebyshev function can be found by applying Perron's formula: 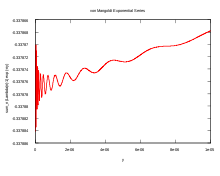 An exponential series involving the von Mangoldt function, summed up to the first 109 terms

Hardy and Littlewood examine the series[2]

. Assuming the Riemann hypothesis, they demonstrate that

Curiously, they also show that this function is oscillatory as well, with diverging oscillations. In particular, there exists a value K > 0 such that

infinitely often. The graphic to the right indicates that this behaviour is not at first numerically obvious: the oscillations are not clearly seen until the series is summed in excess of 100 million terms, and are only readily visible when y < 10 − 5.

The Riesz mean of the von Mangoldt function is given by

Here, λ and δ are numbers characterizing the Riesz mean. One must take c > 1. The sum over ρ is the sum over the zeroes of the Riemann zeta function, and

can be shown to be a convergent series for λ > 1.

The terms of the von Mangoldt function can be expanded into series which have numerators that form a symmetric matrix starting:

This matrix is defined by the recurrence:

The von Mangoldt function can then for n > 1 be calculated as:[3]