One of nine children,[2] Chebyshev was born in the village of Okatovo in the district of Borovsk, province of Kaluga. His father, Lev Pavlovich, was a Russian nobleman and wealthy landowner. Pafnuty Lvovich was first educated at home by his mother Agrafena Ivanovna (in reading and writing) and by his cousin Avdotya Kvintillianovna Sukhareva (in French and arithmetic). Chebyshev mentioned that his music teacher also played an important role in his education, for she "raised his mind to exactness and analysis."

A physical handicap (of unknown cause) affected Chebyshev's adolescence and development. From childhood, he limped and walked with a stick and so his parents abandoned the idea of his becoming an officer in the family tradition. His disability prevented his playing many children's games and he devoted himself instead to mathematics.

In 1832, the family moved to Moscow, mainly to attend to the education of their eldest sons (Pafnuty and Pavel, who would become lawyers). Education continued at home and his parents engaged teachers of excellent reputation, including (for mathematics and physics) P.N. Pogorelski, held to be one of the best teachers in Moscow and who had taught (for example) the writer Ivan Sergeevich Turgenev.

In summer 1837, Chebyshev passed the registration examinations and, in September of that year, began his mathematical studies at the second philosophical department of Moscow University. His teachers included N.D. Brashman, N.E. Zernov and D.M. Perevoshchikov of whom it seems clear that Brashman had the greatest influence on Chebyshev. Brashman instructed him in practical mechanics and probably showed him the work of French engineer J.V. Poncelet. In 1841 Chebyshev was awarded the silver medal for his work "calculation of the roots of equations" which he had finished in 1838. In this, Chebyshev derived an approximating algorithm for the solution of algebraic equations of nth degree based on Newton's algorithm. In the same year he finished his studies as "most outstanding candidate".

In 1841, Chebyshev's financial situation changed drastically. There was famine in Russia and his parents were forced to leave Moscow. Although they could no longer support their son, he decided to continue his mathematical studies and prepared for the master examinations, which lasted six months. Chebyshev passed the final examination in October 1843 and, in 1846, defended his master thesis "An Essay on the Elementary Analysis of the Theory of Probability." His biographer Prudnikov suggests that Chebyshev was directed to this subject after learning of recently-published books on probability theory or on the revenue of the Russian insurance industry.

In 1847, Chebyshev promoted his thesis pro venia legendi "On integration with the help of logarithms" at St Petersburg University and thus obtained the right to teach there as a lecturer. At that time some of Leonhard Euler's works were rediscovered by P. N. Fuss and were being edited by V. Ya. Bunyakovsky, who encouraged Chebyshev to study them. This would come to influence Chebyshev's work. In 1848, he submitted his work The Theory of Congruences for a doctorate, which he defended in May 1849. He was elected an extraordinary professor at St Petersburg University in 1850, ordinary professor in 1860 and, after 25 years of lectureship, he became merited professor in 1872. In 1882 he left the university and devoted his life to research.

During his lectureship at the university (1852–1858), Chebyshev also taught practical mechanics at the Alexander Lyceum in Tsarskoe Selo (now Pushkin), a southern suburb of St Petersburg.

His scientific achievements were the reason for his election as junior academician (adjunkt) in 1856. Later, he became an extraordinary (1856) and in 1858 an ordinary member of the Imperial Academy of Sciences. In the same year he became an honorary member of Moscow University. He accepted other honorary appointments and was decorated several times. In 1856, Chebyshev became a member of the scientific committee of the ministry of national education. In 1859, he became an ordinary member of the ordnance department of the academy with the adoption of the headship of the commission for mathematical questions according to ordnance and experiments related to ballistics. The Paris academy elected him corresponding member in 1860 and full foreign member in 1874. In 1893, he was elected honorable member of the St. Petersburg Mathematical Society, which had been founded three years earlier.

Chebyshev is known for his work in the field of probability, statistics and number theory. Chebyshev's inequality says that if X is a random variable with standard deviation σ, the probability that the outcome of X is no less than aσ away from its mean is no more than 1 / a2:

Chebyshev's inequality is used to prove the weak law of large numbers.

The Bertrand–Chebyshev theorem (1845|1850) states that for any n > 1, there exists a prime number p such that n < p < 2n. It is a consequence of Chebyshev inequalities for the number π(n) of prime numbers less than n, which state that π(n) is of the order of n / log(n). A more precise form is given by the celebrated prime number theorem: the quotient of the two expressions approaches 1 as n tends to infinity. 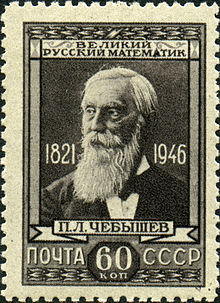 Pafnuty Chebyshev on a 1946 stamp of the Union of Soviet Socialist Republics.

Chebyshev is considered a founding father of Russian mathematics. Among his well-known students were the prolific mathematicians Dmitry Grave, Aleksandr Korkin, Aleksandr Lyapunov and Andrey Markov. According to the Mathematics Genealogy Project, Chebyshev has 7,483 mathematical "descendants" as of 2010.[3]

The crater Chebyshev on the Moon and the asteroid 2010 Chebyshev are named in his honour.