Mireille is an opera in five acts by Charles Gounod to a French libretto by Michel Carré after Frédéric Mistral's poem Mireio.

Mistral had become well-known in Paris with the publication of the French prose translation of Mireio in 1859, and Gounod knew the work by 1861.[1] Gounod was charmed by the originality of the work, the story being much less contrived than many of those on the operatic stage at the time.[2] The action of the opera is quite faithful to Mistral although the sequence of events of the Val d’Enfer (Act 3, Scene 1) and Mireille's avowal of her love of Vincent to her father (Act 2 finale) are reversed in the opera.[3]

During the course of composition Gounod spent much time in Provence (12 March to the end of May 1863), visiting the sites of the action in the poem/opera, and met Mistral on several occasions at his home in Maillane [4]. Gounod stayed at the Hôtel de la Ville Vert in Saint-Rémy-de-Provence, and was treated to a banquet by the townspeople on May 26.[2] Presenting class differences in a rural setting was not usual at the time, and as Huebner comments "some early reviewers had difficulty accepting that a 'mere' country girl could sing a heroic aria such as "En marche".[1] It has been argued that "what matters in this extended lyric poem is not the story but the rich tapestry or Provençal traditions, beliefs and customs".[5] 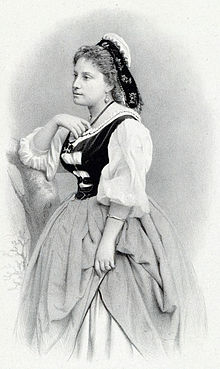 The run-through of the work at Gounod's house included Georges Bizet on the piano and Camille Saint-Saëns on the harmonium. Gounod and the Vicomtesse de Grandval (a composer herself) sang the solo parts.[6]

The opera premiered at the Théâtre Lyrique, Paris on March 19, 1864; the first night was attended by Ivan Turgenev, who in a letter to Pauline Viardot, ridicules part of Act 3.[3]

As with the role of 'Marguerite' in Faust, Gounod's demands on his principal soprano are particularly onerous – from light soprano in Act I to more dramatic singing in Act IV. Even before the premiere Gounod had been forced by his prima donna to make many changes to the form and content of his opera.[3] This caused vocal problems for Miolan-Carvalho - wife of the theatre director - who got Gounod to make the role easier for her and particularly more 'brilliant'. Gounod even marked in the manuscript that the roulades at the end of her Act 2 air were demanded by her.[7]

Criticisms of the original performances led to a revised version in three acts which was presented in Paris, on December 15, 1864, and yet another version with a happy ending for the Opéra-Comique in 1889. December performances of Mireille also included a revised ending to the overture (which has been used ever since although the original slower coda is printed in the 1970 vocal score) and the 'valse-ariette' "O légère hirondelle" for Mireille in Act I.[3]

Mireille was seen in London, Dublin and Philadelphia in 1864 and Antwerp in 1865. Adelina Patti sang the title role in an Italian production in St Petersburg in 1874 with her husband Nicolini as Vincent.[7]

In 1939 an attempt was made to revert to Gounod's original thoughts[8], and productions since then have generally followed the five act structure in a version edited by Henri Büsser.
Whether the Busser edition (based on a new production in Paris, 6 June 1939, revived in Arles, 28 June 1941)[8] is a true reflection of the original score is doubtful: there may have been spoken dialogue at the première rather than recitatives; the end of Act II was originally a repeat of the concertato, not a recollection of the Chanson de Magali.[3]

Critical reaction to the first performances was negative with accusations of Wagnerism.[6] The three act version pleased some later writers, who admired "warmth and colour" and found it "glows with the life and sunlight of the south".[9]

Girls sing as they pick the leaves to feed to silkworms. Taven, an old woman who lives in nearby caves, joins them and comments on their jollity, but they laugh at "the witch" and Clemence voices her wish for a rich husband. Mireille however wants to marry for love, even if her husband be poor and shy, but is teased by the other girls who know that she has set her heart on a poor basket-weaver, Vincent. Taven shares her forebodings with Mireille. Vincent passes by and Mireille gets him to confess his love. As they part, they swear to meet in the church of Saintes-Maries-de-la-Mer if anything befalls one of them. The girls are heard singing the opening chorus in the distance. 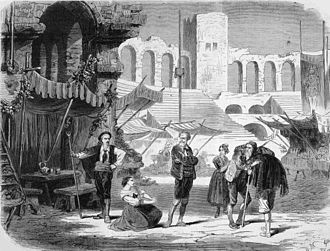 Act 2 finale in the original 1864 production

In front of the Arles Amphitheatre the same afternoon.

The crowd is singing and dancing a farandole as it waits for the start of a race. Mireille and Vincent arrive separately but they are greeted joyfully and sing the Song of Magali. After the race, Taven takes Mireille aside and tells her that she has just seen three young men, Ourrias, Alari and Pascoul arguing who should claim Mireille's hand. Alone, Mireille swears that nothing will part her from Vincent. Ourrias enters and forces his boastful attentions on her but Mireille politely rejects his advances. Mireille's father Ramon enters, followed shortly by Ambroise, the father of Vincent. Ambroise asks for advice on what to do about his son who is in love with a rich heiress; Ramon suggests beating the boy to cure him. Shocked, Ambroise is reminded by Ramon of a father's prerogative which used to extend even to life and death over his children. At this, Mireille comes forward crying "Kill me!" - she is the one Vincent loves. Ramon is outraged, orders Mireille to go home then turns on Vincent and Ambroise.

First Tableau: The Val d'Enfer in the country outside Arles. Night 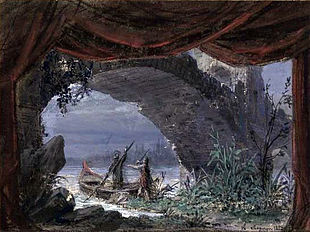 Ourrias and some friends are in the wild spot, supposedly peopled by spirits. Ourrias wants to buy a potion from Taven. Alone, Ourrias vents his fury and jealousy and lies in wait for Vincent, who soon appears. Ourrias insults him but although Vincent tries to calm him down, Ourrias strikes him with his trident, and thinking he has killed him, runs off. Taven hears cries and curses Ourrias as he rushes off, then tends to the unconscious Vincent.

Second Tableau: The banks of the Rhône

Full of remorse, Ourrias hurries to the river bank and calls the ferryman. An echo greets his call and moans sound with ghosts floating above the water. The ferryman (Passeur) arrives and Ourrias impatiently gets aboard. The waters swell, and as the boatman reminds Ourrias of his crime, the boat sinks beneath the waves.

While the harvesters celebrate, Ramon is sad and knows that by denying Mireille's love he has destroyed his dream of a happy old age. From her window Mireille sees a young shepherd singing, and envies his carefree life. Unseen, Vincenette, Vincent's sister, comes to tell her that Vincent is wounded: Mireille resolves to set off at once to Saintes-Maries.

Mireille, staggers in already tired, and dazzled by the sun, faints as she hears shepherd's pipes in the distance. She makes a last effort to continue her journey.

In front of the chapel of Saintes-Maries-de-la-Mer. Midday

Pilgrims are singing. Vincent is there, looking for Mireille, and she arrives, exhausted and collapses in his arms. Ramon arrives with Vincenette, and forgives her, but Mireille dies and is called to heaven by a celestial voice.

The overture, the most extended to any stage work by Gounod, opens with a passage which later serves as the introduction to the tableau in the Crau, and with its horn calls and shimmering harmony is evocative of hot open spaces. There follows a theme associated with Vincent and a farandole-like allegretto.[2]
According to Canteloube, the text of the Provençal folk-song 'Margarido, ma mio', found extensively in Provence, inspired Mistral's chanson Magali, while the music of the Chanson de Magali is based on the folksong 'Bouenjour, lou roussignou'. The alternating 9/8 6/8 time helps give the illusion of the fluidity of folk music.[11]
The farandole which opens Act 2 is more in the character of a rigaudon or bourrée, and the grand finale to Act 2 is rather conventional operatic style.
By contrast, the supernatural scenes are not meant to frighten – they are more examples of Gounod the tone-painter.[2] Act 3 allows Gounod to write "a Mendelssohnian scherzo with a dash of Berlioz and creates a frisson by means of chromatic harmony in the manner of Weber's Freischutz.[12]
The Chanson d’Andreloun was originally written for a projected opera 'Ivan IV'.[13] The musette in Act IV Sc 1 has the oboe and clarinet imitating a bagpipe, while in the final act the off-stage hymn Le voile enfin is an adaptation of the Latin sequence ‘Lauda Sion Salvatorem’.[2]
Overall the score "reminds us of the abundance and variety of Gounod's gifts and of his unfailing imaginative grasp of the lyric stage".[12]