Steven Pinker in Göttingen in 2010

Steven Arthur Pinker (born September 18, 1954) is a Canadian-American experimental psychologist, cognitive scientist, linguist and popular science author. He is a Harvard College Professor and the Johnstone Family Professor in the Department of Psychology at Harvard University[1] and is known for his advocacy of evolutionary psychology and the computational theory of mind.

Pinker’s academic specializations are visual cognition and psycholinguistics. His academic pursuits include experiments on mental imagery, shape recognition, visual attention, children's language development, regular and irregular phenomena in language, the neural bases of words and grammar, and the psychology of innuendo and euphemism. He published two technical books which proposed a general theory of language acquisition and applied it to children's learning of verbs. In his less academic books, he argued that language is an "instinct" or biological adaptation shaped by natural selection. On this point, he opposes Noam Chomsky and others who regard the human capacity for language to be the by-product of other adaptations. He is the author of six books for a general audience, which include The Language Instinct (1994), How the Mind Works (1997), Words and Rules (2000), The Blank Slate (2002), The Stuff of Thought (2007), and The Better Angels of Our Nature (2011).

Pinker was born in Montreal, Quebec, Canada, in 1954, and graduated from Dawson College in 1971. He received a BA degree in psychology at McGill University in 1976, and then went on to earn his PhD degree in experimental psychology at Harvard University in 1979. He did research at the Massachusetts Institute of Technology (MIT) for a year, after which he became an assistant professor at Harvard and then Stanford University. From 1982 until 2003, Pinker taught at the Department of Brain and Cognitive Sciences at MIT, and eventually became the director of the Center for Cognitive Neuroscience, taking a one-year sabbatical at the University of California, Santa Barbara, in 1995-6. As of 2008, he is the Johnstone Family Professor of Psychology at Harvard.[2] In June 2011 it was announced he would join the professoriate of New College of the Humanities, a private college in London.[3]

Pinker was named one of Time Magazine's 100 most influential scientists and thinkers in the world in 2004[4] and one of Prospect and Foreign Policy's 100 top public intellectuals in both years the poll was carried out, 2005[5] and 2008;[6] in 2010 he was named by Foreign Policy magazine to its list of top global thinkers.[7] His research in cognitive psychology has won the Early Career Award (1984) and Boyd McCandless Award (1986) from the American Psychological Association, the Troland Research Award (1993) from the National Academy of Sciences, the Henry Dale Prize (2004) from the Royal Institution of Great Britain, and the George Miller Prize (2010) from the Cognitive Neuroscience Society. He has also received honorary doctorates from the universities of Newcastle, Surrey, Tel Aviv, McGill, and the University of Tromsø, Norway. He was twice a finalist for the Pulitzer Prize, in 1998 and in 2003.

In January 2005, Pinker defended Lawrence Summers, President of Harvard University, whose comments about a gender gap in mathematics and science angered much of the faculty. Pinker noted that Summers's remarks, properly understood, could form the basis of a testable hypothesis. The remarks, Pinker said, claimed not that men are consistently smarter, but that there are "more idiots, [and] more geniuses" of the male gender.[8]

On May 13, 2006, Pinker received the American Humanist Association's Humanist of the Year award for his contributions to public understanding of human evolution.[9]

In 2009, Pinker wrote a highly critical review of Malcolm Gladwell's analytic methods in the New York Times.[10] Gladwell published a rebuttal in the Times regarding Pinker's comments about the importance of IQ on teaching performance and by analogy, the effect, if any, of draft order on quarterback performance in the National Football League. Pinker then responded to Gladwell's rebuttal.[11] The exchange prompted Advanced NFL Stats to step in and address the issue statistically, siding with Pinker in that draft order is indeed correlated with quarterback performance.[12]

Pinker also serves on the Advisory Board of Secular Coalition for America and offers advice to Executive Director Sean Faircloth and the entire coalition on the acceptance and inclusion of nontheism in American life. [13]

The Committee for Skeptical Inquiry lists Pinker as one of their fellows. [14]

In February 2010 he was named to the Freedom From Religion Foundation's Honorary Board of distinguished achievers.[15] Pinker appeared on the Colbert Report on 10/18/11.

His father, a lawyer, first worked as a manufacturer's representative, while his mother was first a home-maker then a guidance counselor and high-school vice-principal. He has two younger siblings. His brother is a policy analyst for the Canadian government. His sister, Susan Pinker, is a psychologist and writer, author of The Sexual Paradox.[16][17] Pinker married Nancy Etcoff in 1980 and they divorced in 1992; he married Ilavenil Subbiah in 1995 and they too divorced.[18] His current wife is the novelist and philosopher Rebecca Goldstein.[19] He has two stepdaughters: the novelist Yael Goldstein Love and the poet Danielle Blau.

He has said, "I was never religious in the theological sense... I never outgrew my conversion to atheism at 13, but at various times was a serious cultural Jew."[20] As a teenager, he says he considered himself an anarchist until he witnessed civil unrest following a police strike in 1969.[21] He has reported the result of a test of his political orientation that characterized him as "neither leftist nor rightist, more libertarian than authoritarian".[22] Pinker confesses to having "experienced a primitive tribal stirring" after his genes were shown to trace back to the Middle East.[23]

Theories of language and mind

Pinker is known within psychology for his theory of language acquisition, his research on the syntax, morphology, and meaning of verbs, and his criticism of connectionist (neural network) models of language. In The Language Instinct (1994) he popularized Noam Chomsky's work on language as an innate faculty of mind, with the twist that this faculty evolved by natural selection as a Darwinian adaptation for communication, although both ideas remain controversial (see below). He also defends the idea of a complex human nature which comprises many mental faculties that are adaptive (and is an ally of Daniel Dennett and Richard Dawkins in many evolutionary disputes). Another major theme in Pinker's theories is that human cognition works, in part, by combinatorial symbol-manipulation, not just associations among sensory features, as in many connectionist models.

Pinker's books, The Language Instinct, How the Mind Works, Words and Rules, The Blank Slate, and The Stuff of Thought combine cognitive science with behavioral genetics and evolutionary psychology. The Language Instinct has been criticized by Geoffrey Sampson in his book, The 'Language Instinct' Debate.[24] The assumptions underlying the nativist view have also been subject to sustained criticism in Jeffrey Elman's Rethinking Innateness: A Connectionist Perspective on Development (Neural Networks and Connectionist Modeling), which defends the connectionist approach that Pinker has criticized. 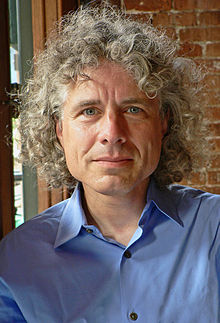