The Didaktik was a series of home computers based on the Intel 8080 and Zilog Z80 processors produced in former Czechoslovakia.

While Didaktik Alfa and Beta were mostly deployed in schools (to replace older PMD 85 computers), there was another production line, meant as home computers. These were Sinclair ZX Spectrum 48K clones. 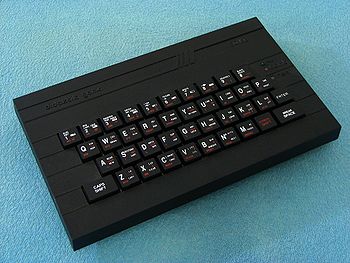 Didaktik Gama was the first clone of the ZX Spectrum with one speciality: 80 KiB RAM divided into two switched 32 KiB memory banks and 16 KiB of slower RAM containing graphical data for video output, while the size of ROM was 16 KiB. This computer had become an unreachable dream for many children and adults in former socialist Czechoslovakia as the computer was considerably expensive and seldom available to buy. It is said there were waiting lists several years long. The design of the computer was very simple — just a grey or black box the size of A5 with flat plastic keyboard and connectors mounted on the rear side. All games developed for the ZX Spectrum 48K were generally compatible with this computer. There is no need to say that it established massive and flourishing black market with these games country-wide as they were officially unavailable behind the "iron curtain". An audio cassette was used as the data store and a TV served as the monitor.

Didaktik Gama was produced in three variants: the first, Gama '87, fixed some bugs in the original ZX Spectrum ROM, thus breaking compatibility in some percentage of applications (read: games), and introduced its own bugs effectively inhibiting the use of the second 32 KiB memory bank from BASIC. Gama '88 fixed the original ZX Spectrum bugs in a more compatible way and fixed the memory switching bug. The last and the best model was Gama '89 which fixed some more bugs. Production of Didaktik Gama computers ceased in 1992. 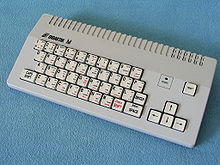 The next version, the Didaktik M introduced in 1990, was more advanced in design and reliability. The machine resembled more of a professional home computer with arrow keys separated from the rest of the keyboard and a more ergonomic shape of the case. Inside there was only 64 KiB of total memory (16 KiB ROM and 48 KiB RAM) which was a disappointment in comparison to the Gama. The computer was considerably redesigned. A custom circuit from Russian company Angstrem was used instead of the original ULA as a result the screen had a square aspect ratio instead of a rectangle 4:3. In addition the whole RAM was realized by one set of 64 KiB chips from which only 48 KiB were used and there was no difference between the fast and slow memory with the video content. There were two separated connectors for joysticks and one connector for additional interfaces, such as a printer interface. Unlike the previous version of Didaktik, these connectors were typical "socialistic solution" compatible with nothing that was then available in the ČSSR. Thus, users were forced to develop and produce various and sometimes funny home-made interfaces to satisfy their needs. Data storing and monitor type was the same as in the case of the Gama.

Two floppy disk drives were developed and released later to offer the possibility of fast saving/loading of various programs.

5.25" floppy disk drive called D40 was introduced in 1992 and featured a "Snapshot" (see also Hibernation (computing)) button that allowed to store current content of the memory (memory image) on diskette. It was also possible later to load the memory image and continue playing the game (or whatever was stored) from the respective state.

3.5" floppy disk drive called D80 was also introduced later in 1992 at the same time as Didaktik Kompakt was released.

The Didaktik Kompakt from 1992 was basically a Didaktik M with built-in floppy 3.5" 720 KiB drive and parallel printer port.

These computers were famous for their simplicity allowing people with little technical ability to produce various hardware add-ons such as FDD controllers, AD/DA converters or software (such as Desktop — unique WYSIWYG word processor with functions like proportional text, pictures in text support, block functions, multi-font support etc.). Both version of these computers had been produced in Skalica, Slovakia. Didaktik's glory went out with price fall of 16-bit computers, such as the Atari and Amiga, around the middle 90s until it was finally steam-rolled by the PC soon after.

The production of Didaktik computers stopped in the year 1994.