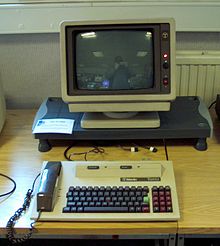 The One Per Desk, or OPD, was an innovative hybrid personal computer/telecommunications terminal based on the hardware of the Sinclair QL. The One Per Desk was built by International Computers Limited (ICL) and launched in the UK in 1984. It was the result of a collaborative project between ICL, Sinclair Research and British Telecom begun in 1981, originally intended to incorporate Sinclair's flat-screen CRT technology.

Rebadged versions of the OPD were sold in the United Kingdom as the Merlin Tonto and in Australia as the Telecom Australia Computerphone.

From the QL, the OPD borrowed the 68008 CPU, ZX8301/8302 ULAs, 128 KB of RAM and dual Microdrives (re-engineered by ICL for greater reliability) but not the 8049 Intelligent Peripheral Controller. Unique to the OPD was a "telephony module" incorporating an Intel 8051 microcontroller (which also controlled the keyboard), two PSTN lines and a V.21/V.23 modem, plus a built-in telephone handset and a TI TMS5220 speech synthesiser (for automatic answering of incoming calls). [1][2]

The OPD was supplied with either a 9-inch monochrome (white) monitor or a 14-inch colour monitor. Both monitors also housed the power supply for the OPD itself.

The Psion applications suite bundled with the QL was also ported to the OPD as Xchange and was available as an optional ROM pack.

An ICL supplied application was used to synchronise a national bingo game across hundreds of bingo halls in the UK. The integral V.23 dialup modem was used to provide remote communications to the central server.

Several UK ICL Mainframe (Series 39) customers, in Local Government and Ministry of Defence sectors, used statistics applications on OPD systems to view graphical representations of mainframe reports. Once again, the integral V.23 modem was used to download from the mainframe.

British Telecom Business Systems sold the OPD as the Merlin M1800 Tonto[3]. BT intended the Tonto to be a centralised desktop information system able to access online services, mainframes and other similar systems through the BT telephone network. It is said[who?] that the power supply unit was unreliable and often failed on most units. The Tonto retailed at £1,500 at launch. OPD peripherals and software ROM cartridges were also badged under the Merlin brand. BT withdrew support for the Tonto in February 1993. The name Tonto was derived from "The Outstanding New Telecoms Opportunity"[citation needed].