Mon State (Burmese: မွန်ပြည်နယ်, pronounced [mʊ̀ɴ pjìnɛ̀]; Mon: တြဳႝရးဍဳင္မန္၊ ရးမညေဒသ) is an administrative division of Myanmar. It is sandwiched between Kayin State on the east, the Andaman Sea on the west, Bago Region on the north and Tanintharyi Region on the south, and has a short border with Thailand's Kanchanaburi Province at its south-eastern tip. The land area is 12,155 km². Mon State includes many small islands along its 566 km of coastline. Its capital is Mawlamyaing.

Humans lived in the region that is now Myanmar as early as 11,000 years ago, but the first identifiable civilisation is that of the Mon. The Mon probably began migrating into the area eastward from eastern India in the period from 3000 BC to 1500 BC and settled in the Chao Phraya River basin of southern Thailand around the 6th century AD.[citation needed] The Mon moved westward into the Irrawaddy Delta of southern Myanmar in the ensuing centuries. Mon tradition holds that the Suwarnabhumi mentioned in the Edicts of Ashoka and the Dîpavamsa was their first kingdom (pronounced Suvanna Bhoum), founded around the port of Thaton in about 300 BC, however, this is disputed by scholars. Oral tradition suggests that they had contact with Buddhism via seafaring as early as the 3rd century BC, though definitely by the 2nd century BC when they received an envoy of monks from Ashoka, and the Mon converted to Theravada Buddhism sometime before the sixth century [1], and they adopted the Indian Pali script. Much of the Mon's written records have been destroyed through wars. The Mons blended Indian and Mon cultures together in a hybrid of the two civilisations. By 825 they had firmly established themselves in southern and southeastern Myanmar and founded the cities of Bago (Pegu) and Thaton, and by the mid-9th century, they had come to dominate all of southern Myanmar.

The first recorded kingdom that can undisputedly be attributed to the Mon was Dvaravati which prospered until around 1024 AD when their capital was sacked by the Khmer Empire and most of the inhabitants fled west to present-day Burma and eventually founded new kingdoms. These, too, eventually came under pressure from new ethnic groups arriving from the north.

Advent of the British

Lower Burma, including what is now Mon State, was conquered by Great Britain in 1824 after the First Anglo-Burmese War. The Mon assisted the British in the war, in return for promises of their own leadership after the defeat of Burma. Hundreds of thousands of Mons who had migrated into Siam returned to their homeland when it came under British rule. However, British promises to restore the Mon Kingdom were never fulfilled. During colonial times, Moulmein had a substantial Anglo-Burmese population; an area of the city was known as 'Little England' due to the large Anglo-Burmese community. However, nowadays this community has dwindled to a handful of families as most have left for the UK or Australia.

In 1947, the Mon sought self-determination from the yet unformed Union of Burma; however Burmese Prime Minister U Nu refused, saying that no separate national rights for the Mon should be contemplated. The Burmese army moved into areas claimed by the Mon nationalists and imposed rule by force which resulted in a civil war. Mon separatists formed the Mon Peoples Front, which was later superseded by the New Mon State Party (NMSP) in 1962. Since 1949, the eastern hills of the state (as well as portions of Thaninthaya Division) have been under control of the NMSP, and its military arm, the Mon National Liberation Front (MNLF). In addition to fighting the central government, the MNLF has also fought the Karen people over control of lucrative border crossings into Thailand.

In 1974, partially to assuage Mon separatist demands, the theoretically autonomous Mon State, was created out of portions of Thaninthayi Division and Bago Division. Resistance continued until 1995, when NMSP and SLORC agreed a cease-fire and in 1996, the Mon Unity League was founded. SLORC troops continued to operate in defiance of the agreement.  The human rights situation in Mon State has not improved. International organizations have repeatedly accused the Myanmar government for massive human rights violations in Mon State, including forced labor, arbitrary detention, population transfer, property confiscation, rape, etc. 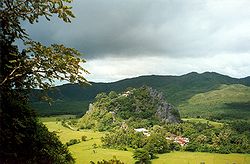 Although there are no modern figures on the population of Mon State, it is estimated that the population is around 2,466,000 or 8,466,000. The majority are Mon. However, there is a large number of ethnic Bamar, as well as members of the Kayin and Pa-O ethnic groups and a small, dwindling Anglo-Burmese community. Many are isolated and many do not understand or speak Burmese. There is a Thai Community in Kyaikkami. The majority of people are Buddhist.

Mon State has a tropical climate. It has temperate weather as it is located in the low latitude zone and near the sea. The state has only slight changes in temperature. The average temperature of Mawlamyine in January is 78°F (25.6°C) and in April is 85°F (29.4°C). Annual rainfall in Mawlamyine is 190 inches (4.8 m) and in Thaton is 217 inches (5.5 m). Rain is especially heavy in July and August.

Mon State has a cultivated area of nearly 4.5 million acres (18,000 km²), mostly under rice. The major secondary crop is rubber. Orchards and rubber plantations are found in the mountainous areas while Coastal fishing and related industries such as production of dried fish, fish sauce and agar-agar are in southern part, Ye district. Production of Betel nut is also a sustaining business of Mon state, as the Mon pheasants preserved their heredity land onwards along with the government regulations, however, there are some many parts of uncultivated crude land in the area closed to neighbour Karen state. Moreover, modern business development includes growing of cashew trees (acajoύ, in Portuguese), from which they collect the cashew nut for market elsewhere.

Mawlamyine Bridge looks un-modernized, but it's the longest bridge of Myanmar that serves the flow of the north-south economy.

Other industries include paper, sugar, rubber tires. Thaton has a major factory (Burmese, Ka-Sa-La) of rubber products run by Ministry of Industry (1). Forests cover approximately half of the area and timber production is one of the major contributors to the economy. Minerals extracted from the area include salt, antimony, and granite. Natural resources such as forest products, and onshore and offshore mineral resources, are exploited only by top Myanmar military leaders and foreign companies. At the present time one of the biggest foreign investments into Myanmar is for the exploitation of natural gas reserves in Mon State. The Yadana Gas project which connected pipelines alongside the towns of Mon state made harassed danger to the native Mon land and Mon people.

In Mudon, a city near Mawlamyaing, there is an applied research center for agricultural science with labouratory bases in rubber plantation and fertilization of some other species.

In the past during the socialist regime, the trading of Mon state was exceptional because the Mon business persons had fantastic deals with the foreign enterprises from Singapore, Malaysia and Thailand. Imports and exports of goods from and to that countries were made via seaports of Mawlamyaing, Ye and Thanbyuzayat district. Although it seemed to be unofficial trading in the past, it absolutely developed Mon State if compared to the decline economy of the current situation.

The future plans with tourism will benefit Mon state a lot as it has excellent transportation with the capital Rangoon. Transportation routes include Train, Bus, Sea line and Airlines. The newly opened Mawlamyaing Bridge gives quick access from southern Ye to North Bago and Rangoon by a day journey. Three Pagoda Pass is an alternative route which communicates Mon state with neighbour Kanchanaburi province of Thailand.

Mon state has a capital of Mawlamyaing, the third largest citiy in Myanmar. Administrative body is set under South Eastern Regional Command of Myanmar Army in Mawlamyine and Mawyawaddy Navy Command controls coastline security. There are dispersed army infantry battalions at many towns in Mon state, and Thaton has a Light Infantry Division (44th). Major districts are divided for example, Mawlamyaing, Thaton, and Ye districts. At present, army infantries are densely placed in the former neutral territory of Ye district for future plans. Ye has become the major city for Southern Mon State with Sector Operation Command of Air Defense, and Military Operations Command 19 based headquarters.

Cities and Towns and villages

Educational opportunities in Myanmar are extremely limited outside the main cities of Yangon and Mandalay. The following is a summary of the public school system in the state in the academic year 2002-2003.[2]

The general state of health care in Myanmar is poor. The military government spends anywhere from 0.5% to 3% of the country's GDP on health care, consistently ranking among the lowest in the world.[3][4] Although health care is nominally free, in reality, patients have to pay for medicine and treatment, even in public clinics and hospitals. Public hospitals lack many of the basic facilities and equipment. The following is a summary of the public health system in the state, in the fiscal year 2002-2003.[5]

Even by the low standards of Myanmar, the available health services in Mon State are shockingly low. A state of 2.5 million people has less than 1000 hospital beds. 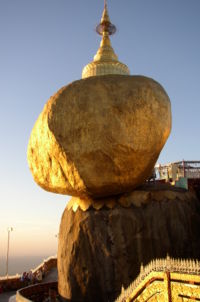