André Malraux (pronounced: [ɑ̃dʁe malʁo]) DSO (3 November 1901 – 23 November 1976) was a French adventurer, award-winning author, and statesman. Having traveled extensively in Indochina and China, Malraux was noted especially for his novel entitled La Condition Humaine (Man's Fate) (1933), which won the Prix Goncourt. He was appointed by General Charles de Gaulle as Minister of Information (1945–1946), then as Minister of State (1958–1959), and the first Minister of Cultural Affairs, serving during De Gaulle's entire presidency (1959–1969).

Malraux was born in Paris in 1901, the son of Fernand-Georges Malraux and Berthe Lamy (Malraux). His parents separated in 1905 and eventually divorced. There are suggestions that Malraux's paternal grandfather committed suicide in 1909.[1]

Malraux was raised by his mother, maternal aunt Marie and maternal grandmother, Adrienne Lamy-Romagna, who had a grocery store in the small town of Bondy.[1][2] His father, a stockbroker, committed suicide in 1930 after the international crash of the stock market and onset of the Great Depression.[3] From his childhood, associates noticed that Andre had marked nervousness and motor and vocal tics. The recent biographer Olivier Todd, who published a book on Malraux in 2005, suggests that he had Tourette's syndrome, although that has not been confirmed.[4] Either way, most critics have not seen this as a significant factor in Malraux's life or literary works.

The young Malraux left formal education early, but he followed his curiosity through the booksellers and museums in Paris, and explored its rich libraries as well.

In 1922, Malraux married Clara Goldschmidt. Malraux and his first wife separated in 1938 but didn't divorce before 1947. His daughter from this marriage, Florence (b.1933), married the filmmaker Alain Resnais.[5]

While still married to Clara, Malraux had a liaison with journalist and novelist Josette Clotis, starting in 1933. Malraux and Josette had two sons: Pierre-Gauthier (1940–1961) and Vincent (1943–1961). During 1944, while Malraux was fighting in Alsace, Josette died, aged 34, when she slipped while boarding a train. His two sons died together in 1961 in an automobile accident.

In 1948, Malraux married a second time, to Marie-Madeleine Lioux, a concert pianist and the widow of his half-brother, Roland Malraux. They separated in 1966. Born in the family château at Verrières-le-Buisson, Essonne, a suburb southwest of Paris, she was heir to a great French seed company fortune, that of Vilmorin. She was afflicted with a slight limp that became a personal trademark. Vilmorin was best known as a writer of delicate but mordant tales, often set in aristocratic or artistic milieu. Her most famous novel was Madame de..., published in 1951, which was adapted into the celebrated film The Earrings of Madame de... (1953), directed by Max Ophüls and starring Charles Boyer, Danielle Darrieux and Vittorio de Sica. Vilmorin's other works included Juliette, La lettre dans un taxi, Les belles amours, Saintes-Unefois, and Intimités. Her letters to Jean Cocteau were published after the death of both correspondents.

André Malraux, then French Cultural Affairs Minister , was the lover of Louise de Vilmorin- ( for the last years of her life, until she she died in 1969) She called herself "Marilyn Malraux".Louise de Vilmorin , was the owner of the Chateau de Vilmorin, located next to Verrieres-Le Buisson, where Andre Malraux was buried in 1976-

As a young man, Malraux began writing for the magazine Action. He worked as an editor for the publisher Simon Kra, who produced "limited edition" books, which were popularly considered an investment against inflation. Some of these books included Marquis de Sade's Les Amis de crime, and Le Bordel de Venise.[6]

At the age of 21, Malraux left for Cambodia with Clara.[7] There he undertook an exploratory expedition into the Cambodian jungle. On his return he was arrested by French colonial authorities for removing bas-reliefs from Banteay Srei, a Khmer temple. Malraux later used the episode in his second novel La Voie Royale.

His experiences and observations while in Indochina led to Malraux's becoming highly critical of the French colonial authorities. In 1925, he helped to organize the Young Annam League and founded a newspaper L'Indochine.[8]

On his return to France, he published The Temptation of the West (1926). It was in the form of an exchange of letters between a Westerner and an Asian, comparing aspects of the two cultures. This was followed by his first novel The Conquerors (1928), then by The Royal Way (1930) which was influenced by his Cambodian experience.[9] In 1933 he published Man's Fate (La Condition Humaine). The novel about the 1927 failed Communist rebellion in Shanghai was written with obvious sympathy for the Communists; Malraux was awarded the 1933 Prix Goncourt for this work.[10]

During the 1930s, Malraux was active in the anti-fascist Popular Front in France. At the beginning of the Spanish Civil War he joined the Republican forces in Spain, serving in and helping to organize the small Spanish Republican Air Force.[11] His Squadron España, became something of a legend after his claims of nearly annihilating part of the Nationalist army at Medellín. (According to Curtis Cate, his biographer, he was slightly wounded twice during efforts to stop the Falangists' takeover of Madrid, but the historian Hugh Thomas denies this.)

The French government sent aircraft to Republican forces in Spain, but they were already obsolete by the standards of 1936. They were mainly Potez 540 bombers and Dewoitine D.372 fighters. The slow Potez 540 rarely survived three months of air missions, moving some 80 knots against enemy fighters flying at more than 250 knots. Few of the fighters proved to be airworthy, and were delivered intentionally without guns or gun-sights. The French Ministry of Defense had feared that modern types of planes would easily be captured by the Germans fighting for Franco, and the lesser models were a way of maintaining official "neutrality".[12] The planes were surpassed by more modern types introduced by the end of 1936 on both sides.

The Republic government circulated photos of Malraux's standing next to some Potez 540 bombers suggesting that France was on their side, at a time when France and the United Kingdom had declared official neutrality. Malraux himself was not a pilot, and never claimed to be one, although he was given the title of the Squadron Leader of 'Espana'. His commitment to the Republicans was personal, like that of many other foreign volunteers. There was never any suggestion that he was there at the behest of the French Government. Aware of the Republicans' inferior armaments, of which outdated aircraft were just one example, he toured the United States to raise funds for the cause. In 1938 he published L'Espoir (Man's Hope), a novel influenced by his Spanish war experiences.[13]

Malraux has occasionally been criticized by opponents for his involvement or motivations in the Spanish Civil War. Comintern sources, for example, described him as an 'adventurer'.[14] and Antony Beevor writes: "Malraux stands out, not just because he was a mythomaniac in his claims of martial heroism – in Spain and later in the French Resistance – but because he cynically exploited the opportunity for intellectual heroism in the legend of the Spanish Republic."[15]

Other biographical sources, including fellow combatants, contradict these opinions and praise Malraux's leadership and sense of camaraderie. Here as elsewhere, Malraux's participation in major historical events inevitably brought him determined adversaries as well as strong supporters, and the resulting polarization of opinion has colored, and rendered questionable, much that has been written about his life.[16] Comintern records, for instance, are a questionable source since Malraux had been critical of some Stalinist policies. Beevor's reference to "claims of martial heroism" is also dubious since although Malraux's books sometimes describe military action, he never presents his own role as especially heroic.

At the beginning of the Second World War, Malraux joined the French Army. He was captured in 1940 during the Battle of France, but he escaped and later joined the French Resistance.[17] In 1944 he was captured by the Gestapo.[18] He later commanded the tank unit Brigade Alsace-Lorraine in defence of Strasbourg and in the attack on Stuttgart.[19]

After the war, Malraux was awarded the Médaille de la Résistance and the Croix de guerre. The British awarded him the Distinguished Service Order, for his work with British liaison officers in Corrèze, Dordogne and Lot. After Dordogne was liberated, Malraux led a battalion of former resistance fighters to Alsace-Lorraine, where they fought alongside the First Army.[20]

During the war he worked on his last work in novel form, The Struggle with the Angel, the title drawn from the story of the Biblical Jacob. The manuscript was destroyed by the Gestapo after his capture in 1944. A surviving first section, titled The Walnut Trees of Altenburg, was published after the war. 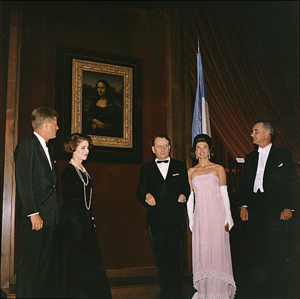 After the war, General Charles de Gaulle appointed Malraux as his Minister for Information (1945–1946). Malraux began work on the first of his books on art, The Psychology of Art, published in three volumes (1947–1949). The work was subsequently revised and republished in one volume as The Voices of Silence (Les Voix du Silence).

Malraux was appointed Minister of State in De Gaulle's 1958–1959 government, and France's first Minister of Cultural Affairs. He served De Gaulle during his entire presidency (1959–1969).[4] Among many other initiatives, he launched a then-innovative (and subsequently widely-imitated) program to clean the blackened facades of notable French buildings, revealing the natural stone underneath.[22] He also created maisons de la culture in a number of provincial cities and worked to preserve France's national heritage.

In 1960 Malraux worked as editor on the series Arts of Mankind, an ambitious survey of world art that generated more than thirty large, illustrated volumes. During the 1960s, Malraux published the first volume of a trilogy on art entitled The Metamorphosis of the Gods; the second two volumes (not yet translated into English) were published shortly before he died.

He also began publishing a series of semi-autobiographical works, the first of which was Antimémoires (1967). One of these, Lazarus, is a reflection on death after he suffered a serious illness. La Tete d'obsidienne (1974) (translated as Picasso's Mask) concerns Picasso, and visual art more generally.

Malraux died in Créteil, near Paris, on 23 November 1976. He was buried in the Verrières-le-Buisson (Essonne) cemetery. In honor of his contributions to French culture, his ashes were moved to the Panthéon in Paris during 1996, on the twentieth anniversary of his passing.

Malraux's novels, especially La Condition Humaine, are very impressive; his Antimemoirs (the series as a whole is entitled Miroir des limbes (Mirror of Limbo) are equally fascinating. His works on the theory of art, such as The Voices of Silence, contain a revolutionary approach to art that challenges the Enlightenment aesthetics tradition and views art as much more than a source of "aesthetic pleasure". As the French writer André Brincourt comments, Malraux's books on art have been "skimmed a lot but very little read."[23] As a result, critical commentary has often oversimplified and distorted their arguments.

‘The artist is not the transcriber of the world, he is its rival.’ Malraux, L'Intemporel (3rd volume of The Metamorphosis of the Gods.)

'In a world in which everything is subject to the passing of time, art alone is both subject to time and yet victorious over it'. Malraux in a television program about art, 1975.

"Art is an object lesson for the gods." The Voices of Silence

"The art museum is one of the places that give us the highest idea of man." The Voices of Silence

"Humanism does not consist in saying: ‘No animal could have done what I have done,’ but in declaring: ‘We have refused what the beast within us willed to do, and we seek to reclaim man wherever we find that which crushes him.’" The Voices of Silence

"The greatest mystery is not that we have been flung at random between this profusion of matter and the stars, but that within this prison we can draw from ourselves images powerful enough to deny our nothingness." Les Noyers de l'Altenburg

For a more complete biography, see the site of the Amitiés internationales André Malraux.

Selected bibliography of works about Malraux

This article incorporates information from the revision as of 2010-02-5 of the equivalent article on the French Wikipedia.