The National Gallery of Art and its Sculpture Garden is a national art museum, located on the National Mall between 3rd and 9th Streets at Constitution Avenue NW, in Washington, DC. Open to the public, free of charge, the museum was established in 1937 for the people of the United States of America by a joint resolution of the United States Congress, with funds for construction and a substantial art collection donated by Andrew W. Mellon. Additionally, the core collection has major works of art donated by Paul Mellon, Ailsa Mellon Bruce, Lessing J. Rosenwald, Samuel Henry Kress, Rush Harrison Kress, Peter Arrell Brown Widener, Joseph E. Widener and Chester Dale. The Gallery's collection of paintings, drawings, prints, photographs, sculpture, medals, and decorative arts traces the development of Western Art from the Middle Ages to the present, including the only painting by Leonardo da Vinci in the Americas and the largest mobile ever created by Alexander Calder.

The Gallery's campus includes the original neoclassical West Building designed by John Russell Pope, which is linked underground to the modern East Building designed by I. M. Pei, and the 6.1-acre (25,000 m2) Sculpture Garden. Temporary special exhibitions spanning the world and the history of art are presented frequently.

Financier Andrew W. Mellon began gathering a private collection of old master paintings and sculptures during the First World War, but in the late 1920s he decided to direct his collecting efforts, secretly, towards the establishment of a new national gallery for the United States. This intent was confirmed in 1930 by the formation of the A. W. Mellon Educational and Charitable Trust, which was to be the legal owner of works intended for the gallery. In 1930-1931, the Trust made its first major acquisition, 21 paintings from the Hermitage Museum in St. Petersburg, including such masterpieces as Raphael's Alba Madonna and Jan van Eyck's The Annunciation. In 1929 Mellon had initiated contact with the recently-appointed Secretary of the Smithsonian Institution, Charles Greeley Abbot, and in 1931 he was appointed a Commissioner of the Institution's National Gallery of Art. When the director of the Gallery retired, Mellon requested Abbot not to appoint a successor, because he proposed to endow a new building, with funds for expansion of the collections, which would, in effect, be a rebirth of the Gallery. However, his trial for tax evasion, centering on the Trust and the Hermitage paintings, caused the plan to be modified, and in 1935 he announced, in the Washington Star, his intention to establish a new gallery for old masters, separate from the Smithsonian. When quizzed by Abbot, he explained that the project was now entirely in the hands of the Trust- also that their decisions were partly dependent on "the attitude of the Government towards the gift". Eventually, in January 1937, Mellon formally offered to create the new Gallery, and on his birthday, 24 March 1937, an Act of Congress accepted the collection and building funds (provided through the Trust), and approved the construction of a museum on the National Mall. The new gallery was to be effectively self-governing, not controlled by the Smithsonian, but took the old name "National Gallery of Art" while the Smithsonian's gallery would be renamed the "National Collection of Fine Art" (now the Smithsonian American Art Museum).[2][3][4]

Designed by architect John Russell Pope (who would go on to design the Jefferson Memorial), the new structure was completed and accepted by President Franklin D. Roosevelt on behalf of the American people on March 17, 1941. Neither Mellon nor Pope lived to see the museum completed; both died in late August 1937, only two months after excavation had begun. At the time of its inception it was the largest marble structure in the world. The museum stands on the former site of the Sixth Street railway station, most famous for being where 20th president James Garfield was shot in 1881 by a disgruntled office seeker.[5]

The Gallery's East Building was constructed in the 1970s on much of the remaining land left over from the original congressional joint resolution. It was funded by Mellon's children Paul Mellon and Ailsa Mellon Bruce. Designed by famed architect I.M. Pei, the contemporary structure was completed in 1978, and was opened on June 1 of that year by President Jimmy Carter. The new building was built to house the Museum's collection of modern paintings, drawings, sculptures, and prints, as well as study and research centers and offices. The design received a National Honor Award from the American Institute of Architects in 1981.

The final addition to the complex is the National Gallery of Art Sculpture Garden. Completed and opened to the public on May 23, 1999, the location provides an outdoor setting for exhibiting a number of pieces from the Museum's contemporary sculpture collection.

"East Building" redirects here. It is not to be confused with Eastern Building. 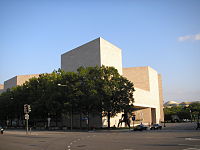 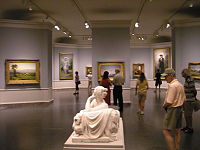 Exhibitions in the West Building

Exhibitions in the East Building

Two buildings comprise the museum: the West Building (1941) and the East Building (1978) linked by a spacious underground passage. The West Building, composed of pink Tennessee marble, was designed in 1937 by architect John Russell Pope in a neoclassical style (as is Pope's other notable Washington, D.C. building, the Jefferson Memorial). Designed in the form of an elongated H, the building is centered on a domed rotunda modeled on the interior of the Pantheon in Rome. Extending east and west from the rotunda, a pair of high, skylit sculpture halls provide its main circulation spine. Bright garden courts provide a counterpoint to the long main axis of the building.

The West Building has an extensive collection of paintings and sculptures by European masters from the medieval period through the late 19th century, as well as pre-20th century works by American artists. Highlights of the collection include many paintings by Jan Vermeer, Rembrandt van Rijn, Claude Monet, Vincent van Gogh, and Leonardo da Vinci.

In contrast, the design of the East Building by architect I. M. Pei is rigorously geometrical, dividing the trapezoidal shape of the site into two triangles: one isosceles and the other a smaller right triangle. The space defined by the isosceles triangle came to house the museum's public functions. That outlined by the right triangle became the study center. The triangles in turn became the building's organized motif, echoed and repeated in every dimension. The building's most dramatic feature is its high atrium designed as an open interior court, it is enclosed by a sculptural space frame spanning 16,000 square feet (1,500 m2). The atrium is centered on the same axis that forms the circulation spine for the West Building and constructed in the same Tennessee marble.[6] Starting in 2005, the joints attaching the marble panels to the walls began to show signs of strain, creating a risk of panels falling off the building onto the public below. In 2008 officials decided that it would be necessary to remove and reinstall all the panels. The project is scheduled for completion in 2013.[7]

The East Building focuses on modern and contemporary art, with a collection including works by Pablo Picasso, Henri Matisse, Jackson Pollock, Andy Warhol, Roy Lichtenstein and Alexander Calder. The East Building also contains the main offices of the NGA and a large research facility, Center for Advanced Study in the Visual Arts (CASVA).

The two buildings are connected by a walkway beneath 4th street, called "the Concourse" on the museum's map. In 2008, the National Gallery of Art commissioned American artist Leo Villareal to transform the Concourse into an artistic installation. Today, Multiverse is the largest and most complex light sculpture by Villareal featuring approximately 41,000 computer-programmed LED nodes that run through channels along the entire 200-foot (61 m)-long space.[8] The concourse also includes the food court and a gift shop.

The final element of the National Gallery of Art complex, the Sculpture Garden was completed in 1999 after more than 30 years of planning. To the west of the West Building, across Seventh Street, the 6.1 acres (25,000 m²) Sculpture Garden was designed by landscape architect Laurie Olin as an outdoor gallery for monumental modern sculpture and includes plantings of native American species of canopy trees, flowering trees, shrubs, ground covers, and perennials. A circular reflecting pool and fountain form the center of its design, complemented by great arching pathways of granite and crushed stone. (The pool is transformed into an ice-skating rink during the winter) The exhibited sculptures in the surrounding landscaped area include pieces by Roy Lichtenstein, Sol LeWitt, Roxy Paine, Joan Miró, Louise Bourgeois, and Hector Guimard.[9]

The National Gallery of Art is supported through a private-public partnership. The United States federal government provides funds, through annual appropriations, to support the museum's operations and maintenance. All artwork, as well as special programs, are provided through private donations and funds. The museum is not part of the Smithsonian Institution.

Entry to both buildings of the National Gallery of Art is free of charge. From Monday through Saturday, the museum is open from 10 a.m. – 5 p.m.; it is open from 11 – 6 p.m. on Sundays. It is closed on December 25 and January 1.

The National Gallery of Art has one of the finest art collections in the world. It was created for the people of the United States of America by a joint resolution of Congress accepting the gift of financier, public servant, and art collector Andrew W. Mellon in 1937. European and American paintings, sculpture, works on paper, photographs, and decorative arts are displayed in the collection galleries and Sculpture Garden. The permanent collection of paintings spans from the Middle Ages to the present day. The strongest collection is the Italian Renaissance collection, which includes two panels from Duccio's Maesta, the great tondo of the Adoration of the Magi by Fra Angelico and Filippo Lippi, a Botticelli on the same subject, Giorgione's Allendale Nativity, Giovanni Bellini's The Feast of the Gods, the only Leonardo da Vinci painting in the Americas, Ginevra de' Benci; and significant groups of works by Titian and Raphael. However, the other European collections include examples of the work of many of the great masters of western painting, including an important version of Saint Martin and the Beggar, by El Greco, and works by Matthias Grünewald, Cranach the Elder, Rogier Van der Weyden, Albrecht Dürer, Frans Hals, Rembrandt, Johannes Vermeer, Francisco Goya, Jean Auguste Dominique Ingres, and Eugène Delacroix, among others. The collection of sculpture and decorative arts is admittedly not quite as rich as this, but includes such works as the Chalice of Abbot Suger of St-Denis and a superb collection of work by Auguste Rodin and Edgar Degas. Other highlights of the permanent collection include the second of the two original sets of Thomas Cole's famous series of paintings titled The Voyage of Life, (the first set is at the Munson-Williams-Proctor Arts Institute in Utica, New York) and the original version of Watson and the Shark by John Singleton Copley (two other versions are in the Museum of Fine Arts, Boston and the Detroit Institute of Arts).

Highlights from the collection 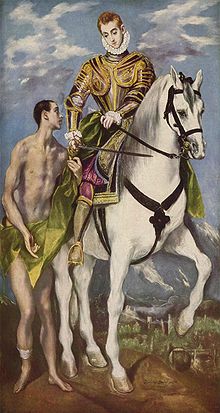 Selected highlights from the American collection