The Dornier Do X was the largest, heaviest, and most powerful flying boat in the world when it was produced by the Dornier company of Germany in 1929. First conceived by Dr. Claudius Dornier in 1924,[1] planning started in late 1925 and after over 240,000 work hours it was completed in June 1929.[2] Only the Tupolev ANT-20 Maxim Gorki Russian landplane of a few years later was physically larger between the two World Wars, but was not as heavy as the Do X, at 53 metric tons maximum takeoff weight versus the Do X's 56 tonnes.

The Do X was financed by the German Transport Ministry and built in a specially designed plant at Altenrhein,[1] on the Swiss portion of Lake Constance, in order to circumvent the Treaty of Versailles which forbade any aircraft exceeding set speed and range limits to be built in Germany after World War I.

While the type was popular with the public, a lack of commercial interest and a number of non-fatal accidents prevented more than three examples from being built. 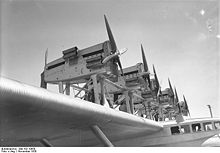 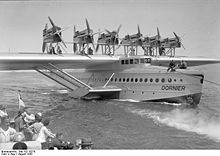 Do X under tow

The Do X is a semi-cantilever monoplane.[3] The Do X had an all-duralumin hull, with wings composed of a steel-reinforced duralumin framework covered in heavy linen fabric, covered with aluminum paint.

It was initially powered by twelve 391 kW (524 hp) Siemens-built Bristol Jupiter radial engines (six tractor propellers and six pushers), mounted in six tower nacelles on the wing. The nacelles are joined by an auxiliary wing whose purpose was to stabilize the mountings.[4] The air-cooled Jupiter engines were prone to overheating and proved to only be able to lift the Do X to an altitude of 425 m (1,400 ft). The engines were supervised by an engineer, who also controlled the throttle. The pilot would ask the engineer to adjust the power, in a manner similar to that used on maritime vessels.[5] After completing 103 flights in 1930, the Do X was refitted with 455 kW (610 hp) Curtiss Conqueror water-cooled 12-cylinder inline engines. Only then was it able to reach the altitude of 500 m (1,650 ft) necessary to cross the Atlantic. Dr. Dornier designed the flying boat to carry 66 passengers long distance or 100 on shorter flights.

The luxurious passenger accommodation approached the standards of transatlantic liners. On the main deck was a smoking room with its own wet bar, a dining salon, and seating for the 66 passengers which could also be converted to sleeping berths for night flights. Aft of the passenger spaces was an all-electric galley, lavatories, and cargo hold. The cockpit, navigational office, engine control and radio rooms were on the upper deck. The lower deck held fuel tanks and nine watertight compartments, only seven of which were needed to provide full flotation. 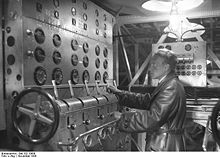 The Flugschiff (flying ship), as it was called, was launched for its first test flight on 12 July 1929,[6] with a crew of 14.[1] In order to satisfy skeptics, on its 70th test flight on 21 October there were 169 souls on board;[6][1] 150 passengers (mostly production workers and their families, and a few journalists), 10 aircrew and 9 "stowaways", who did not hold tickets. The flight broke the then world record for the number of persons carried on a single flight, a record that was not broken for another 20 years.[7] After a takeoff run of 50 seconds[6] the Do X slowly climbed to an altitude of only 200 m (650 ft). As a result of the ship's size, passengers were asked to crowd together on one side or the other to help make turns. It flew for 40 minutes[1] (Flug Revue claims it was the 42nd flight and lasted 53 minutes,[6] and historical film shows "fliegt mit 170 personen"[8]) at a maximum speed of 170 km/h (105 mph) before finally landing on Lake Constance.

To introduce the airliner to the potential United States market[1] the Do X took off from Friedrichshafen, Germany on 3 November 1930, under the command of Friedrich Christiansen for a transatlantic test flight to New York.[1] The route took the Do X to the Netherlands, England, France, Spain, and Portugal. The journey was interrupted at Lisbon on 29 November, when a tarpaulin made contact with a hot exhaust pipe and started a fire that consumed most of the port side wing.[6] After sitting in Lisbon harbor for six weeks while new parts were fabricated and the damage repaired, the flying boat continued (with several further mishaps and delays) along the Western coast of Africa and by 5 June 1931 had reached the Capverdian Islands, from which it crossed the ocean to Natal in Brazil,[6] where the crew were greeted as heroes by the local German émigré communities.

The flight continued north to the United States, finally reaching New York on 27 August 1931,[6] almost nine months after departing Friedrichshafen.[1] The Do X and crew spent the next nine months there as its engines were overhauled, and thousands of sightseers made the trip to Glenn Curtiss Airport (now LaGuardia Airport) to tour the leviathan of the air. The economic effects of the Great Depression dashed Dornier's marketing plans for the Do X, however, and it departed from New York on May 21, 1932 via Newfoundland and the Azores to Müggelsee, Berlin where it arrived on 24 May and was met by a cheering crowd of 200,000.[1]

Germany's original Do X was turned over to Deutsche Luft Hansa, the national airline at that time, after the financially strapped Dornier Company could no longer operate it. After a successful 1932 tour of German coastal cities, Luft Hansa planned a Do X flight to Vienna, Budapest, and Istanbul for 1933. The voyage ended after nine days when the flying boat's tail section tore off during a botched, over-steep landing on a reservoir lake near the city of Passau.[1] While the fiasco was successfully covered up and the Do X was repaired, it was then flown to Berlin,[clarification needed] where it became the centerpiece of Germany's new aviation museum Deutsche Luftfahrt-Sammlung at Lehrter Bahnhof, opened in 1936.[9]

The Do X remained an exhibit until it was destroyed in an RAF air raid during World War II on the night of 23-24 November 1943, by 383 aircraft - 365 Lancasters, 10 Halifaxes, and 8 Mosquitos.[10] Fragments of the torn off tail section are on display at the Dornier Museum in Friedrichshafen. While never a commercial success, the Dornier Do X was the largest heavier-than-air aircraft of its time, a pioneer in demonstrating the potential of an international passenger air service. A successor, the Do-XX, was envisioned by Dornier, but never advanced beyond the design study stage.

Three Do Xs were constructed in total: the original operated by Dornier, and two other machines based on orders from Italy — the X2, named Umberto Maddalena, and X3, named Alessandro Guidoni (X2 was originally named I-REDI). The Italian variants were essentially identical to the original with the exception of being slightly larger and the powerplant and engine mounts.[11] Dornier claimed the X2 was the largest aircraft in the world at that time. Each was powered by Fiat A-22R V12 water-cooled engines, with the six engine mounts being covered by a streamlined fairing. The Do X2 entered service in August 1931, and the X3 followed in May, 1932. Both ships were based at the seaplane station at La Spezia, on the Ligurian Sea.

Italy's Do X3 Alessandro Guidoni, one of the three Do Xs built.

Both orders originated with SANA, then the Italian state airline, but were requisitioned and used by the Italian Air Force primarily for prestige flights and public spectacles. After plans for a first-class passenger service (Genoa-Gibraltar) were deemed unfeasible, the X2 and X3 may have been used for training and transport flights.