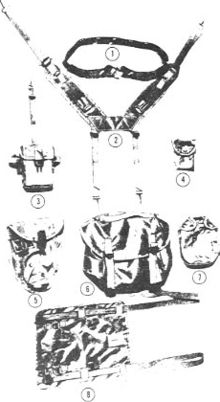 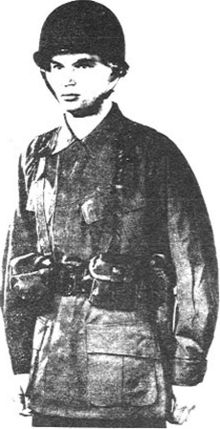 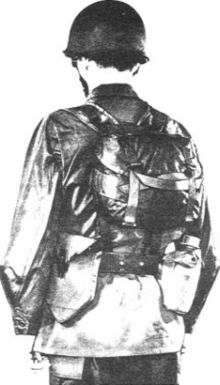 The United States Army entered the conflict in Southeast Asia with the canvas and cotton duck M-1956 Load-Carrying Equipment (LCE). Developed in the early 1950s, the LCE was designed for use with all small arms then in service with the Army. Deficiencies with the LCE were immediately realized once fielded in the tropical climates of Vietnam. Canvas, cotton duck and webbing, even when treated to prevent mildew, is still affected by it, along with dry rot due to constant wetting and drying. Cotton also absorbed a great deal of water, adding to its weight, and was slow drying; it also withstood abrasion poorly.

As with just about everything else in use in Vietnam by the Army, from boots to field dressings to ammunition packaging, the design of load-carrying equipment was also changed in an effort to provide lightweight individual equipment that could better withstand the rigours of a tropical environment.

Nylon duck and webbing proved to be lightweight, unaffected by mildew, fast-drying as it absorbed little water, and resisted abrasion well. It did have limitations; it was shiny when new; being somewhat stiff, it made a rustling noise against vegetation; and it melted when exposed to high heat.

The M-1967 Modernized Load-Carrying Equipment (MLCE), initially termed Lightweight Load-Carrying Equipment (LLCE), was developed specifically for use in Southeast Asia. Its issue began in 1968, but never fully replaced the LCE nor was it issued in complete sets. The MLCE consisted essentially of the same items of similar design as the LCE, but substituted nylon for cotton, and aluminium and plastic for steel and brass hardware where possible.

Nylon's light weight and durable qualities led the United States Army to consider the MLCE for Army-wide adoption. A study was undertaken in the early 1970s to identify any shortcomings and to propose improvements for a new load-carrying equipment system to replace the LCE and MLCE.

The MLCE continued to serve the Army well into the 1970s until replaced by the ALICE.

The M-1967 MLCE has the following components:

The following individual equipment items are issued alongside the M-1967 MLCE:

In 1969 a new version of the Case, Small Arms Ammunition is introduced for use with the 30-round cartridge magazine for the Rifle, 5.56 Millimeter, M16A1:

NOTE: all component items that utilize snap fasteners for closure have plastic snaps. After 1969 these are replaced with metal versions.