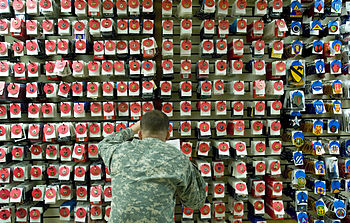 A Distinctive Unit Insignia (DUI) is a metal heraldic device worn by soldiers in the United States Army. The DUI design is derived from the coat of arms authorized for a unit. DUIs may also be called "distinctive insignia" (DI), a "crest" or a "unit crest" by soldiers or collectors, though the term "crest" may be misleading, as the device represents a coat of arms rather than a heraldic crest (which term properly refers to the portion of an achievement of arms which stands atop the helmet over the shield of arms). The U.S. Army Institute of Heraldry is responsible for the design, development and authorization of all DUIs.

The Distinctive Unit Insignia of the unit to which the soldier is assigned are worn as follows:

Pre-World War I Insignia. Distinctive ornamentation of a design desired by the organization was authorized for wear on the Mess Jacket uniform by designated organizations (staff corps, departments, corps of artillery, and infantry and cavalry regiments) per General Order 132 dated December 31, 1902. The distinctive ornamentation was described later as coats of arms, pins and devices. The authority continued until omitted in the Army uniform regulation dated December 26, 1911.

Coat of Arms Authorized. Coats of Arms for display on organizational flags was authorized by change 92, para 229, War Department, dated August 18, 1919. War Department Circular 527 dated November 25, 1919, expanded on the use of the coat of arms by stating the following: "Another advantage in this is the fact that these same devices will be suitable for use in other ways, to bring the regimental history home to every member; for example, on stationery, on pins, watch charms, etc., for civilian clothes; on tablets for headquarters, mess rooms, hop rooms, etc., possibly on the white mess jacket, all of which should promote esprit de corps." Change 105 to Army Regulations dated June 3, 1920, required the coat of arms or badge be placed on the organizational standard or color in lieu of shield and crest of the United States. Circular 527, dated November 25, 1919, stated that organizations that had coats of arms should submit them for approval and regiments that did not have a coat of arms should design a coat of arms or a badge and submit for approval.

Distinctive Unit Insignia. Circular 161 dated 29 April 1920 authorized the use of the regimental coat of arms or badge as approved by the War Department for wear on the collar of the white uniform and the lapels of the mess jacket. Circular 244, 1921 states: "It has been approved, in principle, that regiments of the Regular Army and National Guard may wear distinctive badges or trimmings on their uniforms as a means of promoting esprit de corps and keeping alive historical traditions. Various organizations which carry colors or standards have generally submitted coats of arms having certain historical significance. As fast as approved these coats of arms will for the basis for regimental colors or standards which will eventually replace the present regimental colors or standards when these wear out. The use of these coats of arms as collar ornaments in lieu of the insignia of corps, departments, or arms of service would be an example of distinctive badge to be worn by the regiment." `The first unit to wear this insignia was the 51st Artillery which received approval for wear on March 18, 1922. It was designed by Master Gunner and Master Sergeant Edward C. Kuhn, the artist responsible for creating all authorized coats of arms and distinctive unit insignia at the time. 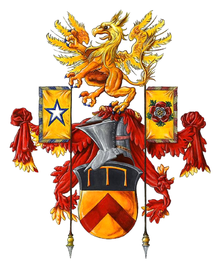 The United States Army Institute of Heraldry, which is the only official heraldic authority of the United States, furnishes heraldic services to the Armed Forces, including the research, design, development, standardization and quality control of insignia and badges.

The unit commanding officer requests approval of a distinctive unit insignia. A check is made by the Institute of Heraldry to determine the availability of a current copy of the lineage and honor statement and/or history for the unit. If such is not available, one is requested from the United States Army Center of Military History. The unit's history is reviewed to determine if the unit may inherit a previously approved distinctive unit insignia or if a new design should be made.

If a new design is to be made, careful study is made of the history and battle honors of the unit. The most important decorations, honors, combat service and missions are represented in the design of the insignia. Sometimes two centuries of history are condensed into symbolism for distinctive unit insignia.

A proposed design is created and sent to the commanding officer for review and concurrence. Upon concurrence by the unit commander an official letter of approval of the distinctive unit insignia is sent to the unit.

Once a distinctive unit insignia is approved it is changed only when a heraldic or historical error is found.

The shield shape design is used to identify color bearing organizations (for example, regiments and battalions). Other design patterns will be used for non-color bearing units. The design is based on war service, assignment or accomplishments. Cartoon characters or logos are not authorized as design elements. Symbols are to represent mission rather than actual equipment as equipment becomes out-of-date. Unit designations, numerals, letters, geographical outlines, reproductions of other insignia will not be included as part of the design.

When a DUI is authorized, all personnel assigned to the organization wear the insignia, except general officers, the Sergeant Major of the Army and the Senior Enlisted Advisor to the Chairman. General officers wear their regimental distinctive insignia (RDI) on the black pullover sweater. The Sergeant Major of the Army and Senior Enlisted Advisor to the Chairman (if a soldier) wear, respectively, the SMA and SEAC collar insignia in lieu of the DUI on their pullover sweaters, garrison caps and berets, but their epaulets are bare. Reserve component units with WARTRACE alignments may wear the DUI of the Active unit to which they are aligned, in lieu of their peacetime DUI, provided major RSC or state TAG, and MACOM commanders agree on such wear. When personnel transfer to a new organization they wear the DUI of their new unit.

The design of the DUI is metal, or metal and enamel, only. Enlisted personnel wear the insignia on the Army green uniform coat, the black pullover sweater, and the beret.

Units not listed in AR 670-1 (other than USAG) may request a DUI be authorized if the unit has at least 500 military assigned (250 for DA operating agencies).

If the unit is active Army and has war/campaign service, a crest is also authorized. All reserve units have the same design (minuteman) and all National Guard units display the crest authorized for the state to which assigned.

After the organization receives the authorization letter for the coat of arms, a requisition (DD Form 1348-6 Manual) for the flag may be submitted to the Army Support Office, Philadelphia.