A tarantula hawk is a spider wasp which hunts tarantulas as food for its larvae. Tarantula hawks belong to any of the many species in the genera Pepsis and Hemipepsis in the family Pompilidae (spider wasps).

The more familiar species are up to five centimeter (two inches) long with a blue-black body and bright rust-colored wings (other species have black wings with blue highlights), making them among the largest of wasps. The coloring on their wings warns potential predators that they are dangerous (aposematism). Their long legs have hooked claws for grappling with their victims. The stinger of a female tarantula hawk can be up to 7 mm (1/3 inch) long, and the sting is considered among the most painful insect stings in the world. 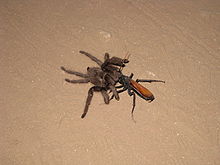 A tarantula hawk dragging its prey

The female tarantula hawk captures, stings, and paralyzes the spider, then either drags her prey back into her own burrow or transports it to a specially prepared nest, where a single egg is laid on the spider’s body, and the entrance is covered. When the wasp larva hatches, it rips a small hole in the spider's abdomen, then plunges into the spider's belly and feeds voraciously, avoiding vital organs for as long as possible to keep it fresh. After several weeks, the larva pupates. Finally, the wasp becomes an adult, and tears open the spider's belly to get out. The wasp emerges from the nest to continue the life cycle. Tarantula wasps are also nectarivorous. The consumption of fermented fruit sometimes intoxicates them to the point that flight becomes difficult. While the wasps tend to be most active in daytime summer months, they tend to avoid the very highest temperatures. The male tarantula hawk does not hunt; instead, it feeds off the flowers of milkweeds, western soapberry trees, or mesquite trees (females feed on these same plants, as well).[1] The male tarantula hawk has a behavior called hill-topping, where he sits atop tall plants and watches for passing females that are ready to reproduce. 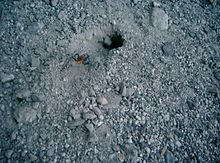 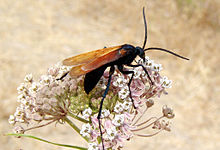 Worldwide distribution of tarantula hawks includes areas from India to Southeast Asia, Africa, Australia, and the Americas. Tarantula hawk species have been observed from as far north as Salt Lake City, Utah in the United States, and south as far as Argentina in South America, with at least 250 species living in South America.[2] Several species of tarantula hawk are found in the deserts of the southwestern United States, with Pepsis formosa and Pepsis thisbe being common. The two species are difficult to distinguish, but the majority of Pepsis formosa have metallic blue bodies and reddish antennae, which separates them from Pepsis thisbe (both species have bright orange wings that become transparent near the tip).

The tarantula hawk is relatively docile and rarely stings without provocation. However the sting, particularly of Pepsis formosa, is among the most painful of any insect, though the intense pain only lasts for about 3 minutes.[3] Commenting on his own experience, one researcher described the pain as "…immediate, excruciating pain that simply shuts down one's ability to do anything, except, perhaps, scream. Mental discipline simply does not work in these situations."[2] In terms of scale, the wasp's sting is rated near the top of the Schmidt Sting Pain Index, second only to that of the bullet ant and is described by Schmidt as "blinding, fierce [and] shockingly electric".[4] Because of their extremely large stingers, very few animals are able to eat them; one of the few animals that can is the roadrunner. As many predatory animals avoid these wasps, there are many different insects which are mimics, including various other wasps and bees (Mullerian mimics), as well as moths, flies (e.g., mydas flies), and beetles (e.g., Tragidion) (Batesian mimics).

The U.S. state of New Mexico chose the insect in 1989 to become its official state insect. The selection of the insect was prompted by a group of Edgewood, New Mexico, elementary school children doing research on states which had adopted state insects. They selected three insects as candidates, and mailed ballots to all schools for a state wide election. The winner was the Tarantula Hawk Wasp (specifically, Pepsis formosa).

The Honeywell RQ-16 T-Hawk unmanned aerial vehicle has been named after the Tarantula Hawk.

In the video game Fallout: New Vegas, the Tarantula Hawks have been mutated inside a research facility known as Big Mt. into deadly new creatures called "Cazadores" which literally means "hunters" in Spanish.

According to" Schmidt Sting Pain Index" The Tarantula Hawk has been rated having the second most painful sting in the world rating it a 4 out of 4. Schmidt index says that this sting (although said before above) has a "Blinding, fierce, shockingly electric. A running hair drier has been dropped into your bubble bath" (Please note that this is still the second most powerful sting in the world according to the chart).