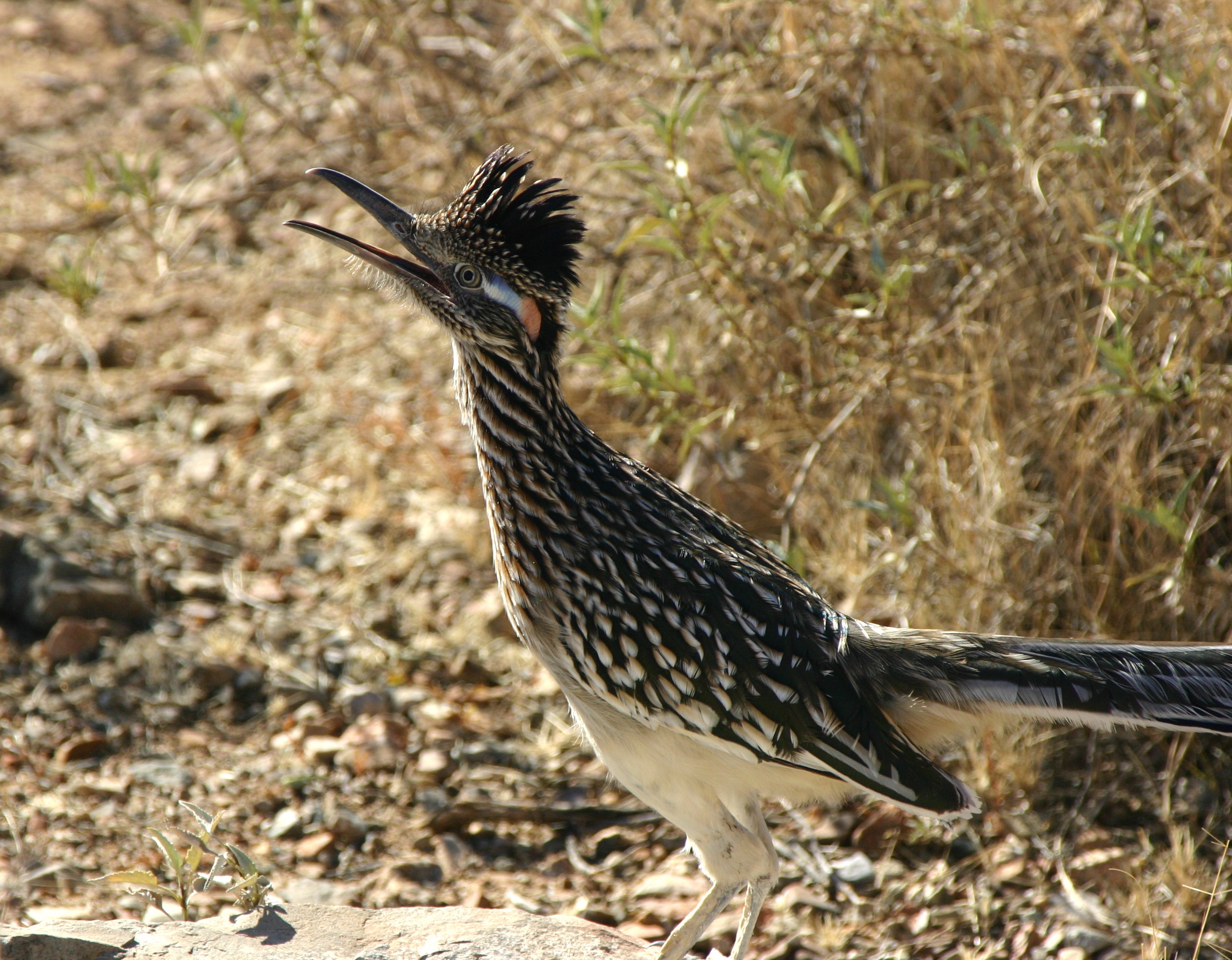 The roadrunners are two species of in the genus "Geococcyx" of the family, Cuculidae, native to North and . These two species are the ground foraging cuckoos.

Roadrunner species generally range in size from convert|18|in|cm to convert|24|in|cm from tail to beak. The roadrunner is a large, slender, black-brown and white streaked ground bird with a distinctive head crest. It has long legs, strong feet, and an oversized dark bill. The tail is broad with white tips on the three outer tail feathers. The bird has a blank patch of skin behind each eye; this patch is is shaded blue proximally to red distally. The lesser roadrunner is slightly smaller, not as streaky, and has a smaller bill. The roadrunner is large and long-legged, with a thick, long black beak and a long dark tail. The bird is terrestrial; although capable of flight, it spends most of its time on the ground. During flight, the wings are short and rounded and reveal a white crescent in the primary feathers. Roadrunners and other members of the cuckoo family have zygodactyl feet (two toes in front and two toes in back). Roadrunners can run at speeds of up to 15 miles per hour (24 km/h) and generally prefer sprinting to flying. Roadrunners will fly to escape faster moving such as s.

The roadrunner has a dove-like "coo" that is slow and descending.
Its distinct mating call is a very domineering tone, descending from a high pitch.
It also makes a rapid clattering sound with its mandibles.

Ogg vorbis file of clattering sound made with mandibles.
* [http://www.birds.cornell.edu/AllAboutBirds/BirdGuide/Greater_Roadrunner.html#fig1 Link to a greater roadrunner call]

The roadrunner is an inhabitant of the of the Southwestern , , and .
*Habitat: Roadrunners live in arid lowland or montane scrub and are often widely dispersed in the dry open country with scattered brush.
*Migration: Roadrunners are non-migratory birds that reside in their breeding area all year.
* [http://content.ornith.cornell.edu/UEWebApp/images/greater-roadrunner-map_s.gifLink to a distribution map of the Greater Roadrunner from the Cornell lab of Ornithology]

Roadrunners are and are opportunistic. Their diet normally consist of (such as grasshoppers, crickets, caterpillars, and beetles), small (such as lizards and snakes, including rattlesnakes), rodents and small mammals, s, s, s, s, small birds, eggs, nestlings, and fruits and seeds like prickly pear and sumac. The lesser roadrunner eats mainly insects. Roadrunners forage on the ground and, when hunting, usually run after prey from under cover. They may leap to catch insects, and commonly batter certain prey, such as snakes, against the ground.

"Geococcyx" is the only real predator of the tarantula hawk wasps.

Roadrunners are commonly solitary birds or live in pairs. They are monogamous and a pair may mate for life. Pairs may hold a territory all year. During the courtship display, the male bows, alternately lifting and dropping his wings and spreading his tail. He parades in front of the female with his head high and his tail and wings drooped. It has also been documented that the male may bring an offering of food to the female.
*Nest: Roadrunners nest are often on a platform nest composed of sticks (nest may sometimes contain leaves, snakeskins, or dung). The nest are commonly placed in a low tree, bush, or cactus.
*Clutch: Hatching is asynchronous and average a 2-6 egg clutch (the Lesser Roadrunners clutch size is typically smaller). Eggs are generally a white color.
*Parental care and sizes: Roadrunners have . Both sexes incubate the nest and feed the hatchlings, but males incubate the nest at night. For the first one to two weeks after the young hatch, one parent always remains at the nest. After the hatchlings are two to three weeks old they leave and never return to the nest. For a few days thereafter, the parents and young forage together. It is said that some road runners can be up to 3.2 feet tall although most range from 1-2.6 feet tall.
*Reproductive Season: spring to mid-summer depending upon species and geographic location.
*Links with images of roadrunner nestlings and nest:
**http://www.miriameaglemon.com/Trip%20Photos/Arizona%202004/Saguar6.jpg
**http://mirror-pole.com/collpage/roadrunr/rr_erny1.jpg

During the cold desert night, the roadrunner lowers its body temperature slightly, going into a slight to conserve energy. To warm himself during the day, the roadrunner exposes dark patches of skin on his back to the sun.