The Northern Cricket Frog (Acris crepitans) is a species of small Hylid frog native to the United States and northeastern Mexico. Despite being members of the tree frog family, they are not arboreal. There are three recognized subspecies.

The Northern Cricket Frog is one of North America's two smallest vertebrates, ranging from 0.75 to 1.5 inches (19–38 mm) long. Its dorsal coloration varies widely, and includes greys, greens and browns, often in irregular blotching patterns. One NY biologist has identified 6 distinct colour morphs and 4 pattern morphs, and several intrergrades between these.(Westerveld,1977). Typically there is dark banding on the legs and a white bar from the eye to the base of the foreleg. The skin has a bumpy texture. It is very similar to the Southern Cricket Frog, Acris gryllus, found in the US Southeastern Coastal Plain, though there is some overlap along the fall line. The Southern Cricket Frog has longer legs, with less webbing on the hind feet, and a more pointed snout; Northern Cricket Frogs have been observed with snouts indistinguishable from those of the Southern species (Westerveld, 1998). The line on the back of its[clarification needed] thigh is typically more sharply defined than that of the Northern Cricket Frog (Conant et al. 1998, Martof et al. 1980). Biologists have recorded Northern Cricket Frogs in the northern fringes of their range with extremely sharp posterior leg stripes.

Northern cricket frogs are diurnal and generally active much of the year, except in mid-winter in northern areas when the water is frozen. Their primary diet is small 0.5 inches to 1.5 inches long.insects, including mosquitos. They in turn are predated upon by a number of species, including birds, fish, and other frogs. To escape predators, they are capable of leaping up to 6 feet (almost 2 metres) in a single jump and are excellent swimmers. These abilities make them extremely difficult to catch.

Breeding generally occurs from May through July. The males call from emergent vegetation with a high pitched, short, pebble-like call which is repeated at an increasing rate. the sound suggests pebbles being clicked together, much like a cricket, hence the name. One egg is laid at a time and generally attached to a piece of vegetation. The 0.5 inch (14 mm) tadpoles hatch in only a few days and undergo metamorphosis in early fall. Maturity is usually reached in less than a year.

Cricket frogs prefer the edges of slow moving, permanent bodies of water. Large groups of them can often be found together along the muddy banks of shallow streams, esp. during premigratory clustering. The Northern cricket frog has been observed to hibernate upland, often at considerable distance from water. 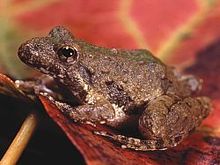 Frogs like Acris crepitans are important as an indicator of wetland health and general environmental quality in the areas they inhabit. Blanchard's cricket frogs A. c. blanchardi were once abundant in southern Michigan, but during the late 1970s and early 1980s, many populations in Michigan and the Great Lakes basin have disappeared. Thus, A. c. blanchardi is listed as a species of concern in the state of Michigan.[2] Acris crepitans is also listed as an endangered species in New York. The largest remaining population of Northern Cricket Frogs in New York State survives at Orange County's Glenmere lake/Black Meadow habitat. Many biologists think these frogs might be impacted by diseases but the bi-monthly treatment of Glenmere's water (unique to this singular Cricket Frog habitat) with the fungicide copper sulfate may be helping this population avoid infection deaths. Cricket frogs are also an endangered species in Minnesota, and Ontario, Canada.