/ˈældɨhaɪd/) is an organic compound containing a formyl group. This functional group, with the structure R-CHO, consists of a carbonyl center bonded to hydrogen and an R group.[1] The group without R is called the aldehyde group or formyl group. Aldehydes differ from ketones in that the carbonyl is placed at the end of a carbon skeleton rather than between two carbon atoms. Aldehydes are common in organic chemistry. Many fragrances are aldehydes.

Aldehydes feature an sp2-hybridized, planar carbon center that is connected by a double bond to oxygen and a single bond to hydrogen. The C-H bond is not acidic. Because of resonance stabilization of the conjugate base, an α-hydrogen in an aldehyde (not shown in the picture above) is far more acidic, with a pKa near 17, than a C-H bond in a typical alkane (pKa about 50).[2] This acidification is attributed to (i) the electron-withdrawing quality of the formyl center and (ii) the fact that the conjugate base, an enolate anion, delocalizes its negative charge. Related to (i), the aldehyde group is somewhat polar.

Aldehydes (except those without protons on the alpha carbon, such as formaldehyde and benzaldehyde) can exist in either the keto or the enol tautomer. Keto-enol tautomerism is catalyzed by either acid or base. Usually the enol is the minority tautomer, but it is more reactive.

The common names for aldehydes do not strictly follow official guidelines, such as those recommended by IUPAC but these rules are useful. IUPAC prescribes the following nomenclature for aldehydes:[3][4][5] 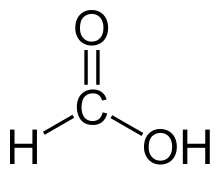 The word aldehyde was coined by Justus von Liebig as a contraction of the Latin alcohol dehydrogenatus (dehydrogenated alcohol).[6] In the past, aldehydes were sometimes named after the corresponding alcohols, for example, vinous aldehyde for acetaldehyde. (Vinous is from Latin vinum = wine (the traditional source of ethanol), cognate with vinyl.)

The term formyl group is derived from the Latin and/or Italian word formica = ant. This word can be recognized in the simplest aldehyde, formaldehyde (methanal), and in the simplest carboxylic acid, formic acid (methanoic acid, an acid, but also an aldehyde).

Aldehydes have properties that are diverse and that depend on the remainder of the molecule. Smaller aldehydes are more soluble in water, formaldehyde and acetaldehyde completely so. The volatile aldehydes have pungent odors. Aldehydes degrade in air via the process of autoxidation.

The two aldehydes of greatest importance in industry, formaldehyde and acetaldehyde, have complicated behavior because of their tendency to oligomerize or polymerize. They also tend to hydrate, forming the geminal diol. The oligomers/polymers and the hydrates exist in equilibrium with the parent aldehyde.

Aldehydes are readily identified by spectroscopic methods. Using IR spectroscopy, they display a strong νCO band near 1700 cm−1. In their 1H NMR spectra, the formyl hydrogen center absorbs near δ9, which is a distinctive part of the spectrum. This signal shows the characteristic coupling to any protons on the alpha carbon.

Important aldehydes and related compounds. The aldehyde group (or formyl group) is colored red. From the left: (1) formaldehyde and (2) its trimer 1,3,5-trioxane, (3) acetaldehyde and (4) its enol vinyl alcohol, (5) glucose (pyranose form as α-D-glucopyranose), (6) the flavorant cinnamaldehyde, (7) the visual pigment retinal, and (8) the vitamin pyridoxal.

Traces of many aldehydes are found in essential oils and often contribute to their favorable odors, e.g. cinnamaldehyde, cilantro, and vanillin. Possibly because of the high reactivity of the formyl group, aldehydes are not common in several of the natural building blocks - amino acids, nucleic acids, lipids. Most sugars, however, are derivatives of aldehydes. These "aldoses" exist as hemiacetals, a sort of masked form of the parent aldehyde. For example, in aqueous solution only a tiny fraction of glucose exists as the aldehyde.

There are several methods for preparing aldehydes,[7] but the dominant technology is hydroformylation.[8] Illustrative is the generation of butyraldehyde by hydroformylation of propene:

Aldehydes are commonly generated by alcohol oxidation. In industry, formaldehyde is produced on a large scale by oxidation of methanol.[9] Oxygen is the reagent of choice, being "green" and cheap. In the laboratory, more specialized oxidizing agents are used, but chromium(VI) reagents are popular. Oxidation can be achieved by heating the alcohol with an acidified solution of potassium dichromate. In this case, excess dichromate will further oxidize the aldehyde to a carboxylic acid, so either the aldehyde is distilled out as it forms (if volatile) or milder reagents such as PCC are used.[10]

Oxidation of primary alcohols to form aldehydes and can be achieved under milder, chromium-free conditions by employing methods or reagents such as IBX acid, Dess-Martin periodinane, Swern oxidation, TEMPO, or the Oppenauer oxidation.

Another oxidation route significant in industry is the Wacker process, whereby ethylene is oxidized to acetaldehyde in the presence of copper and palladium catalysts (acetaldehyde is also produced on a large scale by the hydration of acetylene).

Aldehydes are highly reactive and participate in many reactions.[7]" From the industrial perspective, important reactions are condensations, e.g. to prepare plasticizers and polyols, and reduction to produce alcohols, especially "oxo-alcohols." From the biological perspective, the key reactions involve addition of nucleophiles to the formyl carbon in the formation of imines (oxidative deamination) and hemiacetals (structures of aldose sugars).[7]

The formyl group can be readily reduced to a primary alcohol (-CH2OH). Typically this conversion is accomplished by catalytic hydrogenation either directly or by transfer hydrogenation. Stoichiometric reductions are also popular, as can be effected with sodium borohydride.

The formyl group readily oxidizes to the corresponding carboxylic acid (-COOH). The preferred oxidant in industry is oxygen or air. In the laboratory, popular oxidizing agents include potassium permanganate, nitric acid, chromium(VI) oxide, and chromic acid. The combination of manganese dioxide, cyanide, acetic acid and methanol will convert the aldehyde to a methyl ester.[11]

Another oxidation reaction is the basis of the silver mirror test. In this test, an aldehyde is treated with Tollens' reagent, which is prepared by adding a drop of sodium hydroxide solution into silver nitrate solution to give a precipitate of silver(I) oxide, and then adding just enough dilute ammonia solution to redissolve the precipitate in aqueous ammonia to produce [Ag(NH3)2]+ complex. This reagent will convert aldehydes to carboxylic acids without attacking carbon-carbon double-bonds. The name silver mirror test arises because this reaction will produce a precipitate of silver whose presence can be used to test for the presence of an aldehyde.

If the aldehyde cannot form an enolate (e.g., benzaldehyde), addition of strong base induces the Cannizzaro reaction. This reaction results in disproportionation, producing a mixture of alcohol and carboxylic acid.

Nucleophiles add readily to the carbonyl group. In the product, the carbonyl carbon becomes sp3 hybridized, being bonded to the nucleophile, and the oxygen center becomes protonated:

In many cases, a water molecule is removed after the addition takes place; in this case, the reaction is classed as an addition-elimination or addition-condensation reaction. There are many variations of nucleophilic addition reactions.

In the acetalisation reaction, under acidic or basic conditions, an alcohol adds to the carbonyl group and a proton is transferred to form a hemiacetal. Under acidic conditions, the hemiacetal and the alcohol can further react to form an acetal and water. Simple hemiacetals are usually unstable, although cyclic ones such as glucose can be stable. Acetals are stable, but revert to the aldehyde in the presence of acid. Aldehydes can react with water to form hydrates, R-C(H)(OH)(OH). These diols are stable when strong electron withdrawing groups are present, as in chloral hydrate. The mechanism of formation is identical to hemiacetal formation.

In alkylimino-de-oxo-bisubstitution, a primary or secondary amine adds to the carbonyl group and a proton is transferred from the nitrogen to the oxygen atom to create a carbinolamine. In the case of a primary amine, a water molecule can be eliminated from the carbinolamine to yield an imine. This reaction is catalyzed by acid. Hydroxylamine (NH2OH) can also add to the carbonyl group. After the elimination of water, this will result in an oxime. An ammonia derivative of the form H2NNR2 such as hydrazine (H2NNH2) or 2,4-dinitrophenylhydrazine can also be the nucleophile and after the elimination of water, resulting in the formation of a hydrazone, which are usually orange crystalline solids. This reaction forms the basis of a test for aldehydes and ketones.[12]

The cyano group in HCN can add to the carbonyl group to form cyanohydrins, R-C(H)(OH)(CN). In the Grignard reaction, a Grignard reagent adds to the group, eventually yielding an alcohol with a substituted group from the Grignard reagent. Related reactions are the Barbier reaction and the Nozaki-Hiyama-Kishi reaction. In organostannane addition tin replaces magnesium.

In the aldol reaction, the metal enolates of ketones, esters, amides, and carboxylic acids will add to aldehydes to form β-hydroxycarbonyl compounds (aldols). Acid or base-catalyzed dehydration will then lead to α,β-unsaturated carbonyl compounds. The combination of these two steps is known as the aldol condensation. The Prins reaction occurs when a nucleophilic alkene or alkyne reacts with an aldehyde as electrophile. The product of the Prins reaction varies with reaction conditions and substrates employed.

This reaction is used as a test for aldehydes.[12]

Of all aldehydes, formaldehyde is produced on the largest scale, about 6,000,000 tons/y. It is mainly used in the production of resins when combined with urea, melamine, and phenol (e.g., Bakelite). It is a precursor to methylene diphenyl diisocyanate ("MDI"), a precursor to polyurethanes.[9] The second main aldehyde is butyraldehyde, of which about 2,500,000 tons/y are prepared by hydroformylation. It is the principal precursor to 2-ethylhexanol, which is used as a plasticizer.[13] Acetaldehyde once was a dominating product, but production levels have declines to less than 1M ton/y because it mainly served as a precursor to acetic acid, which is now prepared by carbonylation of methanol. Many other aldehydes find commercial applications, often as precursors to alcohols, the so-called oxo alcohols, which are used in detergents. Some aldehydes are produced only on a small scale (less than 1000 tons/y) and are famously used as ingredients in perfumes and flavors. These include cinnamaldehyde and its derivatives, citral, and lilial.