Air France Flight 4590 was a Concorde flight operated by Air France which was scheduled to run from Charles de Gaulle International Airport near Paris, to John F. Kennedy International Airport in New York City. On 25 July 2000, it crashed in Gonesse, France. All one hundred passengers and nine crew members on board the flight died. On the ground, four people were killed with one left injured.

The flight was chartered by German company Peter Deilmann Cruises. All passengers were on their way to board the cruise ship MS Deutschland in New York City[1][2] for a 16-day cruise to South America.[3]

This was Concorde's only accident in which fatalities occurred. It was the beginning of the end for Concorde as an airliner; the type was retired three years later.

Post-accident investigation[4] revealed that the aircraft was just at, if not exceeding, maximum weight for ambient temperature and other conditions, and up to one ton over maximum structural weight.[5] As it left the gate, it was loaded such that the centre of gravity was excessively aft.[6] Fuel transfer during taxi may have overfilled the number five wing tank.[7] A twelve inch spacer that keeps the left main landing gear in alignment had not been replaced after recent maintenance, though the 2002 French Bureau Enquetes-Accidents investigation concluded that this did not contribute to the accident.[8] The wind at the airport was light and variable that day, and was reported to the cockpit crew as an eight knot tailwind as they lined up on runway 26R.[9] Over an hour delayed, the crew proceeded with take-off.

Five minutes before that decision, a Continental Airlines DC-10 departing for Newark, New Jersey, had lost a titanium alloy strip, 435 millimetres (17.1 in) long and about 29 millimetres (1.1 in) to 34 millimetres (1.3 in) wide, during takeoff from the same runway.

During the Concorde's subsequent take-off run, this piece of debris, still lying on the runway, cut a tyre causing rupture and tyre debris to be hurled by centrifugal force. A large chunk of this debris (4.5 kilograms or 9.9 pounds) struck the underside of the aircraft's wing structure at an estimated speed of 500 kilometres per hour (310 mph). Although it did not directly puncture any of the fuel tanks, it sent out a pressure shockwave that eventually ruptured the number five fuel tank at the weakest point, just above the undercarriage. Leaking fuel gushing out from the bottom of the wing was most likely to have been ignited by an electric arc in the landing gear bay or through contact with severed electrical cables. At the point of ignition, engines one and two both surged and lost all power, but engine one slowly recovered over the next few seconds. A large plume of flame developed; the Flight Engineer then shut down engine two, in response to a fire warning and the Captain's command.[10]

Having passed V1 speed, the crew continued the take-off but the plane did not gain enough airspeed with the three remaining engines, because the severed electrical cables prevented the retraction of the undercarriage. The aircraft was unable to climb or accelerate, and it maintained a speed of 200 knots (370 km/h; 230 mph) at an altitude of 60 metres (200 ft). The fire caused damage to the port wing, and it began to disintegrate – melted by the extremely high temperatures. Engine number one surged again, but this time failed to recover. Due to the asymmetric thrust, the starboard wing lifted, banking the aircraft to over 100 degrees. The crew reduced the power on engines three and four in an attempt to level the aircraft, but with falling airspeed they lost control and stalled, crashing into the Hôtelissimo[11] Les Relais Bleus Hotel[12][13] near the airport.[1]

The crew was trying to divert to nearby Le Bourget Airport, but accident investigators stated that a safe landing, given the aircraft's flight path, would have been highly unlikely.

As the cockpit voice recorder (CVR) transcript recorded it, the last intelligible words of the crew were (translated into English):

Control tower: "Fire service leader, correction, the Concorde is returning to runway zero nine in the opposite direction." 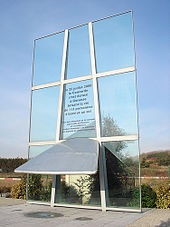 A memorial to the crash

All passengers and the crew were killed in the incident. Most of the passengers were German tourists en route to New York for a cruise.[14]

The Concorde had been the safest working passenger airliner in the world according to passenger deaths per distance travelled. The crash of a Concorde was the beginning of the end of the aircraft's career.[15]

A few days after the crash, all Concordes were grounded, pending an investigation into the cause of the crash and possible remedies.[16]

Air France's Concorde operation had been a money-losing venture, but had been kept in service as a matter of national pride[17] (by contrast, British Airways claimed a profit on its Concorde operations[18][19]). Revenue service was resumed in 2001, until the remaining aircraft were retired in 2003.[20]

The official investigation was conducted by France's accident investigation bureau, the BEA, and it was published on 14 December 2004. Only 1 video was found of the flight.

The investigators concluded that:

In November 1981, the American NTSB sent a letter of concern, which included safety recommendations for the Concorde, to the French BEA. This communiqué was the result of the NTSB's investigations of four Air France Concorde incidents, during a 20 month period, from July 1979, through February 1981. The NTSB described those incidents as "potentially catastrophic", because they were caused by blown tyres during take-off. The NTSB also expressed concern about the lack of adequate remedies, on the part of the French, as well as improper crew responses to those incidents.

To save on weight, Concorde was designed to take off without the assistance of flaps or slats. That required a significantly higher air and tyre speed, during the take-off roll, which imposed a much greater centripetal force load on the tyres. That higher speed increased the risk of tyre explosion during take-off. When the tyres did explode, much greater kinetic energy was carried by the resulting shrapnel travelling at great speeds tangentially from the rims (the kinetic energy of an object being directly proportional to the square of its speed), increasing the risk of serious damage to the aircraft. A thicker skin on the bottom side of the wings could have prevented serious damage from an exploding tyre, but that would have added too much weight, cancelling out most of the advantage of not having flaps or slats.

British investigators and former French Concorde pilots looked at several other possibilities that the report ignored, including an unbalanced weight distribution in the fuel tanks and loose landing gear. They came to the conclusion that the Concorde veered off course on the runway, which reduced take-off speed below the crucial minimum. The aircraft had passed close to a Boeing 747 carrying French President Jacques Chirac who was returning from the 26th G8 summit meeting in Okinawa, Japan,[23][24] which was much further down the runway than the Concorde's usual take-off point; only then did it strike the metal strip from the DC-10.[25]

The Concorde was missing the crucial spacer from the left main landing-gear beam that would have made for a snug-fitting pivot. This compromised the alignment of the landing gear and the wobbling beam and gears allowing three degrees of movement possible in any direction. The uneven load on the left leg's three remaining tyres skewed the landing gear, with the scuff marks of four tyres on the runway showing that the plane was veering to the left.[27]

The accident led to modifications being made to Concorde, including more secure electrical controls, Kevlar lining to the fuel tanks, and specially developed, burst-resistant tyres. The new-style tyres would be another contribution to future aircraft development.

The crash of the Air France Concorde nonetheless proved to be the beginning of the end for the type.[28] Just before service resumed, the 11 September 2001 attacks took place, resulting in a marked drop in customer numbers, and contributing to the eventual end of Concorde flights.[29] Air France stopped flights in May 2003, while British Airways ended its Concorde flights in October 2003.

In[update] June 2010, two groups were attempting to revive Concorde for "Heritage" flights in time for the 2012 Olympics. The British Save Concorde Group, SCG, and French group Olympus 593 were attempting to get four Rolls-Royce Olympus engines running smoothly at Le Bourget Air and Space Museum in France.[30]

On 10 March 2005, French authorities began a criminal investigation of Continental Airlines, whose plane dropped the debris on the runway.[31]

In September 2005, Henri Perrier, the former head of the Concorde division at Aérospatiale, and Jacques Herubel, the Concorde chief engineer, came under investigation for negligence: a report stated that the company had more than 70 incidents involving Concorde tyres between 1979 and 2000, but had failed to take appropriate steps based upon these incidents.[32]

On 12 March 2008, Bernard Farret, a deputy prosecutor in Pontoise, outside Paris, asked judges to bring manslaughter charges against Continental Airlines and four individuals:[33]

Charges against Jacques Herubel were reported to have been dropped,[33][34] but on 3 July 2008, confirmation of the trial, including Herubel, was published.[35] The trial started on 2 February 2010. Also facing fines or a custodial sentence were the designers of the plane, who prosecutors say knew that the plane's fuel tanks could be susceptible to damage from foreign objects, as well as a French official responsible for the regulation of the plane's safety.[36]

Continental denied the charges,[37] and claimed in court that the aircraft was already on fire when it passed over the titanium strip.[38]

On 6 December 2010, Continental Airlines was found criminally responsible for the disaster by a Parisian court and was fined €200,000 ($271,628) and ordered to pay Air France €1 million. Continental mechanic John Taylor was given a 15-month suspended sentence, while another airline operative and three French officials were cleared of all charges. The court ruled that the crash resulted from a piece of metal from a Continental jet that was left on the runway; the object punctured a tyre on the Concorde and then ruptured a fuel tank.[39] Another Continental employee, Stanley Ford, was found not guilty.[39] Continental's lawyer, Olivier Metzner, said it would appeal the verdict.[40]

The court also ruled that Continental would have to pay 70% of any compensation claims. As Air France has paid out €100 million to the families of the victims, Continental could be made to pay its share of that compensation payout.[39]