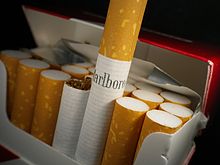 Marlboro (US: /ˈmɑrbᵊroʊ/[2] UK: /ˈmɑːlb(ə)rə/ or UK: /ˈmɔːlb(ə)rə/[3]) is the largest selling brand of cigarettes in the world. It is made by Philip Morris USA (a branch of Altria) within the US, and by Philip Morris International (now separate from Altria) outside the US. It is famous for its billboard advertisements and magazine ads of the Marlboro Man.

The brand is named after Great Marlborough Street, the location of its original London factory.[citation needed] Richmond, Virginia is now the location of the largest Marlboro cigarette manufacturing plant.

Philip Morris launched the Marlboro brand in 1924 as a woman's cigarette, based on the slogan "Mild As May". In the 1920s, advertising for the cigarette was primarily based around how ladylike the cigarette was. To this end, the filter had a printed red band around it to hide lipstick stains, calling it "Beauty Tips to Keep the Paper from Your Lips".[1] 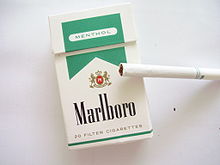 A pack of Marlboro Menthol Golds 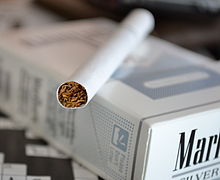 The repositioning of Marlboro as a men's cigarette was handled by Chicago advertiser Leo Burnett. The proposed campaign was to present a lineup of manly figures: sea captains, weightlifters, war correspondents, construction workers, etc. The cowboy was to have been the first in this series. While Philip Morris was concerned about the campaign, they eventually greenlighted the campaign.[1]

Within a year, Marlboro's market share rose from less than one percent to the fourth best-selling brand. This convinced Philip Morris to drop the lineup of manly figures and stick with the cowboy .[1]

In order to comply with a court ruling USA vs. Philip Morris,[4] Philip Morris (and all other cigarette companies) is now prevented from using words such as "Lights", "Ultra-Lights", "Medium", "Mild", or any similar designation that yields a false impression that they are safer than regular full flavor cigarettes. Thus Marlboro and other cigarette companies must use only color coding instead; for example Marlboro Lights are now called Marlboro Gold Pack. 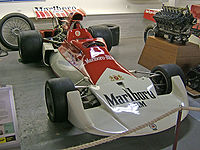 BRM P180: Marlboro's motorsport sponsorship started with the BRM Formula One team in 1972.

For 1974 Marlboro dissolved its sponsorship of both teams and became famously associated with the McLaren team, which brought it its first constructors' championship and its drivers title for Emerson Fittipaldi. The team was successful through to 1978, with another world champion in James Hunt in 1976. Following that the partnership went through a dry patch until Ron Dennis's Project Four Organisation took over the team in 1981. Marlboro-sponsored McLarens dominated F1 for much of the 1980s and early 1990s, with Niki Lauda, Alain Prost and Ayrton Senna between them winning the drivers' championship all but one year from 1984 to 1991. After the departure of Ayrton Senna in 1993, Marlboro McLaren did not win a race for three years. Marlboro ended their sponsorship of the team in 1996, which ended the famous red and white McLaren livery.

Marlboro also sponsored Scuderia Ferrari as secondary sponsor from the mid 1980s as a result of company president Enzo Ferrari, who refused to allow "outside" sponsor brands to appear on his team cars. 5 Years after his death in 1988, Marlboro began to take over as the primary sponsor, which they would be later officially branded as Scuderia Ferrari Marlboro. 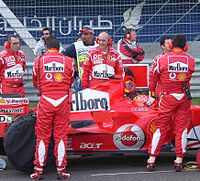 Prominent Marlboro branding on Ferrari Formula One car and team at the 2006 Bahrain Grand Prix.

In September 2005, Ferrari signed an extension of their sponsorship arrangement with Marlboro until 2011. This comes at a time when tobacco sponsorship has become wholly illegal in the European Union (including F1 races) and other major teams have withdrawn from relationships with tobacco companies, for example McLaren ended their eight year relationship with West, Renault broke with JT and BAT withdrew in 2006. In reporting the deal, F1 Racing magazine judged it to be a "black day" for the sport, putting non-tobacco funded teams at a disadvantage and discouraging other brands from entering a sport still associated with tobacco. The magazine estimates that in the period between 2005 and 2011 Ferrari will receive $1 billion from the agreement. Depending on the venue of races (and the particular national laws) the Marlboro branding will be largely subliminal in most countries. In April 2008, Marlboro displayed explicit on-car branding on Ferrari for the last time, now permanently replaced with a variety of barcodes in place of it. Now there are calls from leading health officials, the European Commissioner for Health and influential doctors for a review of the subliminal advertising contract Marlboro has with Advertising Guerrilla and Ferrari, due to the implications of influencing the purchase of cigarettes with possible subliminal advertising, as no tobacco products can be promoted in sporting events in Europe by law.[5] The Ferrari team claims the barcode is part of the car design, not an advertising message.[6]

The controversial barcode designed was recently removed by Ferrari for the start of the Spanish Grand Prix in the 2010 season but the barcode remains on drivers team gear.[7] In January 2011, the Scuderia Ferrari presented a new logo for its racing team. This logo is considered by a specialised F1-website[8] as a subliminal advertisement for Marlboro, evocating the top-left corner design of a Marlboro cigarettes pack.

In June 2011, Ferrari extended its collaboration with Marlboro through to the end of 2015, despite cigarette advertising being banned in the sport.[9]

Marlboro also sponsored the Alfa Romeo F1 Team between 1980 and 1983, although unable to match up to its pre-war and 1950s heyday, the team only achieving one pole position, one fastest lap and four podium finishes.

Since their start in Formula One, Marlboro has also sponsored numerous teams and races, from Joest Racing in Group C in 1983 to Toyota at the 24 Hours of Le Mans in 1999 (despite a tobacco ban in France) and Marlboro Masters Formula Three race in Zandvoort.

Marlboro sponsorship in Champ Car (also known as 'CART' and 'IndyCar' at that time) dates back to 1986. The Penske cars in the Indy Racing League (IRL) currently run in Marlboro's distinctive red and white colors. In 2006, a Marlboro-sponsored car won the Indianapolis 500. However for the 2007 season, Marlboro have ceased their sponsorship of the Penske Cars, their place being taken by Kodak, and later Cellco Partnership. The team will retain the color scheme. Where 'Marlboro Penske' appeared on the side of the cars, 'Team Penske' replaced it. Although "Marlboro" does not sponsor Team Penske, Philip Morris USA is still Team Penske's main sponsor, and the Penske team's new name, Penske Championship Racing, reflects the Cellco Partnership sponsorship. (The Penske Championship Racing name was adopted to evade NASCAR's ban on wireless telephone advertising; Cellco's team is marketed as Verizon Championship Racing.)

Marlboro also sponsor Holden Dealer Team from 1974 through to 1984. The Marlboro branding gave rise to some of Australia's most prominently recognizable race cars such as the L34 and A9X Torana, as well as the famous VK Group C "Big Banger" Commodore of Peter Brock and Larry Perkins Bathurst winning fame. As well as this, in Motorcycling Grand Prix, Marlboro sponsored the Kenny Roberts run Yamaha team in 500cc as well as one of his former rider, Wayne Rainey's team in the 250cc class. As a result of their sponsorship, Marlboro decals on race replica bikes became one of the most popular decal kits that were available. Marlboro nowadays sponsors the Ducati MotoGP team whom Casey Stoner rides for, despite as of the 2009 Grand Prix motorcycle racing season , they are only allowed to brand the bikes at 1 round, in Qatar. The controversial barcode designed was recently removed by Ducati for the start of the French motorcycle Grand Prix in the 2010 season but the barcode remains on riders team gear.

Marlboro also has a long history in rallying sponsorship, including with the factory World Rally Championship teams of Toyota (notably with Freddy Loix until the end of 1998), Mitsubishi (to whom Loix moved from 1999 until 2001, with the iconic livery remaining on successive Lancer Evolutions until the marque's temporary WRC withdrawal at the end of 2002), and Peugeot, from 2003 to 2005. From 2005 to 2007, GP2 Series team ART Grand Prix was also sponsored by Marlboro. Marlboro are generally credited as being among the most important of sponsors to the world of Formula 1 (and motor racing in general) in terms of the amount of financial backing given to various competitors. In mid-2006, special "racing editions" of Marlboro Red were sold in the UK, with a Ferrari-inspired design, although the Ferrari name and badge were not used. They also come in Menthols.