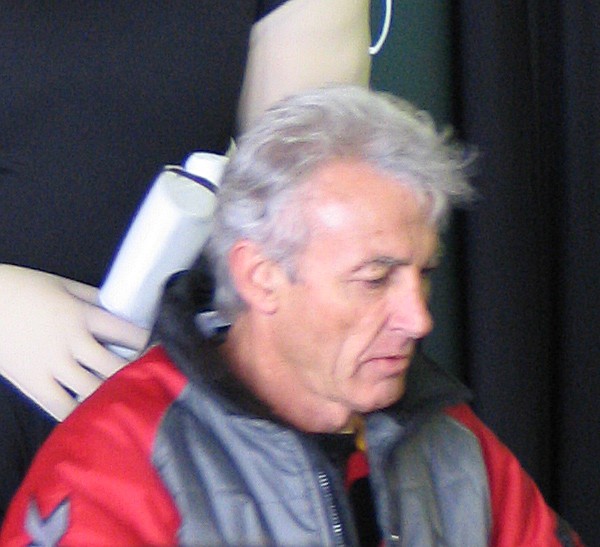 Peter Geoffrey Brock AM (, – , ) otherwise known as "Peter Perfect", "The King of the Mountain" or simply as "Brockie" or "Brocky" was one of 's best-known and most successful drivers. Brock was most often associated with for almost 40 years, although he raced vehicles of other manufacturers including , Ford, Volvo, and . [http://media.gm.com/servlet/GatewayServlet?target=http://image.emerald.gm.com/gmnews/viewpressreldetail.do?domain=20&docid=28504] He won the endurance race nine times, the Sandown 500 touring car race nine times and the three times. Brock's business activities included the (HDT) that produced Brock's racing machines as well as a number of modified high-performance road versions of his racing cars.

Brock was born in the Victorian country town of Hurstbridge (now an outer suburb of Melbourne) and continued to live there throughout his life.

During his early career Brock raced some "wild and woolly" creations including the famous blue 6-cylinder Holden-powered . One of his early successes was to become the 1970 Australian champion. Brock rose to public attention in .

In 1969 he raced in the Bathurst 500—as it was then known—Australia's most prestigious endurance road race and won it for the first time in 1972. Brock would win the event a total of nine times between 1972 and 1987, a feat that has not been equalled. His 1979 win was remarkable in that he claimed the flag by six laps, a record that (due to changes in race regulations introduced in the 1990s) will never be broken, and broke the circuit lap record on his final lap. In 32 starts at Bathurst he claimed pole position a record six times. His record at this race earned him the titles "King of the Mountain" and "the Bradman of Bathurst"—after cricketer —although Brock himself cared little for the latter title.

Along with his record at the Bathurst race, Brock also claimed victory in the Sandown 500 race nine times, including a string of seven consecutive wins. He won a total of 37 races during his career in the Australian Touring Car/V8 Supercar championship, a record only eventually equalled by in 2006 and beaten in 2007.

As the lead driver for the in a succession of both 6- and 8-cylinder s and, later, V8 Commodores the smooth-talking clean-cut Brock became a household name that transcended motor racing as he emerged to be one of the best-known modern and racing drivers, spoken of with the same reverence as Sir Jack Brabham, Alan Jones and Jim Richards.

Brock and the Holden Dealer Team worked in partnership, with full factory approval and assistance, to produce a number of high-performance modifications to the Commodores under existing CAMS Group C regulations from 1980 to 1988. Some of these were HDT " specials"—one step away from race cars. It was around this time that Brock began his run of six Bathurst 1000 wins in seven years, including his six-lap victory in the 1979 event.

In 1986, Brock was crowned "King of Moomba" by the Melbourne based festival committee. [Craig Bellamy, Gordon Chisholm, Hilary Eriksen (17 Feb 2006) "Moomba: A festival for the people.": http://www.melbourne.vic.gov.au/rsrc/PDFs/Moomba/History%20of%20Moomba.pdf PDF pp 17-22]

Unlike several other Australian drivers, Brock did not seek a full-time racing career outside Australia. He did attempt the three times in privateer vehicles, firstly in 1976 in a BMW 3.0CSL, which failed; he then returned for the 1981 race teamed with Colin Bond and Jim Richards in the Porsche Cars Australia #74 Porsche 924 Carrera GTR but while the team practiced, they were only named as a reserve, not participating in the race itself; then in 1984 in the orange Bob Jane T-Marts sponsored with co-driver , running as high as 5th at one stage of the race, they retired after Perkins crashed on lap 145. [cite news
last = Scott
first = Phil
title = Brock at Le Mans
work = Wheels Magazine
publisher = Australian Consolidated Press
date = September 1984] Brock also won the 1979 Round Australia trial, a long-distance endurance rally featuring some dirt road sections completely different to the circuit racing where he made his name.

Brock also worked with the Victorian authorities promoting the campaign against . The most obvious sign of this association was the race car number 05 which related to the 0.05% in Victoria, which he utilized constantly from the mid-1970s. Most cars he raced in, regardless of the motor racing division, bore this number, including the one in which he died.

Brock began to consult health practitioner . He gave up alcohol and cigarettes, and became a vegan.

The overwhelming majority of the Australian motoring community regarded the device as . Brock also recommended tyre pressures of 22psi (150) for his polariser-equipped vehicles, a level which many regarded as near-dangerously low. Holden, fearing the consequences of being associated with the device and a resulting breakdown in communications over Brock's plans for new models, cut ties with Brock and set up an alternative racing/modification operation, . During this period, Brock also became involved in the importation and even the modification of the , a cheap Soviet-built hatchback a world away from the high-performance V8-powered Commodores he was famous for. [cite web
url = http://www.wa.apana.org.au/~abolton/samrview.html
title = I'd rather a Lada!
accessdate = 2006-09-15
last = Bolton
first = Andrew
authorlink = http://www.wa.apana.org.au/~abolton/samara.html
format = Review excerpts from Australian motoring magazines]

While Brock was always in a Holden, he did have 'brief flirtations' with other makes in touring car racing. After his 1987 Holden split, he campaigned a (1988), and a (1989-90). He also campaigned a Ford Falcon in the AUSCAR series.

By 1991 he and Holden, having patched up their relationship, were back together. A further flirtation of Brock's was in 1994 when he raced a in the one-off Bathurst 12-Hour. He also competed for Volvo in the Australian Super Touring Championship in 1996.

Brock continued to race in privately supported teams for some years afterwards, but returned to the factory Holden Racing Team in 1994. Brock retired from full-time driving in 1997.

After his nominal 'retirement' he made two returns to Bathurst (2002 and 2004) and competed in the Nations Cup for highly modified and exotic cars in 2004. In 2002, he returned to top-level touring car racing as a team patron with in Commodore in that year's Bathurst 1000 and the team was renamed 'Team Brock' as a branding exercise. The 'Team Brock' branding exercise was revived for 2003 this time with but this time Brock's role was as a mentor rather than a driver. Frustrated with the lack of control he held over a team bearing his name, Brock and the team parted company at the end of the season.

He occasionally competed in various enthusiast-level motorsport events such as the . The team's vehicles are actually constructed by Holden Special Vehicles. His smooth on-camera persona and familiarity to older Australians continued to sell products, including Mobil Oils and Bridgestone tyres, as the controversy of the Energy Polarizer had been largely forgotten.

He achieved a tenth Bathurst win, in a manner of sorts, later in 2003, at the Bathurst 24 Hour, when he won, with , and in a prepared HRT 427C, a highly modified version of the production car.

Due to his extraordinary success on the racing track Brock became the Australian racing driver with the highest-profile as he undertook several media commitments. When not racing he often appeared on television screens as a presenter; hosting motoring shows such as TV3's "" (1996-1998) and TVNZ's "Love that Car" (2000).

Several years later Brock met 1973 pageant winner and Channel Seven weather presenter . They married in April 1974 but this marriage was to be even shorter than his first, ending after only one year. [cite news |title = Miss Australia Divorce |work = The Daily Mirror |date = , ] In 2006, Downes claimed Brock repeatedly beat her, and forced her to have an abortion. [ Saturday , p.11]

Brock next entered into a relationship with Bev McIntosh, the wife of one of his motor racing team. After his two failed marriages Brock was hesitant to marry McIntosh.

Although the couple never formally married, Peter always called Bev his "wife", and she changed her surname to Brock by . They had two children together, Robert and Alexandra. Her oldest, James, is Bev's son from a previous marriage.

Bev wrote Peter's biography [cite book | last = Brock | first = Bev | title = Peter Brock: Living with a Legend | year = 2004 | publisher = Macmillan Australia | location = Sydney ] herself in 2004 after finding most potential authors had incorrect preconceived notions about him. She also expressed a desire to show his human side, to encourage others that they, too, can achieve their goals.

According to Bev, Brock was not an entirely faithful partner. She has described in a book her eventual tiring in the early 1990s of his relationships with "one too many secretaries". [cite news
coauthors = Michael Bodey and Alana Buckley-Carr
title = Brock's affair shattered my family: mate
url = http://www.theaustralian.news.com.au/story/0,20867,20395745-2702,00.html
work =
publisher =
date = |accessdate = 2006-09-16 ]

At 11.50am () on , , while driving in the " '06" rally, Brock was 3 kilometres from the finish of the second stage of the race at Gidgegannup, about 40km from [cite news|url=http://www.cams.com.au/content.asp?PageID=Article&ObjectID=775|title=Australian Motor Racing Legend Dies in Targa West|publisher=Confederation of Australian Motorsport|date=, ] when he skidded off a downhill left-hand bend on Clenton Road for over 50 metres in his 2001 [cite news|url=http://www.abc.net.au/news/newsitems/200609/s1736485.htm|title=Racing legend Brock killed in car crash|publisher=ABC News|date=, ] and hit a tree. 61-year-old Brock was killed instantly. His co-driver, , was taken to hospital in a serious but stable condition. [cite news|url=http://www.smh.com.au/news/national/peter-brock-killed-in-crash/2006/09/08/1157222310976.html|title=Peter Brock killed in crash|publisher=|date=, ] [cite news|url=http://thewest.com.au/default.aspx?MenuID=28&ContentID=6044|title=Motor racing legend Peter Brock 'reportedly killed'|publisher=|date=, ] Video footage of the crash (provided by a fan and the in-car camera) was reviewed by Western Australian police to help determine the cause of the accident, however coroner Alastair Hope's report indicated his death was caused by high speed and that no coronial inquest would be performed [cite news|url=http://www.news.com.au/story/0,23599,23404806-2,00.html|title=No inquest into Brock race death|publisher=|date=, ] .

Brock's children accepted the offer of a Victorian , with former partner Bev telling ABC Radio::" [Brock] was loved. He was in the public eye, and everything had to be done with a flourish and with a bang. It's probably the way he would want to go out, (and) he would want to be remembered." [cite news|url=http://www.news.com.au/story/0,23599,20375524-2,00.html|title=Brock family accepts state funeral|publisher=|date=, ]

The editor of "", Ged Bulmer, said that Brock would be remembered for his nine victories at Bathurst, for "He had a long and very successful career there, he was the 'King of the Mountain' as he came to be known."

Brock was farewelled with a state funeral [cite news|url=http://www.smh.com.au/news/national/remarkable-brocks-hard-road/2006/09/19/1158431681495.html?page=fullpage#contentSwap1|title='Remarkable' Brock's hard road|publisher=|date=, ] at Melbourne's St. Paul's Anglican Cathedral, on , . There will also be a permanent memorial at Peter Brock's "home" raceway, , placed there on . [cite news|url=http://www.smh.com.au/news/national/brocks-body-returns-to-melbourne/2006/09/12/1157826937657.html|title=Brock's body returns to Melbourne|publisher=|date=, ]

In honour of his achievements and in recognition of his contribution to Australian motorsport, the winner's trophy now carries his name.

In addition to his racing championships, Brock's efforts to society have been recognised in various ways:
* Member of the Order of Australia ( )—AM QB80. For service to the sport of motor racing. [http://www.itsanhonour.gov.au/honours/honour_roll/search.cfm?aus_award_id=886776&search_type=quick&showInd=true]
* (1986) Awarded by the for his promotion of the "Energy Polariser" device. [http://www.skeptics.com.au/spoon/aboutthespoon.htm]
* ( ) [http://www.itsanhonour.gov.au/honours/honour_roll/search.cfm?aus_award_id=979107&search_type=quick&showInd=true]
* ( ) For outstanding service to the community through fundraising. [http://www.itsanhonour.gov.au/honours/honour_roll/search.cfm?aus_award_id=1116523&search_type=quick&showInd=true]
*National Service Medal ( ) - For Military Service (?-1967) [http://minister.dva.gov.au/media_releases/2006/02_feb/va006.htm] [http://www.brock05.com/brockA30.php]