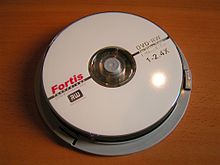 A spindle with discs of the DVD+RW format

DVD+RW is a physical format for rewritable DVDs and can hold up to 4.7 GB. DVD+RW was created by the DVD+RW Alliance, an industry consortium of drive and disc manufacturers. Additionally, DVD+RW supports a method of writing called "lossless linking", which makes it suitable for random access and improves compatibility with DVD players.[1]

DVD+RW must be formatted before recording by a DVD recorder.

The rewritable DVD+RW standard was formalized earlier than the non-rewritable DVD+R (the opposite was true with the DVD- formats). Although credit for developing the standard is often attributed unilaterally to Philips, it was "finalized" in 1997 by the DVD+RW Alliance. It was then abandoned until 2001, when it was heavily revised (in particular, the capacity increased from 2.8 GB to 4.7GB).[citation needed]

The recording layer in DVD+RW and DVD-RW discs is a phase change metal alloy (often GeSbTe) whose crystalline phase and amorphous phase have different reflectivity. The states can be switched depending on the power of the writing laser, so data can be written, read, erased and re-written. DVD-R and DVD+R discs use an organic dye.

A dual-layer DVD+RW specification was approved in March 2006 with a capacity of 8.5 GB.[2] However, manufacturing support for rewritable dual-layer discs did not materialize due to costs and expected competition from newer formats like Blu-ray and HD DVD, which boasted up to 25 GB on a single layer.