In politics, a defector is a person who gives up allegiance to one state or political entity in exchange for allegiance to another. More broadly, it involves abandoning a person, cause or doctrine to whom or to which one is bound by some tie, as of allegiance or duty.[1][2]

This term is also applied, often pejoratively, to anyone who switches loyalty to another religion, sports team, political party, or other rival faction. In that sense, the defector is often considered a traitor.[3][4] 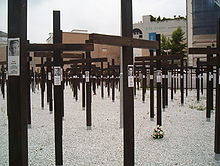 A memorial to those who could not cross the Berlin Wall alive stood for ten months in 2004 and 2005 near Checkpoint Charlie.

The physical act of defection is usually in a manner which violates the laws of the nation or political entity from which the person is seeking to depart. By contrast, mere changes in citizenship, or working with allied militia, usually does not violate any law.

For example, in the 1950s, East Germans were increasingly prohibited from traveling to the Western Federal Republic of Germany where they were automatically regarded as citizens according to Exclusive mandate. The Berlin Wall and fortifications along the Inner German border were erected by the Communist East German Democratic Republic in 1961 to enforce the policy. When people tried to "defect" from the GDR they were to be shot on sight. Several hundred people were killed along the border in their Republikflucht attempt. Official crossings did exist, but permissions to leave temporarily or permanently were seldom granted. On the other hand, the GDR citizenship of some "inconvenient" East Germans was revoked, and they had to leave their home on short notice against their will. Others, like singer Wolf Biermann, were prohibited from returning to the GDR.

During the Cold War, the many people illegally emigrating from the Soviet Union or Eastern Bloc to the West were called defectors. Westerners defected to the Eastern Bloc as well, often to avoid prosecution as spies. Some of the more famous cases were British spy Kim Philby, who defected to Russia to avoid exposure as a KGB mole, and 22 Allied POWs (one Briton and twenty-one Americans) who declined repatriation after the Korean War, electing to remain in China.

When the individual leaves his country and provides information to a foreign intelligence service, he is a HUMINT source defector. In some cases, defectors remain in the country or with the political entity they were against, functioning as a defector in place.

No Kum-Sok (later Kenneth Rowe) is known for having been a lieutenant in the North Korean Air Force during the Korean War who defected to South Korea. On September 21, 1953, he flew his MiG-15 to the Kimpo Air Base in South Korea, claiming that he wanted to get away from the "red deceit" and is often associated with Operation Moolah.[5]