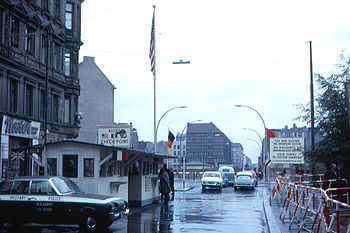 A view of Checkpoint Charlie in 1963, from the American sector

Checkpoint Charlie (or "Checkpoint C") was the name given by the Western Allies to the best-known Berlin Wall crossing point between East Berlin and West Berlin during the Cold War.

The Soviet Union prompted the construction of the Berlin Wall in 1961 to stop Eastern Bloc emigration westward through the Soviet border system, preventing escape across the city sector border from East Berlin to West Berlin. Checkpoint Charlie became a symbol of the Cold War, representing the separation of east and west. Soviet and American tanks briefly faced each other at the location during the Berlin Crisis of 1961.

After the dissolution of the Eastern Bloc and the reunification of Germany, the building at Checkpoint Charlie became a tourist attraction. It is now located in the Allied Museum in the Dahlem neighborhood of Berlin.

By the early 1950s, the Soviet method of restricting emigration was emulated by most of the rest of the Eastern Bloc, including East Germany.[1] However, in occupied Germany, until 1952, the lines between East Germany and the western occupied zones remained easily crossed in most places.[2] Consequently, the Inner German border between the two German states was closed and a barbed-wire fence erected.

Even after the closing of the Inner German border officially in 1952,[3] the city sector border in between East Berlin and West Berlin remained considerably more accessible than the rest of the border because it was administered by all four occupying powers.[2] Accordingly, Berlin became the main route by which East Germans left for the West.[4] Hence the Berlin sector border was essentially a "loophole" through which Eastern Bloc citizens could still escape.[3]

The 3.5 million East Germans who had left by 1961 totaled approximately 20% of the entire East German population.[5] The emigrants tended to be young and well educated.[6] The loss was disproportionately great among professionals — engineers, technicians, physicians, teachers, lawyers and skilled workers.[5]

The brain drain of professionals had become so damaging to the political credibility and economic viability of East Germany that the re-securing of the Soviet imperial frontier was imperative.[7] Between 1949 and 1961, over 2½ million East Germans fled to the West.[8] The numbers increased during the three years before the Berlin Wall was erected,[8] with 144,000 in 1959, 199,000 in 1960 and 207,000 in the first seven months of 1961 alone.[8][9] The East German economy suffered accordingly.[9]

On August 13, 1961, a barbed-wire barrier that would become the Berlin Wall separating East and West Berlin was erected by the East Germans.[7] Two days later, police and army engineers began to construct a more permanent concrete wall.[10] Along with the wall, the 830 mile zonal border became 3.5 miles wide on its East German side in some parts of Germany with a tall steel-mesh fence running along a "death strip" bordered by bands of ploughed earth, to slow and to reveal the prints of those trying to escape, and mined fields.[11] 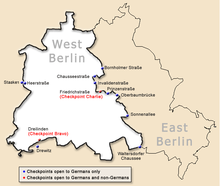 Map of Berlin Wall with location of Checkpoint Charlie 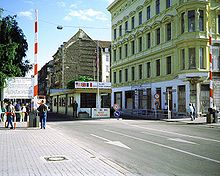 Checkpoint as viewed from the GDR checkpoint (June 1986)

Checkpoint Charlie was a crossing point in the Berlin Wall located at the junction of Friedrichstraße with Zimmerstraße and Mauerstraße, (which for older historical reasons coincidentally means 'Wall Street'). It is in the Friedrichstadt neighborhood. Checkpoint Charlie was designated as the single crossing point (by foot or by car) for foreigners and members of the Allied forces. (Members of the Allied forces were not allowed to use the other sector crossing point designated for use by foreigners, the Friedrichstraße railway station).

The name Charlie came from the letter C in the NATO phonetic alphabet; similarly for other Allied checkpoints on the Autobahn from the West: Checkpoint Alpha at Helmstedt and its counterpart Checkpoint Bravo at Dreilinden, Wannsee in the south-west corner of Berlin. The Soviets simply called it the Friedrichstraße Crossing Point (КПП Фридрихштрассе). The East Germans referred officially to Checkpoint Charlie as the Grenzübergangsstelle ("Border Crossing Point") Friedrich-/Zimmerstraße.

As the most visible Berlin Wall checkpoint, Checkpoint Charlie is frequently featured in spy movies and books. A famous cafe and viewing place for Allied officials, Armed Forces and visitors alike, Cafe Adler ("Eagle Café"), is situated right on the checkpoint. It was an excellent viewing point to look into East Berlin, while having something to eat and drink.

The checkpoint was curiously asymmetrical. During its 28-year active life, the infrastructure on the Eastern side was expanded to include not only the wall, watchtower and zig-zag barriers, but a multi-lane shed where cars and their occupants were checked. However the Allied authority never erected any permanent buildings, and made do with the well-known wooden shed, which was replaced during the 1980s by a larger metal structure, now displayed at the Allied Museum in western Berlin. Their reason was that they did not consider the inner Berlin sector boundary an international border and did not treat it as such.

Stand-off between Soviet and US tanks in October 1961

Main article: Berlin Crisis of 1961#Stand-off between US and Soviet tanks 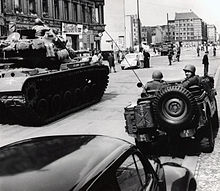 Soon after the construction of the Berlin Wall, a standoff occurred between U.S. and Soviet tanks on either side of Checkpoint Charlie. It began on 22 October as a dispute over whether East German guards were authorized to examine the travel documents of a U.S. diplomat named Allan Lightner passing through to East Berlin to see the opera. By October 27, 10 Soviet and an equal number of American tanks stood 100 metres apart on either side of the checkpoint. The standoff ended peacefully on October 28 following a US-Soviet understanding to withdraw tanks. Discussions between US Attorney General Robert F. Kennedy and KGB spy Georgi Bolshakov played a vital role in realizing this tacit agreement.[12]

The Berlin Wall was erected with great efficiency by the East German government in 1961, but naturally there were many means of escape that had not been anticipated. Checkpoint Charlie was initially blocked only by a gate; a citizen of the GDR (East Germany) smashed a car through it to escape, so a strong pole was erected. Another escapee approached the barrier in a convertible, took the windscreen down at the last moment and slipped under the barrier. This was repeated two weeks later, so the East Germans duly lowered the barrier and added uprights. 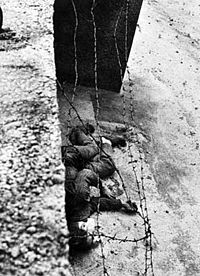 The body of East German Peter Fechter lying next to the Berlin Wall just after being shot in 1962 while trying to escape to the West.

On 17 August 1962, a teenaged East German, Peter Fechter, was shot in the pelvis by East German guards while trying to escape from East Berlin. His body lay tangled in a barbed wire fence, bleeding to death, in full view of the world’s media. American soldiers could not rescue him because he was a few yards inside the Soviet sector. East German border guards were reluctant to approach him for fear of provoking Western soldiers, one of whom had shot an East German border guard just days earlier. More than an hour later Fechter’s body was removed by the East German guards. A spontaneous demonstration formed on the American side of the checkpoint, protesting the action of the East and the inaction of the West. A few days later, the crowd stoned Soviet buses driving towards the Soviet War Memorial, located in the Tiergarten in the British sector. The Soviets tried to escort the buses with Armored Personnel Carriers (APCs). Thereafter, the Soviets were only allowed to cross via the Sandkrug Bridge crossing (which was the nearest to Tiergarten) and were prohibited from bringing APCs. Western units were deployed in the middle of the night in early September with live armaments and vehicles, in order to enforce the ban.

The Haus am Checkpoint Charlie museum opened two years after the wall was erected. 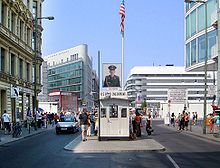 Checkpoint Charlie as tourist attraction. The ersatz guard house viewed from what was the American sector. Beyond it is a mast with an image of a Soviet soldier. The reverse side shows an American soldier (June 2003)

Although the wall was opened in November 1989 and the checkpoint booth removed on June 22, 1990,[13] the checkpoint remained an official crossing for foreigners and diplomats until German reunification during October 1990 when the guard house was removed; it is now on display in the open-air museum of the Allied Museum in Berlin-Zehlendorf.[14] The course of the former wall and border is now marked in the street with a line of cobblestones. A copy of the guard house and sign that once marked the border crossing was later built where Checkpoint Charlie once was. It resembles the first guard house erected during 1961, behind a sandbag barrier towards the border. Over the years it was replaced several times by guard houses of different sizes and layouts (see photographs). The one removed during 1990 was considerably larger than the first one and did not have sandbags.

Near the location of the guard house is the Haus am Checkpoint Charlie, a private museum opened in 1963 by Rainer Hildebrandt, which was augmented with a new building during the 1990s. The two Soldiers (one American and one Russian) represented at the Checkpoint Memorial were both stationed in Berlin during the early 1990s.

Developers demolished the East German checkpoint watchtower in 2000. The watchtower, which was the last surviving original Checkpoint Charlie structure, was demolished to make way for offices and shops. The city tried to save the tower but failed, as it was not classified as a historic landmark. As of August 2011, nothing has been built at this site and the original proposals for development have been terminated.

Checkpoint Charlie has become one of Berlin's primary tourist attractions. An open-air exhibit was opened during the summer of 2006. Gallery walls along the Friedrichstraße and the Zimmerstraße inform on escape attempts, how the checkpoint was expanded, and its significance during the Cold War, in particular the confrontation of Soviet and American tanks in 1961. An overview of other important memorial sites and museums on the division of Germany and the wall is presented as well. Tourists can have their photographs taken for a fee with actors dressed as allied military policemen standing in front of the guard house. Several souvenir stands with fake military items and stores proliferate as well.

The Wall goes up

Fall of the Wall

The checkpoint since the fall of the Berlin Wall