Project A Part II (Chinese: A計劃續集; literally Project A - The Sequel) is a 1987 Hong Kong martial arts action film directed by and starring Jackie Chan which serves as a sequel to his massive Asian hit film Project A. Although Jackie Chan stars as Dragon once again, the key players of Sammo Hung and Yuen Biao from the original film are absent.

The sequel continues with some runaway pirates making a vow that they must kill Dragon Ma (Jackie Chan) to take revenge for their late captain (Sam Pou).

On recommendation of the Chief of Marine Force (Kwan Hoi-San), Dragon Ma is transferred to be in charge of the district of Sai Wan after the Superintendent, Chun, is thought to be staging his arrests. Chun, however, has excellent record and the "criminals" he has been engaging are shot and killed, so there is no evidence against him.

Dragon Ma and his subordinates later meet Yesan (Maggie Cheung) and her cousin, Carina (Carina Lau), at a teahouse selling flowers to raise funds. He later learn that Carina is actually a member of the Chinese revolutionaries headed by Dr Sun Yat-sen.

Dragon identifies himself as the new superintendent of Sai Wai Police Station, after realizing that all of his policemen except one has been taking bribes. Ho, the only upright policeman around, tells them that a gangster named Tiger Ow with gambling dens and other illegal businesses is the kingpin of the town.

Dragon moves to confront Ow, but the police of his district are cowardly and unwilling to risk their lives to bring in the gangster. Dragon is forced to confront Tiger with only his three friends he brought with him from the Marine Police and Ho, the one straight cop in the district. After a big fight where the policemen are badly outnumbered, the Marine Police show up with guns, and force the gangsters to surrender. After one last fight with Ow, all the gangsters are sent to prison, inspiring the police at the station to do a better job.

Dragon is then put in charge of the Governor's security for a birthday ball he is throwing for his adopted daughter (Regina Kent). Chun corroborates with a group of revolutionaries (Rosamund Kwan and Sam Lui) to implicate Dragon in a theft of the Governor's diamond pendant. Dragon is arrested. After the ball Carina is kidnapped by agents of the Empress Dowager, who are working with Chun in order to recover a black book containing the names of anti-Manchu revolutionaries.

Next, Dragon, handcuffed by Ho to be transferred to the prison, go to find Carina and Yessan in order to recover the stolen diamond pendant. The Imperial agents and the revolutionary thief who stole the diamond pendant at the party end up hiding in Yessan's house. The Police Commissioner and Chun also turn up, leading to hilarious situations. Eventually the Imperial Agents are arrested, the revolutionary chief escapes, and Dragon is handcuffed by Chun so that he can be brought to the main prison. Carina flees town with the help of the revolutionaries. We see Chun has arranged for Dragon to be killed by a prison warden.

The pirates who swore vengeance turn up and attack both Dragon and Chun by axes around the town, but are eventually driven off after the police show up. Dragon is then handed over to the prison warden, who tied up in a sack and throws Dragon into the sea. The revolutionaries save Dragon, and take him back to their hideout above a medicine store. They try to enlist Dragon to join their cause, but he refuses to actively help them, saying that he is just a Hong Kong cop and all he can do is enforce the law and safeguard ordinary citizen's security.

The head of the pirates falls sick and the pirates enter the medicine store to ask for some herbs. Dragon intervenes and offers to pay for their medicine, causing the pirates to think much better of him.

The Imperial agents show up, and proceed to apprehend most of the revolutionaries, to gain possession of the black book. Dragon helps Yessan and Miss Pak run off while safeguarding the book from the agents. After a frantic run and fight scene, he beats up all of them with the help of the ax-wielding pirates. The Police Commissioner arrives with a huge police cohort and orders the arrest of Superintendent Chun, now fully aware Chun is trying to murder Dragon. Chun tries to run. A large bamboo-and-wood stage facade falls on Chun while he is attempting to get back his moneybag.

Dragon, on order of the Commissioner, takes charge of the police and the area. 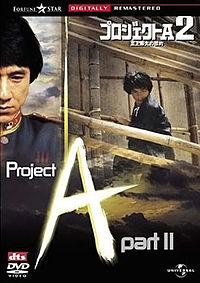