Canadian Museum of Civilization
For other uses, see CMC (disambiguation).

The Canadian Museum of Civilization (French: Musée canadien des civilisations) is Canada's national museum of human history and the most popular and most-visited museum in Canada.[2] It is located in the Hull sector of Gatineau, Quebec, directly across the Ottawa River from Canada's Parliament Buildings in Ottawa, Ontario. The Museum's primary purpose is to collect, study, preserve, and present material objects that illuminate the human history of Canada and the cultural diversity of its people.

For the visiting public, the Museum of Civilization is most renowned for its permanent galleries, which explore Canada's 20,000 years of human history, and for its architecture and stunning riverside setting. The Museum also presents an ever-changing program of special exhibitions that expand on Canadian themes and explore other cultures and civilizations, past and present. The Museum of Civilization is also a major research institution. Its professional staff includes leading experts in Canadian history, archaeology, ethnology, folk culture, and more.[3]

With roots stretching back to 1856, the Museum is one of North America's oldest cultural institutions.[4] It is also home to the Canadian Children's Museum,[5] the Canadian Postal Museum,[6] and an IMAX Theatre with 3D capacity.[7]

Some 400 members of the Public Service Alliance of Canada at the Museum were on strike from 21 September to 16 December 2009.[9]

The Museum of Civilization hosts a number of events year-round. The National Capital Commission’s Winterlude 2011 was launched on February 3 at the Museum with concerts, DJs, fireworks and live performances. The event was attended by an estimated 30,000 visitors to Museum grounds and 15,000 visitors inside the Museum. Canada Day celebrations included a citizenship ceremony, live entertainment and activities, workshops and an exclusive view of the fireworks, which brought more than 18,000 visitors to the Museum.

The Museum has four permanent exhibition galleries:[10] the Grand Hall,[11] the First Peoples Hall,[12] the Canada Hall, and Face to Face: The Canadian Personalities Hall[13]

The Grand Hall on the building's first level is the Museum's architectural centrepiece. It features a wall of windows 112 m (367 ft) wide by 15 m (49 ft) high, framing a view of the Ottawa River and Parliament Hill. On the opposite wall is a colour photograph of similar size. It captures a forest scene and is believed to be the largest colour photograph in the world.[11]

The picture provides a backdrop for a dozen towering totem poles and recreations of six Pacific Coast Aboriginal house facades connected by a boardwalk. The homes were made by First Nations artisans using large cedar timbers imported from the Pacific Northwest. The grouping of totem poles, combined with others in the Grand Hall, is said to be the largest indoor display of totem poles in the world.[14]

The Grand Hall also houses the original plaster pattern for the colossal Spirit of Haida Gwaii, the largest and most complex sculpture ever created by the celebrated Haida artist Bill Reid. The pattern was used to cast the bronze sculpture displayed outside the Canadian Embassy in Washington, D.C.. An image of the sculpture also appears on the Canadian twenty-dollar bill. 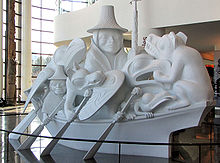 Also on the Museum's first level, this permanent exhibition narrates the history and accomplishments of Canada's Aboriginal peoples from their original habitation of North America to the present day. It explores the diversity of the First Peoples, their interactions with the land, and their on-going contributions to society. The Hall a groundbreaking, intensive collaboration that occurred between Museum curators and First Peoples representatives during the planning stages.

Chronicling 20,000 years of history, the Hall is separated into three larger zones:

"An Aboriginal Presence" looks at Aboriginal cultural diversity, achievements and prehistoric settlement of North America. Included are traditional stories about creation and other phenomena told by Aboriginal people such as Mi'kmaq Hereditary Chief Stephen Augustine who recounts the beginning of the world in the Creation Stories Theatre film.

"An Ancient Bond with the Land" examines the relationship between Aboriginal Peoples and the natural world.

"Arrival of Strangers - The Last 500 Years" examines Aboriginal history from the time of European contact to today. It examines early relations, the Métis, the clash of Christianity and Aboriginal beliefs, intergovernmental relations, the introduction of a wage economy, and post-War political and legal affirmation and civil rights. It also features a ten minute video about sustaining Aboriginal culture, and introduces visitors to Native art.

The Quilt of Belonging in the museum's collections, the largest work of textile art made about Canada

Canada Hall occupies most of the building's third level. Presented as a "streetscape," it invites the visitor to stroll through hundreds of years of Canadian history beginning with the arrival of Viking explorers: the first non-Aboriginal people known to have set foot on what is today Canadian soil. The journey starts on the East Coast circa 1000 AD and then moves westward through time, following Canada’s development from coast to coast. Along the way, visitors learn about the various waves of immigration that arrived on Canada's shores, the resources and opportunities that drew the newcomers, the discrimination and hardships that some new Canadians encountered, and the contributions all immigrant groups have made to their new country.

Highlights in Canada Hall include numerous life-size recreations, ranging from the interior of a Basque whaling ship circa 1560, to an airport lounge circa 1970. Other exhibits include a New France farmhouse; a stretch of main street, typical of an early Ontario town; an actual Ukrainian church that once stood in Alberta and was moved in its entirety to the museum; and a 10-metre (33 ft) long fishing boat that once operated off the coast of British Columbia.

Face to Face: The Canadian Personalities Hall introduces the visitor to people — in the museum's words — "whose vision and action had a significant impact on Canada and its inhabitants." Located on the Museum's top level, Face to Face is the Museum of Civilization's newest permanent exhibition. When it first opened on 29 June 2007, the exhibition profiled 27 individuals.[13] They included writers, artists, entrepreneurs, explorers, activists, and military and political leaders. The line-up of personalities will change over time, but the number profiled at any one time is expected to remain fairly constant. 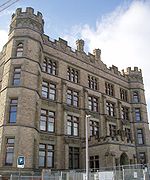 The museum's facilities since 1989

The museum was first founded in 1856 as the display hall for the Geological Survey of Canada, which was accumulating not only minerals, but biological specimens, and historical and ethnological artifacts. Originally located in Montreal the museum was moved to Ottawa in 1881.[16] In 1910, upon recommendation from Franz Boas, the anthropologist-linguist Edward Sapir was appointed as the first anthropologist in the newly-formed anthropology division of the museum. Soon after, the anthropologists Diamond Jenness and Marius Barbeau were hired. In 1910, now named the National Museum of Canada, it moved into the brand-new Victoria Memorial Museum Building on Metcalfe Street in downtown Ottawa. The National Gallery of Canada also occupied half a floor in the building. In 1968, the museum was split into the Museum of Nature and the Museum of Man, but both remained squeezed into the same building. In 1982, Pierre Trudeau's government announced that the Museum of Man would be moved to its own separate facility in Hull.

In response to criticisms that "Museum of Man" could be interpreted as gender-biased in light of modern sensibilities, a competition was launched in 1986 to find a new name. The National Museum of Man became the Canadian Museum of Civilization. In 1989, the museum moved in to the new facility. At the time of its opening, the cost of the museum had ballooned from an initial estimate of approximately $80 million to approximately $340 million. Despite initial criticisms of the perceived Disneyfication of the museum, its enormous costs, unique architecture, and unfinished exhibits from many quarters (including the Conservative government of Brian Mulroney), the museum soon became a major tourist attraction and was embraced by different political factions as a national symbol of "a pluralistic, multicultural society."[17] The museum attracts over 1.3 million visitors per year, making it Canada's most-visited museum.

The museum complex consists of two wings, the public and curatorial wings, surrounded by a series of plazas connected by a grand staircase. Naturalized park areas connect the museum and its plazas to the Ottawa River and nearby Jacques Cartier Park.[18]