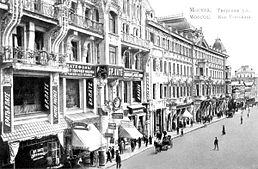 Tverskaya Street in the 19th century

Tverskaya Street (Russian: Тверская улица), known as Gorky Street (Russian: улица Горького) between 1935 and 1990, is the main and probably best-known radial street of Moscow, Russia. The street runs from the central Manege Square north-west in the direction of Saint Petersburg and terminated at the Garden Ring, giving its name to Tverskoy District. The route continues further as First Tverskaya-Yamskaya Street, Leningradsky Prospekt and Leningradskoye Shosse.

Tourists are told that Tverskaya Street existed as early as the 12th century. Its importance for the medieval city was immense, as it connected Moscow with its superior, and later chief rival, Tver. At that time, the thoroughfare crossed the Neglinnaya River. The first stone bridge across the Neglinnaya was set up in 1595.

In the 17th and 18th centuries, Tverskaya Street was renowned as the centre of Moscow's social life. The nobility considered it fashionable to settle in this district. Among the Palladian mansions dating from the reign of Catherine the Great are the residence of the mayor of Moscow (1778–82, rebuilt in ), and the English Club (1780s). The mayor's residence among a number of other historic buildings was moved about 14 meters for the widening of the Gorky street during Stalin's time. On the square before it stands a statue of the legendary founder of Moscow, Yuri Dolgoruky, erected for the city's 800th anniversary.[1]

During the imperial period, the importance of the thoroughfare was highlighted by the fact that it was through this street that the tsars arrived from the Northern capital to their Kremlin residence. Several triumphal arches were constructed to commemorate the coronation ceremonies. In 1792, the Tverskaya Square was laid out before the residence of the governor of Moscow as a staging ground for mass processions and parades. In 1947, the square was decorated with an equestrian statue of Prince Yury Dolgoruky, founder of Moscow.

A bystreet, Gazetny Lane, with Central Telegraph Building on the left. This side street figures prominently in the novel Anna Karenina

During Pushkin's time, the Tverskaya was lined with five churches. The poet wove his impressions from the street into the following stanza of Eugene Onegin:

Towards the end of the 19th century, the street was reconstructed, with stately neoclassical mansions giving way to grandiose commercial buildings in an eclectic mixture of historical styles. A characteristic edifice of the time is the eclectic National Hotel (1901), whose interior is a landmark of Russian Art Nouveau. In 1888 the actor, theatre director and founder of the Moscow Art Theatre, Constantin Stanislavski, rented the Ginzburg House on the street and had it converted into a luxurious clubhouse with its own large stage and several exhibition rooms, in order to house his newly-formed Society of Art and Literature.[2] The Society gave its last performance there on 3 January 1891 and the building burnt down on the night of 10 January.[3] 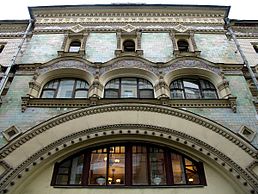 Between the Russian Revolution of 1917 and the rise of Stalinist architecture in mid-1930s, the street acquired three modernist buildings - constructivist Izvestia Building by Grigory Barkhin (1925–1927, Pushkin Square), Central Telegraph Building (1927–29, 5 Tverskaya), a modernist masterpiece by Ivan Rerberg, and a stern "black cube" of Lenin Institute in Tverskaya Square (1926) by Stepan Chernyshyov.

Further expansion occurred in line with Stalin's 1935 master plan. During that period, all the churches and most other historic buildings were torn down in order to widen the street and replace low-rise buildings with larger, early Stalinist apartment blocks and government offices. Arkady Mordvinov, who handled this ambitious project, retained some historical buildings, like the ornately decorated Savvinskoye Podvorye by Ivan Kuznetsov. This building was moved to a new foundation north from the new street line, and is now completely enclosed inside Mordvinov's Stalinist block at 6, Tverskaya Street.

The project was only partially completed before World War II; more Stalinist blocks appeared in 1940s and 1950s, still leaving a lot of 19th century buildings. Most of them were torn down later, with a few exceptions like Yermolova Theatre still standing. Intourist Hotel, a 23-story tower built in 1970, has been demolished in 2002 and replaced with an equally controversial hotel block.

Tverskaya Street runs from the Manege Square through the Tverskoy District and the crossing with the Boulevard Ring, known as Pushkin Square, to the Garden Ring. Its extension, First Tverskaya-Yamskaya Street, continues further north-west right up to Belorussky Rail Terminal (Tverskaya Zastava Square), changing its name again into Leningradsky Prospekt. It keeps the same direction before diverging into Volokolamskoye Shosse and Leningradskoye Shosse (literally, Leningrad Expressway).

Tverskaya Street is the most expensive shopping street in Moscow and Russia. According to an index published by global real estate company Colliers International in 2008 it is now the 3rd most expensive street based on commercial rents in the world. It is the center of the city's nightlife and entertainment.

Plans for the reconstruction of Tverskaya radius into a grade-separated freeway, already under way in remote parts of the route (see Leningradsky Prospekt Reconstruction for a complete schedule), have been authorized for Tverskaya Zastava and Pushkin Square in April, 2007, to be completed in 2009; work in already underway at the first location. Both squares will acquire complex multi-level, grade-separated crossings and underground shopping malls, despite objections from preservationists and traffic experts.