New York State Route 73 (NY 73) is a state highway located entirely within Essex County, New York, United States. The highway begins at an intersection with NY 86 in the village of Lake Placid and ends at a junction with U.S. Route 9 (US 9) north of the hamlet of Underwood in the extreme southwestern corner of the town of Elizabethtown. NY 73 meanders through a mountainous region of Adirondack Park and passes by several named peaks, including Porter Mountain and Lower Wolfjaw Mountain. Along the way, the route has a short concurrency with NY 9N in the town of Keene.

In the early 19th century, Lake Placid and Keene were connected by the North West Bay Road, an east–west highway linking Hopkinton to Westport. The highway was initially a crude, impassable road; however, it was significantly improved by the state of New York in the mid-1810s. A highway linking Keene to Underwood was constructed by 1846; at Underwood, the road connected to a stagecoach road that went from Albany to the Canadian border. The latter road became the basis for most of modern US 9.

NY 73 was assigned as part of the 1930 renumbering of state highways in New York from NY 28N in Tahawus to NY 22 in Ticonderoga. The portion of the route from Tahawus to North Hudson followed the Blue Ridge Road; from North Hudson to Schroon, NY 73 overlapped US 9. At the time, modern NY 73 was designated as New York State Route 86A from Lake Placid to Keene. By the following year, the remainder of current NY 73 had become New York State Route 427. NY 73 was cut back to Schroon ca. 1936 while NY 427 was replaced by an extended NY 86A ca. 1938. In the 1950s, NY 73 was extended northward to Lake Placid, supplanting NY 86A. The eastern terminus of NY 73 was moved to the vicinity of Underwood ca. 1973, and the former routing of NY 73 from Schroon to Ticonderoga became NY 74.

Route 73 begins at a traffic light along NY 86 near the eastern end of the village of Lake Placid. The highway heads towards the southwest, passing homes as Sentinel Road. At the intersection with Mill Pond Road, Route 73 passes a small pond, crossing over an associated creek. For that short time, the highway takes on a more southerly direction, mainly to the southeast. The surroundings of the highway remain the same as NY 73 leaves Lake Placid via Cascade Road.[3] 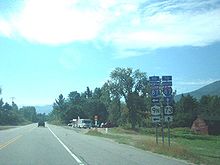 Route 73 heads into North Elba, where it passes Lake Placid Airport. There, County Route 35 (CR 35) merges from the northwest, providing a bypass around the village of Lake Placid to NY 86. Just south of North Elba, Route 73 passes the Lake Placid Olympic Ski Jumping Complex, accessible via NY 910M to nearby John Brown's Farm at the intersection with CR 35. The highway crosses the West Branch of the Ausable River, intersecting with CR 21 at an elevation of 1,800 feet (550 m).[3][4]

Cascade Road makes several turns, passing south of the Craig Wood Golf Course. After the golf course, Route 73 climbs in elevation, up to 2,000 feet (610 m).[4] The highway turns from the southeast to the east, and to the southeast once more as it rounds Round Lake. The road passes Mud Pond, where it turns to the northeast along the side of a high ridge. Pitchoff Mountain is directly to the northwest as Route 73 passes Upper Cascade and Lower Cascade Lakes.[3] 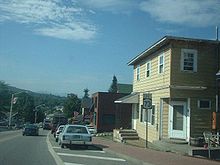 Route 73 begins to descend in elevation, while CR 51 splits off and Route 73 heads into Keene. After crossing the East Branch of the Ausable River, Route 73 merges in with NY 9N. The two roads continue to drop in elevation, passing and circling mountains as they head along. After Norton Cemetery, Route 9N splits off to the east and Route 73 continues southward. Route 73 now runs along the East Branch, intersecting with county and local roads as it heads southward.[3]

The highway heads along the base of Porter Mountain and into Keene Valley, crosses Johns Brook and heads through downtown. Lower Wolfjaw Mountain, which averages the same height as Porter, is nearby. Route 73 continues, eventually crossing the Ausable River branch. There are a few more ponds and mountains before NY 73 ends at an intersection with US 9.[3]

According to estimates made by the New York State Department of Transportation in 2009, NY 73 serves an average of 1,950 vehicles from US 9 to the east end of the NY 9N overlap in Keene. The overlap with NY 9N accumulated an average of 4,360 vehicles, with the stretch up to the control station at NY 913Q having a less amount of traffic. After NY 913Q, the average increases, peaking at 4,810 vehicles per day at NY 86 in Lake Placid.[2]

The area that is now known as the hamlet of Keene—the modern junction of NY 9N and NY 73—was first settled in the first few years of the 19th century. Many of the early settlers arrived in the region by traveling along a rough and nearly unusable highway connecting what became Keene to Jay in the north and Lewis in the east.[5] By 1810, part of the crude roadway had been supplanted by a privately funded highway leading westward from Westport to at least North Elba and possibly to Saranac Lake by way of Keene. On April 5, 1810, the New York State Legislature passed an act establishing a new state highway linking Westport to Hopkinton by way of Keene and Saranac Lake. The highway incorporated the entirety of the pre-existing roadway between Westport and Saranac Lake.[6]

NY 73 through Keene Valley as seen from Rooster Comb Mountain

Initially, the state highway was poorly constructed and largely impassable, mirroring the condition of the roadways that preceded it. An act passed by the state legislature on June 19, 1812, indicated that the funds that had been allocated to the highway were "entirely inadequate to open and improve" the road. On April 17, 1816, the state attempted to correct the issue by approving a measure that appointed two sets of commissioners to oversee the reconstruction of the highway. Each set was to work on opposite ends of the route and eventually converge at a point midway along the route. Work on the highway was completed by 1818. The road was officially named the "North West Bay Road"; however, it eventually became known as the "Old Military Road".[6] The route did not enter the village of Lake Placid; instead, it bypassed it to the southwest. This portion of the highway is still known today by the latter name.[7]

The highway through Keene Valley from Underwood to Keene was built by 1846.[8] At its southern end, it connected to a major stagecoach road that connected Albany to the Canadian border. The route fostered the rise of local lumber and tanning industries; up to 40 wagon loads of timber used the stagecoach route daily. Various hotels and taverns opened in the nearby town of North Hudson to serve travelers along the route.[9]

In 1909, the state of New York began to take control of many private highways across the state under the terms of the new highway law developed in 1908.[10] One of these highways was the old north–south stagecoach road from Albany to Canada. Most of the highway north of modern NY 8 in Chester became the northern half of Route 22, an unsigned legislative route, under the text of the highway law.[11] In 1913, the New York State Legislature created Route 22-b, a spur route connecting Route 22 in Schroon to the then-village of Ticonderoga.[12][13] On March 1, 1921, Route 22-b became part of Route 48, a new route created as part of a partial renumbering of New York's legislative route system.[14] The path of the former Albany–Canada stagecoach route was largely designated as US 9 in 1927.[15] 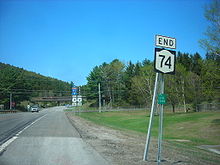 Signage at the former western terminus of NY 73 in Schroon

NY 73 was assigned as part of the 1930 renumbering of state highways in New York; however, it did not initially follow any of its modern routing. It began at an intersection with NY 28N in Tahawus and followed the Blue Ridge Road east to US 9 in North Hudson. From there, it overlapped US 9 south to Schroon, where it proceeded eastward on the former legislative Route 48 to Ticonderoga, where it ended at a junction with NY 22. At the time, modern NY 73 from Lake Placid to Keene—identical to the old North West Bay Road east of the Lake Placid area—was assigned NY 86A.[1][16] The remainder of what is now NY 73 from Keene south to Underwood was designated as NY 427 within a year's time.[16][17] 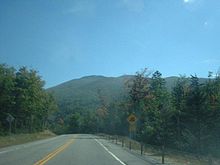 The entire route is in Essex County.