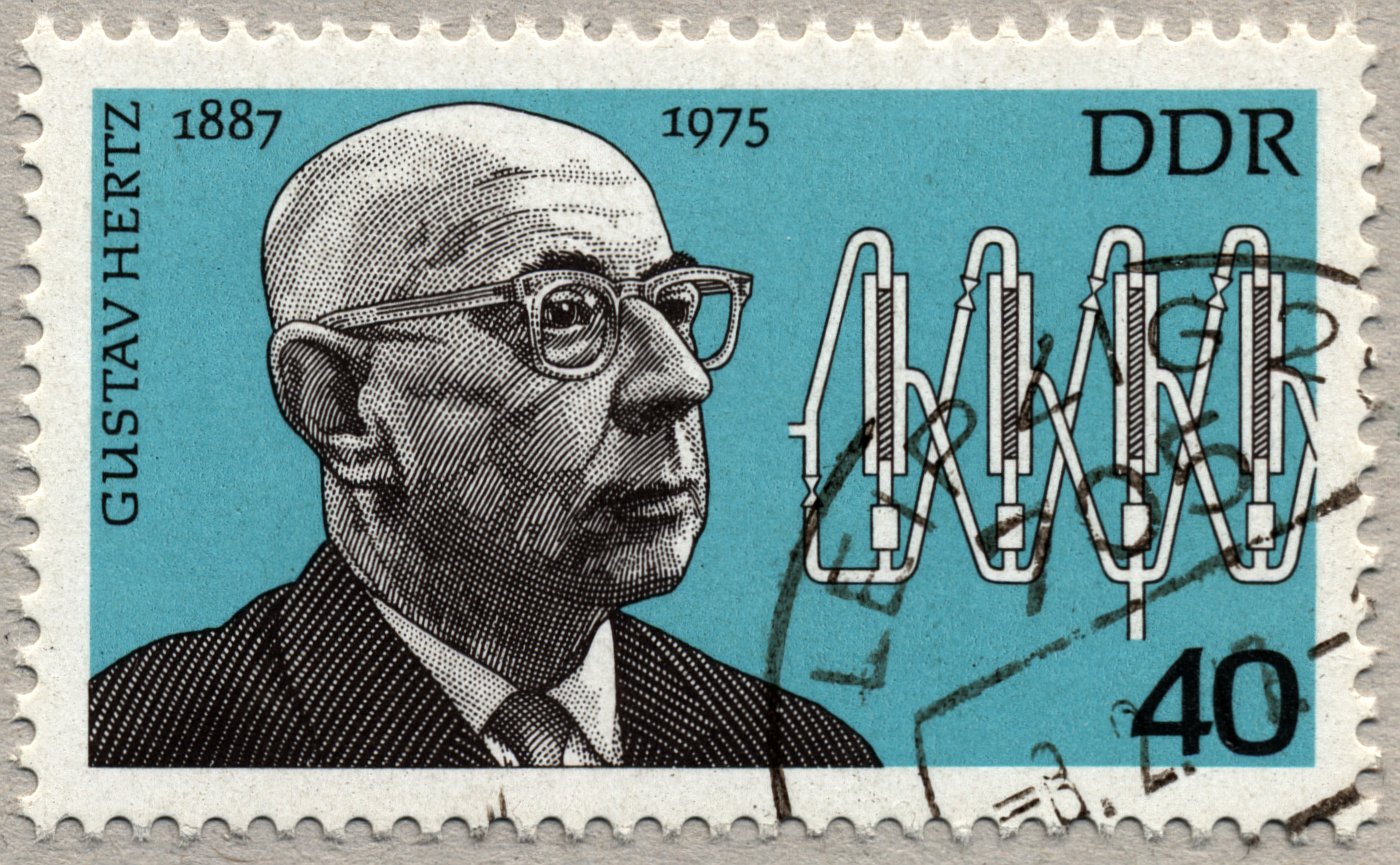 Gustav Ludwig Hertz ( , &ndash; , ) was a German and Nobel Prize winner, and a nephew of .

From 1911 to 1914, Hertz was an assistant to Rubens at the University of Berlin. It was during this time that Hertz and performed experiments on inelastic electron collisions in gases, [ J. Franck and G. Hertz "Über Zusammenstöße zwischen Elektronen und Molekülen des Quecksilberdampfes und die Ionisierungsspannung desselben", "Verh. Dtsch. Phys. Ges." 16 457–467 (1914).] known as the Franck–Hertz experiments, and for which they received the in 1925. [ Hentschel, 1996, Appendix F; see entry for Hertz.]

During , Hertz served in the military from 1914. He was seriously wounded in 1915. In 1917, he returned to the University of Berlin as a . In 1920, he took a job as a research physicist at the Philips Incandescent Lamp Factory in , which he held until 1925. [ [http://nobelprize.org/nobel_prizes/physics/laureates/1925/hertz-bio.html Hertz] – Nobel Biography.]

In 1925, Hertz became ordinarius professor and director of the Physics Institute of the . In 1928 he became ordinarius professor of experimental physics and director of the Physics Institute of the Berlin Technische Hochschule (BTH) in Berlin-Charlottenburg. While there, he developed an isotope separation technique via gaseous diffusion. Since Hertz was an officer during WW I, he was temporarily protected from National Socialist policies and the , but eventually the policies and laws became more stringent, and at the end of 1934, he was forced to resign his position at BTH, as he was classified as a “second degree part-Jew”. He then took a position at , as director of Research Laboratory II. While there, he continued his work on and , but he eventually discontinued his work on isotope separation. He held this position until he departed for the in 1945. [ [http://nobelprize.org/nobel_prizes/physics/laureates/1925/hertz-bio.html Hertz] – Nobel Biography.] [ Hentschel, 1996, 23 and Appendix F – see entry for Hertz.] [ Mehra and Rechenberg, 2001, 197.]

Hertz, , director of his private laboratory "Forschungslaboratorium für Elektronenphysik", [ [http://www.sachsen.de/sadra/887.htm sachen.de] - "Zur Ehrung von Manfred von Ardenne".] , ordinarius professor at the and director of the Kaiser-Wilhelm Institut für physikalische Chemi und Elektrochemie (KWIPC) in Berlin-Dahlem, and , ordinarius professor and director of the Physical Chemistry Institute at the Berlin Technische Hochschule, had made a pact. The pact was a pledge that whoever first made contact with the Russians would speak for the rest. The objectives of their pact were threefold: (1) Prevent plunder of their institutes, (2) Continue their work with minimal interruption, and (3) Protect themselves from prosecution for any political acts of the past. [Heinemann-Grüder, 2002, 44.] Before the end of , Thiessen, a member of the Nationalsozialistische Deutsche Arbeiterpartei, had Communist contacts. [ Hentschel, 1996, Appendix F; see the entry for Thiessen.] On , Thiessen arrived at von Ardenne’s institute in an armored vehicle with a major of the Soviet Army, who was also a leading Soviet chemist. [Oleynikov, 2000, 5.] All four of the pact members were taken to the Soviet Union. Hertz was made head of Institute G, in Agudseri (Agudzery), [ Oleynikov, 2000, 11-12.] [ Naimark, 1995, 213.] about 10 km southeast of and a suburb of Gul’rips (Gulrip’shi). Topics assigned to Gustav Hertz’s Institute G included: (1) Separation of isotopes by diffusion in a flow of inert gases, for which Gustav Hertz was the leader, (2) Development of a condensation pump, for which was the leader, (3) Design and build a mass spectrometer for determining the isotopic composition of uranium, for which Werner Schütze was the leader, (4) Development of frameless (ceramic) diffusion partitions for filters, for which Reinhold Reichmann was the leader, and (5) Development of a theory of stability and control of a diffusion cascade, for which was the leader; [ Oleynikov, 2000, 12-13 and 18.] [ Kruglov, 2002, 131.] Barwich had been deputy to Hertz at Siemens. [Naimark, 1995, 209.] Other members of Institute G were Werner Hartmann and Karl-Franz Zühlke. [ Maddrell, 2006, 179-180.] Von Ardenne was made head of Institute A, [ Goals of Manfred von Ardenne’s Institute A included: (1) Electromagnetic separation of isotopes, for which von Ardenne was the leader, (2) Techniques for manufacturing porous barriers for isotope separation, for which Peter Adolf Thiessen was the leader, and (3) Molecular techniques for separation of uranium isotopes, for which was the leader. In his first meeting with Lavrentij Beria, von Ardenne was asked to participate in building the bomb, but von Ardenne quickly realized that participation would prohibit his repatriation to Germany, so he suggested isotope enrichment as an objective, which was agreed to. By the end of the 1940s, nearly 300 Germans were working at the institute, and they were not the total work force. See Oleynikov, 2000, 10-11.] [ Institute A was used as the basis for the Sukhumi Physical-Technical Institute. See Oleynikov, 2000, 12.] in Sinop, [ Oleynikov, 2000, 11-12.] [ Naimark, 1995, 213.] a suburb of . Volmer went to the Nauchno-Issledovatel’skij Institut-9 (NII-9, Scientific Research Institute No. 9), [ Today, NII-9 is the Bochvar All-Russian Scientific Research Institute of Inorganic Materials, Bochvar VNIINM. See Oleynikov, 2000, 4.] in Moscow; he was given a design bureau to work on the production of . [ Oleynikov, 2000, 13.] In Institute A, Thiessen became leader for developing techniques for manufacturing porous barriers for isotope separation. [Oleynikov, 2000, 11.]

In 1949, six German scientists, including Hertz, Thiessen, and Barwich were called in for consultation at Sverdlovsk-44, which was responsible for uranium enrichment. The plant, smaller than the American Oak Ridge gaseous diffusion plant, was getting only a little over half of the expected 90% or higher enrichment. [ Holloway, 1994, 191-192.]

Upon return from the Soviet Union, Hertz became ordinarius professor at the . From 1955 to 1967, he was also the chairman of the Physical Society of the Deutsche Demokratische Republik; he was honorary chairman from 1967 to 1975. [ Hentschel, 1996, Appendix F; see entry for Hertz.]

In 1919, Hertz married Ellen née Dihlmann, who died in 1941. They had two sons, and Johannes Hertz, both physicists. [ [http://nobelprize.org/nobel_prizes/physics/laureates/1925/hertz-bio.html Hertz] – Nobel Biography.]

*Kruglov, Arkadii "The History of the Soviet Atomic Industry" (Taylor and Francis, 2002)

*Oleynikov, Pavel V. "German Scientists in the Soviet Atomic Project", "The Nonproliferation Review" Volume 7, Number 2, 1 – 30 [http://cns.miis.edu/pubs/npr/vol07/72/72pavel.pdf (2000)] . The author has been a group leader at the Institute of Technical Physics of the Russian Federal Nuclear Center in (Chelyabinsk-70).