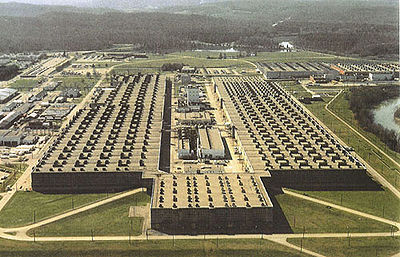 K-25 is a former uranium enrichment facility of the Manhattan Project which used the gaseous diffusion method. The plant is located in Oak Ridge, Tennessee, on the southwestern end of the Oak Ridge Reservation.

The code name "K-25" was a combination of the "K" from the Kellex Corporation, the initial contractors of the plant, and a World War II-era code designation for uranium-235.[1][2]

The gaseous diffusion method enriches uranium by separating uranium-235 from uranium-238. Based on the principle that molecules of a lighter isotope would pass through a porous barrier more readily than molecules of a heavier one, gaseous diffusion of uranium hexafluoride produced a gas increasingly rich in uranium-235 as the heavier uranium-238 was separated out in a system of cascades. As it produced minute amounts of final product compared to the total amount of uranium in the plant, gaseous diffusion required a massive facility to house the thousands of cascades and consumed enormous amounts of electric power. Uranium hexafluoride is highly corrosive, and the recently developed plastic teflon was used to coat the valves and seals that came in contact with the gas.

Gaseous diffusion was one of three isotope separation processes that provided uranium-235 for the Hiroshima weapon (Little Boy) - the other two being electromagnetic separation and liquid thermal diffusion. All of the plants were located on the Oak Ridge reservation. The Y-12 electromagnetic separation plant was located about 8 miles (13 km) northeast of the K-25 plant. The S-50 liquid thermal diffusion plant, using convection to separate the isotopes in thousands of tall columns, was built next to the K-25 power plant, which provided the necessary steam. Much less efficient than K-25, the S-50 plant was torn down after the war.

Gaseous diffusion was the only uranium enrichment process used during the Cold War. K-25 was the prototype for later Oak Ridge gaseous diffusion facilities and those at Paducah, Kentucky and Portsmouth, Ohio.[5] Today, uranium isotope separation is preferably done by the much more energy-efficient ultra centrifuge process.

The United States Department of Energy contracted with Bechtel Jacobs to dismantle and demolish the K-25 facility. The work under the current contract is scheduled to be completed by the end of 2011, though additional cleanup work is expected to continue beyond that time.[6][7] Bechtel Jacobs will not complete the D&D of the K-25 building under its contract. It will be completed by the subsequent contractor.[8]