Orlando Pirates are a South African football (soccer) club based in Parktown, Johannesburg that plays in the Premier Soccer League.

The club was founded in 1937 and was originally based in Orlando, Soweto.[1] They are named 'Pirates' after the 1940 film The Sea Hawk starring Errol Flynn.[2] Orlando Pirates are the first club since the inception of the Premier Soccer League in 1996 to have won three major trophies in a single season, having won the domestic league, the Nedbank Cup and the MTN 8 during the 2010/2011 season.[3] Orlando Pirates are famously known for being the only team in South Africa to win the African Champions League in 1995.

Orlando Pirates is one of South Africa’s oldest football clubs being formed in 1937 in Orlando East, Soweto.[1][4] The club's performances over the years have served as an inspiration for young soccer players to strive to play the Beautiful Game at the highest level in the black and white colours of the ‘Buccaneers’.

The founders of Orlando Pirates included offspring of migrant workers who moved from rural areas to work in the gold mines of Gauteng. Boys in Orlando came together at every available opportunity in open spaces and in informal groupings to play soccer. That original club was called the Orlando Boys Club.

In 1940, Buthuel Mokgosinyane, the first president, bought the first team kit with his own funds. Orlando Boys participated in Johannesburg Bantu Association's Saturday League, where they won the Division Two title and gained promotion to Division One in 1944.[1] Andrew Bassie, a key member of the team, suggested the new name 'Orlando Pirates'. The team composed the camp's war cry 'Ezimnyama Ngenkani'. 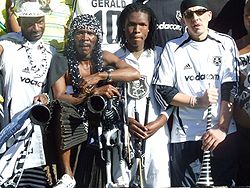 Many other cup triumphs in domestic soccer have also been recorded, including Vodacom Challenge title victories in the inaugural 1999 tournament and in 2005. But the African continent and other areas of the soccer world took notice of Orlando Pirates Football Club when they won the African Champions Cup (now known as the Champions League) in 1995 and the African Super Cup a year later. Pirates were and still are the only Southern Hemisphere club to have won the African Champions League. This achievement resulted in the club being honoured by the first State President of the new democratic South Africa, Nelson Mandela – another first for a South African sporting team.

In 2005, Orlando Pirates achieved Superbrand status. Superbrands is an international company that identifies and rewards the leading brands around the world; Pirates are the only South African sports team next to the Springboks and Proteas to be given this status.[5]

Club chairman, Irvin Khoza, who also served on the World Cup Bid Committee, must be credited with the club’s rise to fame over the past few years as the Orlando Pirates supporters – who are nicknamed ‘The Ghost’ – have had much to cheer about.

Kaizer Chiefs chairman Kaizer Motaung and his Jomo Cosmos counterpart Jomo Sono were popular players of the highest calibre for the Buccaneers before starting their own clubs. Their playing history is deeply entrenched in the black and white colours of Orlando Pirates.

The Soweto derby between Kaizer Chiefs and Orlando Pirates is one of the most fiercely contested derbies in world soccer. And in contrast to most of the other games played in the Premier Soccer League in SA, matches between the two arch rivals attract a full house almost without fail. 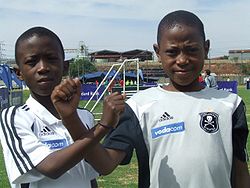 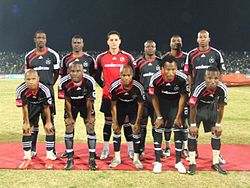 As of August 2, 2011 Note: Flags indicate national team as has been defined under FIFA eligibility rules. Players may hold more than one non-FIFA nationality.

In the South African PSL, only five non-South African nationals can be registered. Namibians born before 1990 do not count as foreigners.