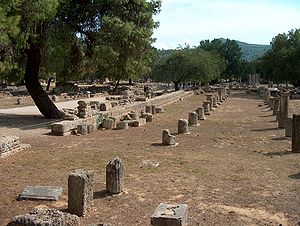 An Olympiad is a period of four years, associated with the Olympic Games of Classical Greece. In the Hellenistic period, beginning with Ephorus, Olympiads were used as calendar epoch. In this reckoning, the first Olympiad lasted from the summer of 776 BC to that of 772 BC. By extrapolation, the 3rd year of the 697th Olympiad begins in (Northern-Hemisphere) summer 2011.

Today, an Olympiad refers to a period beginning January 1 of a year in which the Summer Olympics are due to occur, and lasting four years. The first modern Olympiad began in 1896, the second began in 1900, and so on. The 29th began in 2008 (see the Olympic Charter).

The sophist Hippias was the first writer to publish a list of victors at the Olympic Games, and by the time of Eratosthenes, it was generally agreed that the first Olympic games had happened in the summer of 776 B.C.[1] The combination of victor lists and calculations from 776 B.C. onwards enabled Greek historians to use the Olympiads as a way of reckoning time that did not depend on the time reckonings of one of the city-states. (See Attic calendar.) The first to do so consistently was Timaeus of Tauromenium in the third century B.C. Nevertheless, since for events in the early history of the games the reckoning was used in retrospect, some of the dates given by later historian for events before the 5th century B.C. are very unreliable.[2] In the 2nd century A.D. Phlegon summarised the events of each Olympiad in a book called Olympiads, and an extract from this has been preserved by the Byzantine writer Photius.[3] Christian chroniclers continued to use this Greek system of dating as a way of synchronising biblical events with Greek and Roman history. In the 3rd century A.D. Africanus compiled a list of Olympic victors up to 217 B.C., and this list has been preserved in the Chronicle of Eusebius.[4]

Start of the Olympiad

An Olympiad started with the games, which were held at the beginning of the Olympic new year, which fell on the full moon closest to the summer solstice. (After the introduction of the Metonic cycle about 432 BC, the start of the Olympic year was determined slightly differently).

Though the games were held without interruption, on more than one occasion they were celebrated by others than the Eleiäns. The Eleiäns declared such games Anolympiads (non-Olympics), but it is assumed the winners nevertheless were recorded.

The End of the Era

In the 3rd century AD the games had dwindled to the point where historians are not certain whether after 261 they were still held every four years. During the early years of the Olympiad, any physical benefit coming out of a sport was banned. Some winners were recorded though, until the last Olympiad in 393. In 394, Roman Emperor Theodosius I outlawed the games at Olympia as pagan. Though it would have been possible to continue the reckoning by just counting four-year periods, by the middle of the 5th century AD reckoning in Olympiads had fallen into disuse.

For the modern Olympics the term was long used to indicate the games themselves, but the IOC now uses it to indicate a period of four years.

The modern Olympiad is a period of four consecutive calendar years, beginning on the first of January of the first year and ending on the thirty-first of December of the fourth year. The Olympiads are numbered consecutively from the first Games of the Olympiad celebrated in Athens in 1896. The XXIX Olympiad has begun on 1 January 2008.[9]

Note, however, that the official numbering of the Winter Olympics does not count Olympiads—it counts only the Games themselves. For example:

Some media outlets have from time to time referred to a particular (e.g., the nth) Winter Olympics as "the Games of the nth Winter Olympiad", perhaps believing it to be the correct formal name for the Winter Games by analogy with that of the Summer Games. Indeed, at least one IOC-published article has applied this nomenclature as well.[11] However, such usage is not consistent with the numbering discussed above.

The U.S. Olympic Committee often uses the term quadrennium, which it claims refers to the same four-year period. However, it indicates these quadrennia in calendar years, starting with the first year after the Summer Olympics end ending with the year the next Olympics are held. This would suggest a more precise period of four years, but the 2001–2004 Quadrennium would then not be exactly the same period as the XXVIIth Olympiad.[12]

A Cultural Olympiad is a concept protected by the International Olympic Committee and may be used only within the limits defined by an Organizing Committee for the Olympic Games. From one Games to the next, the scale of the Cultural Olympiad varies considerably, sometimes involving activity over the entire Olympiad and other times focusing on specific periods within it. Baron Pierre de Coubertin established the principle of ‘Olympic Art Competitions’ at a special congress in Paris in 1906, and the first official programme was presented during the 1912 Games in Stockholm. These competitions were also named the ‘Pentathlon of the Muses’, as their purpose was to bring artists to present their work and compete for ‘art’ medals across five categories: architecture, music, literature, sculpture and painting. Today, while there are no competitions as such, cultural and artistic practice is showcased via the Cultural Olympiad.

At the 2010 Winter Olympics in Vancouver, Cultural Olympiad presented the Cultural Olympiad Digital Edition (or CODE for short). following the tag-line "Connect.Create.Collaborate.," the festival brought both national and international artists to present digital art, music, and film.

The Olympiad (L'Olimpiade) is also the name of some 60 operas, of which the plot is set in Ancient Greece.